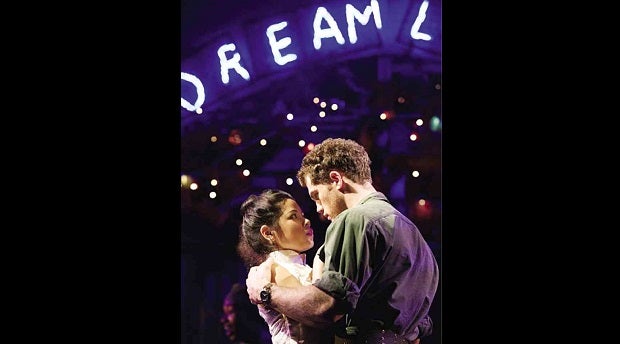 The heat’s still on in the new ‘Miss Saigon’

LONDON—I saw a May 6 preview of the “Miss Saigon” revival (at the Prince Edward Theatre), and what struck me first was that this is a more compact (and therefore more tour-friendly) version of the musical. The sets are now more functional than theatrical; obviously, the technical team is bent on avoiding complications and mechanical hiccups.

Laurence Connor also directed the “Miss Saigon” I saw in Sydney in 2007, a show that toured the United Kingdom in the past years. Except for its minimal use of the projector, the current revival seems to have retained many of the elements of the 2007 production.

The pivotal helicopter scene is now a mix of digital projection and live props, which comes off as more amazing to theatergoers because, unlike in the original “Miss Saigon” which staged the scene as an elaborate play of lights, sounds and shadows, the chopper’s landing and takeoff in this one seem more visible.

The “Bui Doi” number features many more real kids on video. The Ho Chi Minh statue has now been replaced with a huge bust that descends on stage. In the splashy “American Dream” number, a huge Statue of Liberty crown materializes before the limousine appears. Meanwhile, the bamboo mats that usually unfurled during the “Morning of the Dragon” march are gone.

I would say that this 2014 “Miss Saigon” is more a revival and not a reimagined version. The basic storyline and all the scenes are intact (versus, let’s say, rearranging the scenes so it’s told chronologically) and no radical shake-up has been made, only a lot of directorial choices in terms of staging and mounting.

The biggest change would be the new lyrics for certain songs—even an entire new song called “Maybe” to replace Ellen’s “It’s Her or Me/Now That I’ve Seen Her” in Act 2. The song succeeds in making Ellen more human, and the lyrics paint a more realistic and logical reaction to the situation, compared to the the original version that made her more of a drama queen.

The opening number “The Heat is On in Saigon” now sports new lyrics, with Kim (Eva Noblezada) singing, “I’m so much more than you see” in place of “I have a heart like the sea…”

The original version of “The Movie in My Mind” also had the veteran bar girl Gigi singing: “The movie plays and plays/The screen before me fills/He takes me to New York/He gives me dollar bills…”

Those lines have now been changed to: “The movie plays and plays/I’ll find my true romance/He takes me to a place/Where I don’t have to dance.”

And in “I Still Believe” (if I remember correctly—I was jotting down the lines in the dark), Kim’s new lyrics are “Last night I dreamt you held me/We slept here side by side/You whispered softly to me/I heard you speak my name, I cried/Though I know it’s been so many years/In the silence of my secret tears/You are here, still…”

So, how are Noblezada as Kim and Rachelle Ann Go as Gigi?

Noblezada is a compelling actress—raw, with no hint of Method at all in her acting. She is the first person you see onstage, even before the other girls come in, and right away you feel her hardened and desperate look—which is a far cry from Lea Salonga’s pure ingenue incarnation of the role. Her voice is also clean and crystal-clear, though it can turn quite a bit screechy in the high parts.

Go is impressive in her transformation from a Viva pop singer to Gigi. In her animal-print/military fatigue bikini, black stockings and garter, she cuts a vavavoom figure. This Gigi is so fresh and gorgeous! (Which is kind of questionable, if you ask me—shouldn’t the older Gigi be the coarser, more hardened bar girl?) But other than that, what a powerful voice Go brings to her role!

However, it’s Jon Jon Briones as the Engineer who registers the greatest impact. No wonder it was him who got picked for this revival. He didn’t approach his part as a star vehicle, but created an attack that was entirely his—a sly, smooth criminal with organic humor. His Engineer is sensational. (Another Filipino, Chuck Marbella, understudies the role.)

Kwang Ho Hong, the Korean superstar who plays Thuy, still seems be having difficulty in his role, perhaps because he is more used to pop concerts. But he has star quality, and will hopefully become better as the show progresses.

All in all, this new “Miss Saigon” is a version that will please both old fans and new audiences of the long-running musical. I’m expecting some critics to carp at some of the changes in the staging and lyrics, but overall, most of these revisions make sense. Twenty-five years hence, the heat is still on—“Miss Saigon” remains a singular experience.