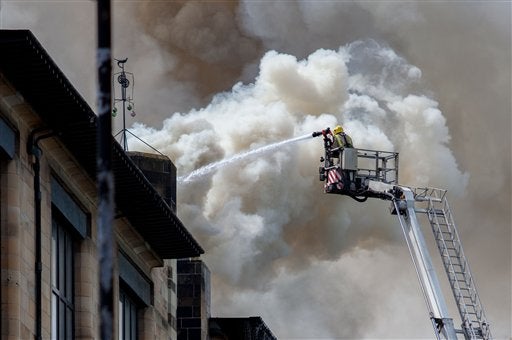 In this photo released by David Barz , firefighters attend a fire at Glasgow School of Art, Glasgow, Scotland, Friday, May 23, 2014. AP

GLASGOW, Scotland — A major fire has devastated the Glasgow School of Art, a landmark in the Scottish city.

The Scottish Fire and Rescue Service said the blaze, which broke out just after noon on Friday, was a “very significant fire.”

Flames flared through the roof and windows of the sandstone Art Nouveau building, designed by architect Charles Rennie Mackintosh and completed in 1909. A 2009 poll by the Royal Institute of British Architects voted it the best British building of the last 175 years.

The school said students and staff were evacuated safely. Many students had been setting up work for an end-of-year degree show.

Snake on a plane! Glasgow airport gets a surprise