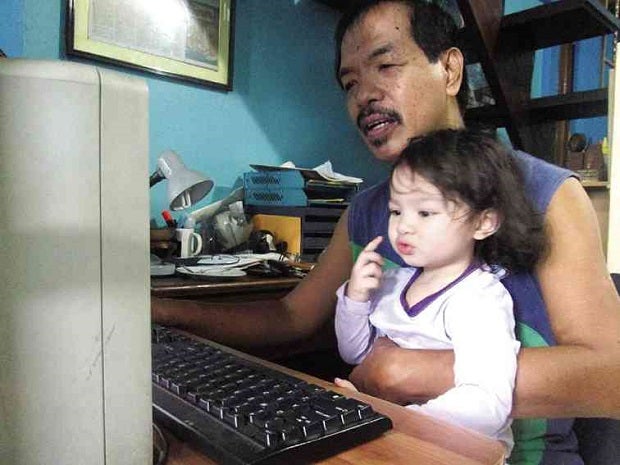 THE author with his granddaughter, Tanya in front of his secondhand computer

Taking in the new technology with neither glee nor gloom

In this age of instant communication, I attract attention every time I attend a presscon with mostly young media people in attendance.

Everyone has an open laptop, and their fingers are in constant motion as the presscon subject expounds on his or her latest controversy during the open forum.

I can see curious eyes staring at my Unicef notebook as though it has no right to be there. I can see what goes on in their minds, and I know what they are saying.

They could be any of the following:

Is he trying to look original at our expense?

As it is, my entertainment editor-seatmate from Bicol is editing articles through his tablet, another one is checking his e-mail and Facebook posts right there on his cell phone, and horror of horrors, the same cell phone doubles as a tape recorder during ambush interviews.

Curious about the cell phone-recorder, I ask a colleague, how do you rewind in that machine?

I get another curious look, but he manages to be polite when he answers, “No, I no longer rewind. That machine can actually virtually transcribe as it records.”

I can already hear what’s going on in his mind, “Torpe. Kailan ka ba ipinanganak?” Or something to this effect.

As it is, my old durable tape recorder still functions on ’80s cassettes. Its most “redeeming” feature is that I can advance or rewind it when transcribing.

At 65, I manage fairly well beating deadlines because I know how to e-mail and I get material from Facebook posts, although I am still asking my grandson what a “poke” is.

And the worst: Elizabeth Ramsey and 200 others invited you to play Candy Crush Saga.

For the likes of me, I don’t even know the traditional dama in the provinces, or chess for the brainy in the city, or the over-familiar mahjong.

I still can’t understand how young people can relax and enjoy hundreds of games online and spend a lot in Internet cafes.

Many times, by just watching them, I want to transform myself into a suicide bomber in an Internet café full of shrieking teenagers yelling noisily with their chosen games.

Their dialogues are just as irritating:

For now, I can safely say I am not totally lost on the busy highway of high-tech communications.

I can e-mail, and writer Amadis Ma. Guerrero can’t. (He pays a neighbor to encode and e-mail stories to PDI).

(My drawback is that I can’t scan, and my grandson does that.)

I heard Nestor Torre still writes his columns on yellow pad (I have not totally outgrown this) and worse, he reportedly refuses to use a cell phone.

When someone asked for Mr. Torre’s contact number, I replied with, “Call the PDI landline. Make it 7 a.m., as he works early, like me.”

Truth is, I work earlier than Mr. Torre.

With a grandson in my custody, I wake up at 2 a.m., meet my deadlines, and by 5 a.m. I am done and ready to cook breakfast for my grade school ward.

Pianists Cecile Licad and Ingrid Sala Santamaria call me at 5 a.m. because they know I am fully awake at that time.

At one time, Licad—at 4 in the morning—said over the phone, “Pablo, are you raising fighting cocks? I can hear roosters vocalizing in the background.”

With my penchant for bucolic settings, I choose places that look like countryside, even in Metro Manila.

My obsession with Old World charm aggravated my distaste for high-tech gadgets.

To my horror, they invaded even the concert halls.

At a Cultural Center of the Philippines (CCP) opening night, I see the old and young alike armed with tablets and new brands of cell phones clicking away at each other before the curtain goes up.

During intermission, I see a high-tech mother helping her son do his assignment on that same tablet.

In another venue, I see a pianist texting a friend, saying the first movement of a Mozart sonata was badly handled by the visiting artist. He is also reporting the audience attendance and describing the attire of the VIP guests.

Gossip has found a big ally in high-tech gadgets and in Facebook.

On FB, someone posted about someone who farted in the first movement of a Rachmaninoff concerto, with a famous family in the audience.

The pianist doesn’t deserve that!, commiserated another.

As you can see, I am taking the new technology with neither glee nor gloom.

For one, it has allowed me to cut on expenses, compared to the days when I would commute weekly to Chino Roces Avenue with my typewritten copies for Lifestyle or Saturday Special.

Reviewing my “journalistic estate,” I am certain my contributor’s largesse will not allow me to smell and see a brand new cell phone, an amazing tablet full of games or a multi-folding laptop.

My motto: Happiness is writing with your heart and soul, and not losing sleep over tablets and iPads beyond your reach.