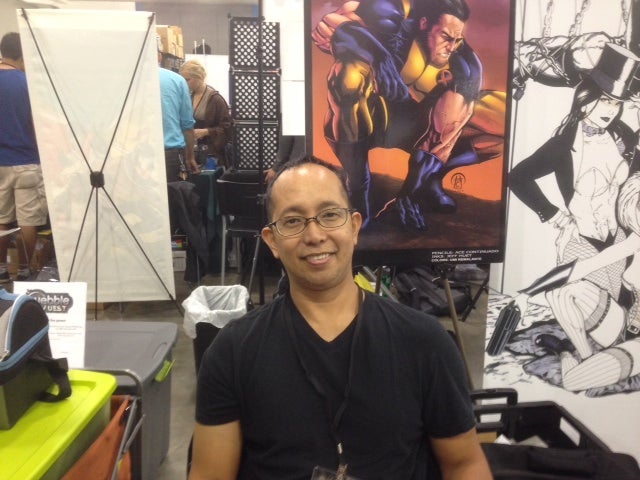 In this year’s Big Wow! Comic Fest recently concluded at the McEnery Convention Center, among the big surprises were: the last of the old school Filipino masters, a practicing professional who finally found fulfillment doing commission work, a born again illustrator who found his second wind drawing robes and sandals instead of masks and capes and a wunderkind with a Spiderman obsession.

Even Portacio acknowledged Alex Nino’s influence on his own work. Now almost 74, Nino is the last of the triumvirate with both deceased Ernie Chan and Tony Zuniga. “Two years ago, we were invited as guests to the big one (the San Diego Comic-con which happens about August every year). Those guys were the first Filipino illustrators to make it here.”

But Comics Editor Dennis Villegas once ranked Nino as one of the top 10 Philippine Illustrators of all time. Third only to Francisco Coching and Nestor Redondo. Nino began drawing in the 1960s with Pablo Gomez, Liwayway and Roces Publications’ Bulaklak. He came to the US in 1974. He started at DC drawing Batman. He also drew Hulk and Conan the Barbarian for Marvel. His peers, all deceased, included editor Julie Schwartz, writer and cartoonist  Joe Orlando and buddy Carmine Infantino (a major influence in comics’ Silver Age from the late 1950s to the late 1960s) who would later join him in animation stints. Big Wow! Is now in its fifth year and Nino was invited in the second year. He has had a booth since then.

Sounding much like the grizzled survivor, Nino told Inquirer.net, “At first you wanted to see how far you can go. Not necessarily compete with the likes of Nestor (Redondo) and Alfredo Alcala. You had to come up with your own style, establish yourself and be mindful you don’t imitate others.”

Nino said he established himself with Conan the Barbarian much like Neal Adams (who also had a booth this year) with Batman. Nino did ink, pencil and even letters. But when Computer Aided Design (CAD) became standard, he “slowed down and went to animation with Disney.” He worked on the original Mulan.

He lamented, “You get good colors with CAD but it’s still better to illustrate by hand. There’s only one software and one processor. There’s no identity (for individual characters).” What’s the difference between Ariel (from The Little Mermaid)and Mulan?

“By hand, you’ll see Adam’s distinct colors. But you can’t stop progress. Even if there’s somebody better than you, at least you know you’ve tried everything and you’ve survived CAD.”

In the beginning, young illustrators like Nino “just wanted recognition (for their work) even without payment. But the longer you stayed in the industry, the more you wanted to earn money to survive. Now the challenge is the new artist who is better equipped. If you continue your old ways, he might improve on you and beat you at your own style. To survive, you must re-invent yourself.”

Nino believes in the superb skills of Filipino illustrators “but we now have competition, especially from third world countries. The PC was the great equalizer.” He mused that in the old days, the artist with the Hispanic last name was probably Filipino but nowadays, you can’t be sure.

He also said you can’t claim work on a superhero as exclusively yours “because there are, like five illustrators, probably working on the same character.”

Nino prefers horror and fantasy as his genre because he prefers curves over straight lines and the two genres leave him latitude to explore his fertile imagination. He would also prefer to work alone on a project than collaborate with, say, a writer.

In semi-retirement, he’s now picky with assignments. There was a stint for a Batman title last year and a graphic novel which has not come out of Chicago yet. He’s experimenting on what he calls “fine arts”, dabbling with oil and acrylic portraits and figure paintings. He came to Big Wow! with two graphic novels he drew for kids: Andie and the Alien by Philip and Brian Philipson and God the Dyslexic Dog.

Far away from his native Tarlac, Nino now lives in Northridge, Reseda, a few miles from LA. Of his five children, the eldest, aged 50, is now in Singapore. The second married a businessman in Hong Kong. The med-tech, the payroll employee in San Diego and the graphic artist are still stateside. “At least there’s one for legacy.”

Danny Bulanadi – now drawing robes and sandals, instead of capes and masks

Danny Bulanadi, 66, began his career illustrating for Marvel’s Micronauts – the characters based on a line of toys. Then, for Captain America, Ironman and the Fantastic Four in the mid-1990s. When things went sideways for Marvel, Bulanadi went to animation first doing lay-outs for Hanna-Barbera. Then there were assignments for Transformers, Johnny Quest and even an advertising stint with Sega for a while.

But two things were going for Bulanadi. The first was meeting Frank Baldevarona, a fellow Micronaut fan and the second was becoming Born again Christian.

Baldevarona also meet with Bulanadi’s mentor, Tony Zuniga, and the friendship began that would also become lucrative. It became profitable when Bulanadi’s treatment of Philippine scenery for missionaries ended up as a 300-page bible comics. Baldevarona also became Bulanadi’s agent.

That was six years ago and about 30 foreign language translations. Now, Kingstone Comics owns the right to print the bible comics. Kingstone prints 12 volumes of what they call the main events in the Bible (like Genesis). Bulanadi’s lush rendering and interpretations make for stunning sequential art. It weaponizes comics so it can target text-only difficulty keeping children and teens from reading and learning.

Since 2006, Bulanadi drew and Baldevarona did production work – scans, clean-ups and transmissions to the publisher. Although capes and tights don’t figure much into their world nowadays, on occasion they would still get commissions like the NTV’s Captain Canada design from Newfoundland. They also need to crank out a few more stuff for Marvel before summer’s out.

Ace Continuado may not have a comic house flagship. But private collectors are drawn to the raw energy of his pencils on blanks (basically, a 14-page comic mock-up with mostly pencil sketches and no letters and minimal inks). Some other illustrator gets the credit for pencils on a superhero. But Continuado pencils that superhero for custom jobs requested by fans and collectors.

These days, Continuado draws a lot of Punisher and Wolverine posed according to his client’s specs. But then, the best use of Continuado’s art would be to pose the Birds of Prey (namely the group of Batgirl, Huntress, Lady Blackhawk, Oracle and other females in tight leather, Spandex or even less) in a way that DC may not print.

Continuado, 40, started in the business in 2008. A talented latecomer, he had to make his mark with the indies like Advent Comics, when opportunities at DC and Marvel were few and far in between. Future projects at Random Planet Comics in between commissions keep him busy.

He may have to kill you if you found out a couple of his secrets. First he graduated from the Philippine Women’s University (don’t you dare laugh) with a degree in Fine Arts. Second, he is a licensed and practicing dentist who hopes that his clinic will open in Manila next year “still my bread and butter.” Meanwhile, the Salinas-based artist also frequents comic cons in New York and San Diego.

Since he was four, Nathan Castillo would go on-line to check out how-to-draw tutorials. Then it was videos.  The grade-schooler’s anatomy and perspective can beat the average teen-ager’s. Now nine years old, Castillo’s rendition of old webhead is so much like a pro’s.

It comes from a lifelong immersion into Peter Parker, Ben Reilly, Superior Spiderman and Venom. “I love Venom and the original Spiderman the most.” Like many kids his age and even half his age, Castillo succumbed to the saga of the often down-on-his luck teen bitten by a radio-active spider, gaining the arachnoid’s proportional strength and abilities.

Castillo also likes Batman, Captain America, Ironman and “anybody else in the Marvel Universe.” He is the eldest with one sister and goes to school in Campbell. This is his second year at Big Wow! and his entreaty that he “wants to work for Marvel.”

His supportive Mom just shakes her head. Right now, his website is all they can do. Unless they make amendments to the Labor Laws just for Nathan.

The two-day comic con also featured Mad magazine illustrator Sergio Aragones, Hellboy illustrator Mike Mignola, other name artists like Jim Cheung, Frank Cho, Terry Moore, Greg Rucka and others.  Also in the mix were the original man in the Godzilla suit Kenpachiro Satsuma and the original man in the Ultraman suit Satoshi Furuya. Famous Monsters of Filmland debuted this year. The Captain America shield prop from the movie, as well as the cars from the movies Back to the Future and Ghost Busters, and the TV series Batman were also resurrected for photo opps. But the flashers, err, flash bulbs erupted for the numerous ladies cosplaying for different comic, TV, movie and anime universes.

‘Man of Steel’ flies into Comic-Con with footage

Pinoy Otaku Festival 2014: Fantasm, First ever event with cosplay for a cause