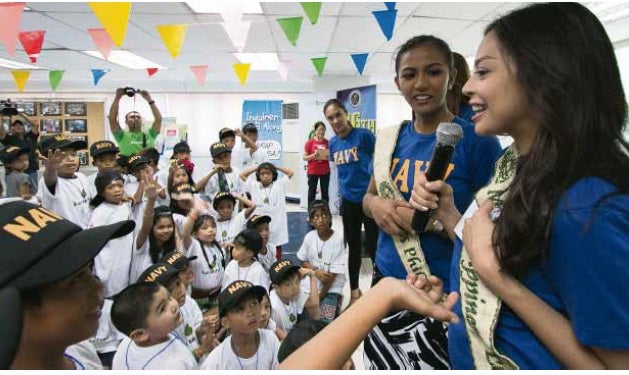 MANILA, Philippines—Close to 100 children were treated to award-winning stories during a special Inquirer Read-Along session on Saturday morning, which featured the launch of “Shorts,” a digital compilation of Junior Inquirer (JI) short stories.

“You read stories to connect with your imagination. You read newspapers to connect with the world,” Inquirer Learning editor Chelo Banal-Formoso, who led in the unveiling of “Shorts,” told the children at the beginning of the program.

Miss Philippines-Earth 2014 winners, frequent Read-Along storyteller Rich Rodriguez and Sophia School principal Ann Abacan engaged the kids with tales of a broccoli spear fighting to stay healthy, a school of fish working together to clean up the ocean, and a toothbrush who lacked an appreciation for his job.

The session also featured the Philippine Navy as a returning partner on the occasion of its 116th anniversary.

All the stories read were winners of the 2003 Junior Inquirer Awards and were transferred to digital format created by MegaMobile, the mobile development unit of the Inquirer Group of Companies.

Rodriguez opened the session with the story “The Worst Job in the World,” written by Andionne Celeste Parlade and illustrated by Jo Ann Bereber-Gando. It is about a toothbrush who hated his job of cleaning a child’s teeth until a new toothbrush arrived and he was relegated to another job cleaning a toilet bowl.

Abacan read the story “That’s All It Takes” written by Shanika Hettige and illustrated by Albert Rodriguez, which tells of a school of fish that took the initiative of cleaning up the ocean by working together to pick up the trash.

“This is a part of our advocacy projects to tie up with organizations that share common goals, specifically on environmental awareness,” said Cmdr. Gregory Fabic, director of the Naval Public Affairs Office.

“The Read-Along is one of the best venues to promote environmental awareness, particularly for kids. In their young minds, we need to instill the value of protecting our environment,” he said.

Covert, a first-time Read-Along storyteller, said she was touched to see the kids participating in their presentation. “Our goal was for the kids to enjoy the story. We hope it sent the message that reading is fun,” she said.

Manuel, who played the villain Count Durian in the story, said they had to be in character to unleash their creative side in interpreting the story.

Querrer said it was important to develop reading habits while young “because you’ll bring that habit with you as you grow old.”

Neil Elpusan, system developer from MegaMobile, said: “MegaMobile was tapped to develop an I-book for this Junior Inquirer short stories compilation. Undoubtedly, Junior Inquirer’s content is excellent, while MegaMobile has the capability to transform this content into digital format. The Inquirer has always been responsive to technological developments and innovation in terms of channels where its content can be made available.”

The kids were treated to snacks by Dunkin Donuts, Healthy Options and PNOWA, and received caps from the Philippine Navy.

The next Read-Along session is on June 14 at the Inquirer main office.—With reports from Marielle Medina, Rafael L. Antonio and Kate Pedroso, Inquirer Research and Celeste Atas, Gabrielle Pantaleon and Fazniyara Lukman, interns