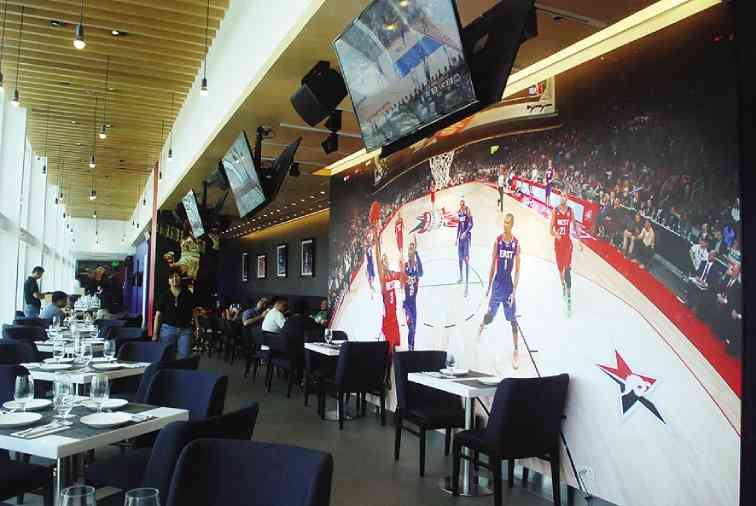 World’s first NBA Café is not just for hoop fans

It will surely satisfy your NBA cravings.

The opening date became a race between NBA Café Manila and that of Madrid, Spain.

“There’s a side story to that. There’s also an NBA Café being built in Madrid,” general manager Nian Liwanag-Rigor said. “It started construction ahead of Manila, but we finished earlier, which is something to be proud of.”

She also recalled that when the restaurant was under construction, she was aware that it would not only be the first in Asia, but first in the world as well.

The interiors were patterned after the league’s first eatery, NBA City in Orlando, Florida. “You will see a lot of larger-than-life NBA images,” said Liwanag-Rigor.

A huge poster-wall of Filipino-American Miami Heat coach Erik Spoelstra welcomes diners. Also notable are the chairs, which have the same texture as a basketball. The maple flooring, meanwhile, is similar to that of a basketball court.

The café likewise has unique memorabilia such as jerseys and basketballs signed by LeBron James and Michael Jordan.

“It carries the name NBA, which makes it official. The brand says it all,” Liwanag-Rigor pointed out.

Will it serve basketball-inspired dishes?

“Basketball-inspired, in a way that the American classics will be there,” she said. “Hotdogs, burgers, fries, steaks, among other things, that will complement your NBA viewing.”

NBA Café Manila, however, caters not only to basketball fans.

“We want to be clear that we don’t just show NBA telecasts here. People might ask, ‘how about during off-season?’ We also make other sports shows available, such as the recent Pacquiao fight,” said Liwanag-Rigor.

Since it’s the first of its kind in the world, Liwanag-Rigor believes the resto will be a default destination for all NBA fans.

“Through this, the café will also help boost local sports tourism in the country,” she said.