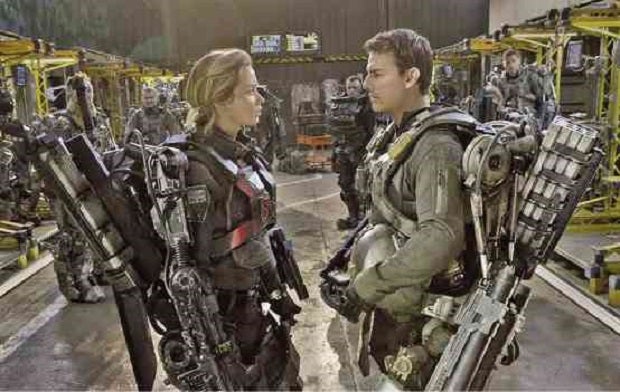 Tom Cruise loves doing science fiction movies. From the smart 2002 “precrime” thriller “Minority Report” to the overwrought 2005 alien invasion “War of the Worlds” and the underrated 2013 clone saga “Oblivion,” the 51-year-old actor and producer has displayed a deep affinity for the genre.

It seems like he’s looking for something unique and specific in every sci-fi film that he stars in. In “Edge of Tomorrow,” he may have found what he’s been looking for.

Based on Japanese author Hiroshi Sakurazaka’s 2004 novel “All You Need is Kill,” the film is a furious, funny and focused war drama that’s been described by many as a “weaponized ‘Groundhog Day.’” The reference to the 1993 Harold Ramis-directed comedy starring Bill Murray is warranted, as that film had Murray living the same day over and over until he did some things right.

In “Edge…,” smarmy public relations officer Major Bill Cage (Cruise) is helplessly killed on the battlefield in a war against the overwhelming alien forces of the spinning, shredding hive-minded Mimics.

But Cage wakes up and finds himself trapped living the same day. Every time he dies, he starts over. “What I’m about to tell you sounds crazy, but you have to listen to me,” Cage tells the troops. “Your very lives depend on it.”

Nobody believes him. Then he meets war hero Rita Vrataski (a steely, sword-wielding Emily Blunt), who says she’s gone through the same thing. Together, they will try to use Cage’s curse to turn the tide of the almost-lost war. “Come find me when you wake up,” she instructs him.

“Edge…” has a fair amount of firepower in its arsenal aside from Cruise and Blunt. The movie’s big gun is director Doug Liman, who brings his big bang-bang sensibility from 2007’s “Mr. & Mrs. Smith” and “The Bourne Identity” to this futuristic battlefield. Even if viewers get familiar with the “extra-life” repetition, “Edge” goes in a different direction by playing it brutally straight as well as for laughs—finding new ways of using that particular twist.

Along with its catchy and accurate tagline, “Live. Die. Repeat,” the movie succeeds with Cruise gamely channeling the spirit of the brass-turned-cannon fodder character of Cage as he adroitly presents what happens when an inexperienced officer is thrown into the fray—he gets better.

Even viewers who dislike Cruise can’t help but be won over by his clever turn. Blunt steals the movie with her bad-ass portrayal of Vrataski. Bill Paxton also has a scenery-chewing bit as the tough drill sergeant.

There are a lot of influences mixed in with the movie’s marching orders (shrapnel from “Aliens” and power burns from “Saving Private Ryan”), but the metal-smashing ExoSuit battles are dynamically lethal, with Cage joining the ragtag J Squad repeatedly in harm’s way.

The visual effects are spectacular, with Liman staging several eye-popping, head-twisting sequences towards the end as the stakes get higher.

Commanded confidently by Liman, “Edge…” takes the gimmick first seen in “Groundhog Day” and then ruthlessly mechanizes and militarizes it—deploying the screen skills of Cruise and Blunt where these would be most effective.

The rousing result is the sleeper hit of the summer, a surprisingly stylish and smart sci-fi-action flick. Your orders: “Live. Die. Repeat”—and watch this.

Warner Bros.’ “Edge of Tomorrow” opens in cinemas on June 5.