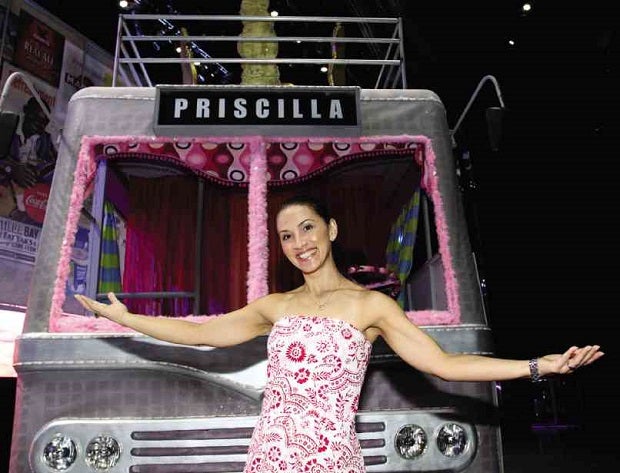 MENCHU Lauchengco-Yulo: For RWM’s “Priscilla,” “We had to come up with everything new, from the costumes to the actual physical bus to the staging.”

With “Priscilla, Queen of the Desert” now on its second-month run at Resorts World Manila, a certified critical and commercial success, Full House co-artistic director Menchu Lauchengco-Yulo can breathe easier.

For Yulo, it is the latest feather in her theatrical cap, albeit with a different color. The thespian, popularly regarded as the first lady of Philippine musical theater and who is now mentoring younger actresses to follow in her footsteps, is running things behind the curtain.

“Priscilla” is the culmination of an intensive, months-long creative collaboration among Yulo and her colleagues in the theater and hotel industries to bring in something new, fresh, but still family-friendly shows to a venue that had drawn in crowds through earlier blockbuster fare such as “The Sound of Music,” “The King and I,” and “Cinderella.”

Yulo started wearing her new hat, along with co-artistic director Michael Williams, in May 2013, exactly a year ago. Full House, RWM’s newly formed theater company, was then starting out, and its production of “Cinderella” had been planned before she had signed on.

The mandate Williams and Yulo got was to do two full-length musicals a year, and “Priscilla” is her first baby.

“It’s a heavyweight of a show,” says Yulo. “We started work on this in September 2013 as soon as ‘Cinderella’ opened. The scale was massive. We were doing pre-production over Christmas.”

What made this particular staging, directed by Jaime del Mundo, different from most local productions was that it was not a template. Many Broadway and West End musicals license the use of their material to foreign theater companies on the condition that the staging in that particular country be done the same way as in the original. In a sense, the creative work consisted of following and implementing the direction that had been executed and seen by millions of other audiences in other parts of the world.

Full House’s contract with the license owners of “Priscilla” was radically different. The Philippine staging had to be original.

“This is a nonreplica contract,” explains Yulo. “We are not allowed to copy anything from the original production, including the bus which was projected on an LED. We had to come up with everything new, from the costumes to the actual physical bus to the staging. We did not want a replica, although that kind of contract was also available. So it’s more challenging; our divas, for one, have more costume changes than the one on Broadway.”

Yulo first saw “Priscilla” in New York in 2009 and instantly thought it would be “fun” to bring to Manila. Five years later, the creative team in Full House aligned with that vision, perhaps seeing in the musical an opportunity to tap into a wider market.

The selection of the material is one of Yulo’s responsibilities as Full House artistic director, and the entire process from conceptualization to the actual launch is a merging of ideas among the theater veterans and the hotel’s board of directors, who would give their inputs on other areas such as marketing or audience sensitivities.

“We have to consider the idea that the market is different from the regular theater market,” says Yulo. “We cater to one that is supportive of our past shows, and build on top of that. But we do want to bring in all types of audiences. We want people to associate Full House with good shows.”

At the same time, the mandate of the dramatic art to “provoke thought” is always present.

“‘Priscilla’ is a good step in that direction,” says Yulo, because “we want theater to change the way people think. And we want to offer fun for them at the same time. The whole musical is about acceptance and tolerance. If everybody will just be tolerant and accepting, the world will be a much better place to live in. You have the audience learning that lesson in a light-hearted manner.”

In conceptualizing shows, Yulo and her creative team also have to consider the scale of RWM’s Newport Performing Arts Theater, which has been designed for huge productions with at least a dozen cast members. Intimate theater or straight plays that have a handful of people discussing the state of the nation may not be a good choice.

Yulo says her dream productions at this stage would include “Sister Act,” “Matilda,” and “Les Miserables.” And, given a choice, she’d probably want to have the same kind of contract as “Priscilla’s.”

“As an artistic director, I would always like to be original. I have no problems doing old material like ‘South Pacific’  or ‘Carousel’ as long as you have something new to say in it. For example, Trevor Nunn took  ‘South Pacific’ and totally redid it. He took away all the cute stuff and brought in all the racism, which is what that show is about.”

“Priscilla” has been set to run for three months, although it can be extended if the audience demand is there.

Professionally, Yulo is also looking at her new role for the long term.

“I like everything about it,” she says. “Sitting at the table and deciding what we are going to do, setting all the production meetings, seeing it on paper and watching the whole thing come alive on stage … You go through headaches and sleepless nights—and you see that it’s doable. Things slowly come together and it’s amazing.”