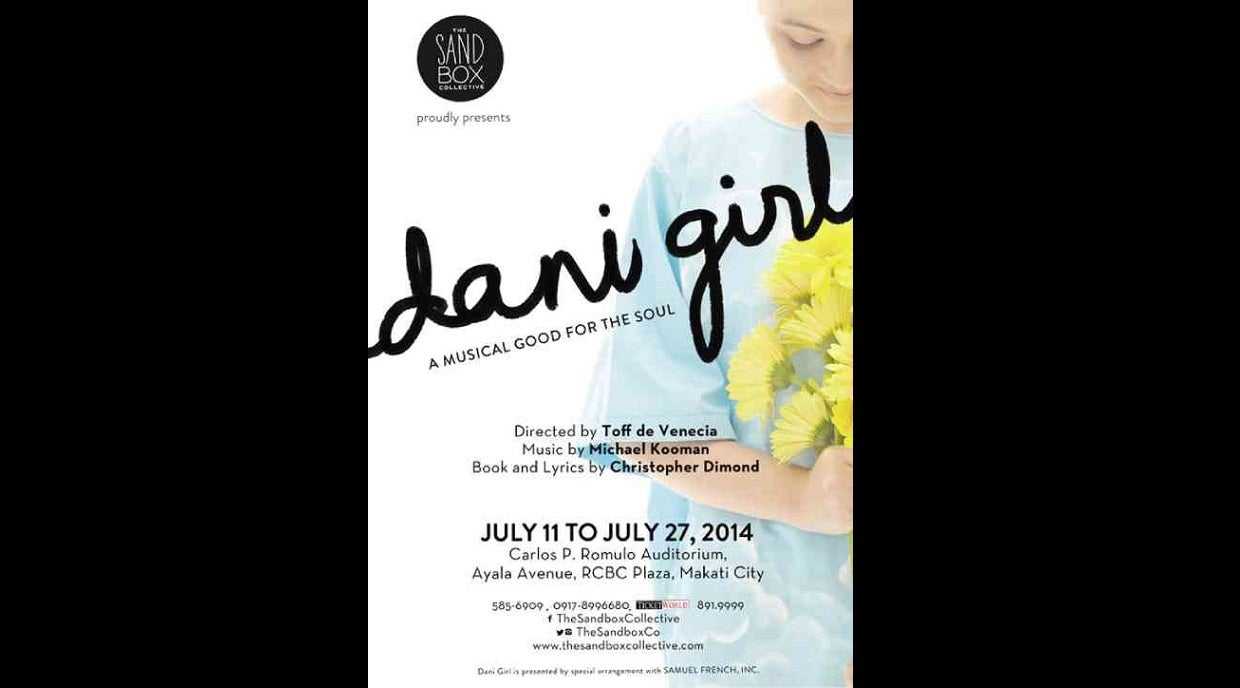 There’s a new kid on the theater block—The Sandbox Collective, a subsidiary arm of the theater company 9 Works Theatrical. And it will make its debut with “Dani Girl,” an Off-Broadway musical by young American composers Michael Kooman and Christopher Dimond.

The choice of a dark, probing, tearjerking but inspiring musical about a nine-year-old girl with leukemia provides an idea of the thrust that the Sandbox Collective wants to pursue.

Actor-director Toff de Venecia, who heads the venture along with Anna Santamaria, said Sandbox will aim for “edgier, maybe sexier shows,” those aimed at younger audiences (older viewers are welcome, too, of course).

“Dani Girl” has played Off-Broadway and at “fringe” theater festivals and regional theaters in the US, Canada and Australia. It has reaped highly favorable notices and will now have its Asian (Manila) premiere.

A critic wrote that “many of the tunes are melodic and hummable, something missing in too many new musicals.” This was proven to be true during the recent launch of the Sandbox Collective at LRI Plaza, Makati City, with excerpts performed by cast members as well as shown in video scenes.

While in New York, De Venecia recounted, he was “browsing” through the synopses of some 200 musicals when he was struck by the resemblance of the title of one show to the standard song “Danny Boy.” And “when I read the story, I said to myself, this is our show.”

“Dani Girl” is the story of nine-year old Dani Lyons (to be played by teen actress Rebecca Coates) who is afflicted with leukemia. Instead of surrendering to despair, Dani goes on an imaginary journey in search of her lost hair (she wears a bandana) and answers to her terminal condition.

She is accompanied by an imaginary guardian angel (Lorenz Martinez alternating with Red Atadero), who is “sometimes caring, sometimes sarcastic.” Her religious mother is played by Sheila Valderrama (alternating with Pamela Imperial). Young Luigi Quesada is Marty, Dani’s roommate in the pediatric oncology ward.

“We have been researching a great deal to help us understand (cancer patients),” said Atadero. “Research will be our best weapon.”

Valderrama added: “We have visited Child House and other institutions that deal directly with cancer to understand what the disease is, and what it does to families.”

“It is a blessing for us, an opportunity to open our eyes to what some are going through. We want to respect the material so much,” said Imperial.

“Dani Girl” is edgy and smart-ass in the way of new musicals, but it apparently will also tug at the heartstrings.

“Bring out the Kleenex,” urged Imperial.

This musical is the opening salvo in an ambitious program that the Sandbox Collective has set for itself, which includes pre- and post-show discussions, a multi-arts festival, and an original play set for next year. This does not include the traditional big musical by the mother company, 9 Works Theatrical, at year’s end.