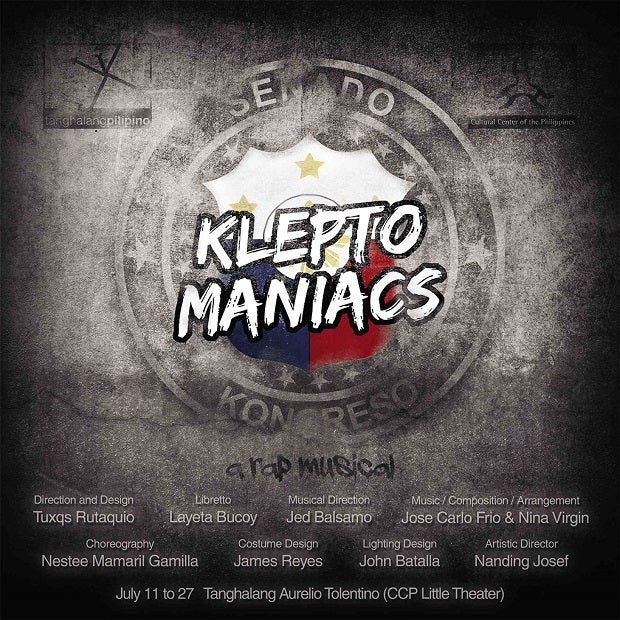 The stench of the Janet Lim-Napoles pork barrel scandal has reached the theater circle, and it has galvanized playwright  Layeta Bucoy to write the libretto of a rap-musical called “Kleptomaniacs,” running at the CCP Little Theater from July 11 to 27.

Tanghalang Pilipino is no stranger to plays reflecting the best and the worst in Philippine society.

Corruption among civil servants was the stuff of Malou Jacob’s “Anatomiya ng Korupsiyon,” which has enjoyed repeat performances since it opened in 1992. It was later made into an independent film by Dennis Marasigan.

An earlier Jacob play, “Juan Tamban” (1978), was also hailed by the late author and critic Doreen Fernandez as “a landmark in Philippine modern theatre, because of its well-researched and realistic portrayal of contemporary social problems and its combination of both realism and nonrealistic styles.” It won the National Book Award for Drama in 1984.

Like a plague that refuses to die down, the subject of corruption in the Philippine political system was reexamined in TP’s production of Bucoy’s “Walang Kukurap” two years ago. A well-performed play, the theater piece mirrored what was repulsive about traditional politicians and the extent to which they would go to achieve their twisted ends.

“The word ‘kleptomaniacs’ just popped out of my mind as I followed with disgust the Napoles teleserye and the characters in her story, which have doubled in number as her storyline has turned into epic proportions. With the number of participants and ‘actors’ we now have in this unending saga of graft and corruption in government, we just realized that the word ‘kleptomaniacs’ is in the very air we breathe.”

Josef has a ringside view of corruption when his whistleblower-friend Jun Lozada took center stage in the Senate hearing that was looking into the notorious NBN-ZTE scandal during the term of former President Gloria Macapagal-Arroyo.

Josef’s shock over the extent of governmental corruption and the slow grind of justice to address it prompted him to resign as vice president of the publicly-funded CCP and to go back to theater.

“Jun (Lozada) shared with me what he knew about the shameless corruption under the Arroyo administration,” recalls Josef. “I learned about the mind-boggling, chronic corruption and shameless siphoning of people’s money by many [whom] we call public servants. From that time on, and now with the Napoles scandal, I am personally convinced that our country has many kleptomaniacs as leaders. After the release of the final Napoles list, we are left with only a handful of good men and women in government service.”

Bucoy admits it took her several months to conceptualize the rap-musical, even as it was already under discussion late last year.

“There was even an almost all-nighter with me, our director Tuxqs Rutaquio and our dramaturg Katrina Stuart Santiago to brainstorm on the concept. At first, it was difficult for us to imagine a rap-through musical. We toyed with several concepts—stories ranging from a contemporary ‘Noli Me Tangere’ to sci-fi. We agreed finally that it has to be Pinoy rap, and that the dramatic situation be presented in a rap battle or fliptop. What we couldn’t imagine at that time was how to sustain a story for some two hours on stage that would encompass an emotional journey, but delivered through rap.”

As a playwright, Bucoy says her concerns were even more basic: “It was almost always about characterization, getting inside a character, understanding a character without biases or judgment, then placing that character in a situation which I always hope would give rise to an insight about human nature.”

The final version of the theater piece they came up with is a highly collaborative work.

“We couldn’t have jump-started this without the guidance of Tata Nanding (Josef),” says Bucoy. “This production also owes much to the generosity of Roselle Pineda who gave us an overview about rap and its types, especially in the Filipino context. Gloc-9 and Q-York also held rap and hip-hop workshops. To have Gloc-9 listen and comment on the few songs created for ‘Kleptomaniacs’ was already such a big thrill for us, and definitely inspiring.”

Josef says the new rap-musical is in good hands with Bucoy doing the libretto. “Layeta is a playwright with incisive literary skills and a deep understanding of social ills,” he notes. “The play may yet yield antidotes to our seemingly incurable affliction of the human soul and spirit.”

He refers to Rutaquio, meanwhile, as a young genius of a theater director. Rutaquio has collaborated with Bucoy on a number of plays that have gained wide critical and audience recognition, among them two of the most memorable entries in the Virgin Labfest, an annual festival of new plays at the CCP: “Ellas Inocentes” (2007) and “Doc Resurreccion, Gagamutin ang Bayan” (2010). Rutaquio is also TP’s associate artistic director.

“Rutaquio, along with the rest of the artistic team and the gifted young actors of Philippine theater, will make this theater piece worthy of opening TP’s 28th theater season,” says Josef.

“This is my first rap-through musical. As usual, nothing can pacify the butterflies in my stomach. I always drown in the question of whether or not the show gives justice to the material. Is it sincere? Are the intentions clearly fulfilled?

“What my playwriting teacher Nicolas Pichay said in our class always haunts me: ‘You have to care for your audience. They paid to watch your play, they dressed up, traveled, and allotted several hours of their life for your play traveling to and from the venue, sitting for the duration of the play, discussing the play before and after the performance, etc. You have to make those hours worthwhile, meaningful, for they could have just done other things with their time.’

“And I am haunted, too, by what National Artist Bienvenido Lumbera said once: ‘You have to care for what you write.’”

Rutaquio puts in his two cents: “‘Kleptomaniacs’ is for all Filipino citizens who would like to be part of a creative analysis of the never-ending culture of corruption, greed and dishonesty that ails our country. By using the medium of hip-hop music, we would like to appeal to the Filipino youth and the young-at-heart. The message may be heavy and disconcerting, but they will also enjoy listening to the music. They will surely get the message, which will be sung in a rhythm and tempo that is young and contagious, even ‘spiritual.’ The play will tell us that it’s not too late to call for change and social transformation.”