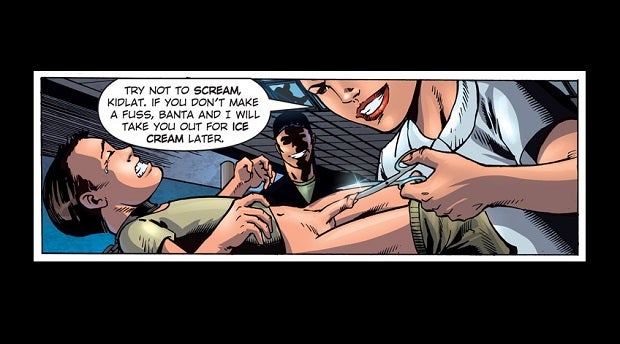 Screengrab of the comics “Foreskin Man” shows an “Operation Tuli” in the Philippines led by villainous nurses and thugs. Screengrab from ForeskinMan.com

MANILA, Philippines – The long and short of it is – circumcision is an illegal act.

This is the message of a comics-based magazine in California, which is bidding to make circumcision illegal.

“Foreskin Man” is a story against circumcision, particularly in the Philippines where the very act is widely believed to be a boy’s rite of passage to manhood.

The story was created as a campaign by the movement MGMbill.org, which is lobbying for the passage of the Genital Mutilation Prohibition Act in the US Congress.

The bill seeks to protect boys from genital mutilation, the group said on its website.

The latest installment of the comics is entitled “Operation Tuli,” apparently based on a Filipino practice of the same name.

In a press release posted on PRWEB.com, the group’s president and the comic’s writer Matthew Heiss said he based the story on the Philippine Department of Health’s project usually during the summer for Filipino boys who undergo circumcision.

“’Operation Tuli’ is state sponsored assault against children… It’s an annual tradition where boys as young as five years old are forcefully taken by their parents to government funded facilities to have their genitals mutilated en masse,” Heiss said in the release.

“Promoters of this practice claim that ‘tuli’ turns boys into men, but in reality, all it does is steal their innocence and leave them disfigured for life,” Heiss added.

According to the group, circumcised men “suffer the same psychological effects found in rape victims”.

“A sense of great loss and feelings of anger, distrust, and grief are common among circumcised men who are aware of the functions that the foreskin performs. Problems with intimacy in adult life, long term post-traumatic stress disorder, and feelings of personal powerlessness are also reported by men when discussing their circumcisions,” the group said.

“Foreskin Man” tells the story of scientist Miles Hastwick, who heads the Museum of Genital Integrity in San Diego. He also turns secretly to superhero Foreskin Man, who, according to the comic’s website, “rescues innocent boys from the clutches of the world’s cleverest and most dangerous circumcisers.”

The protagonist Filipina Malaya Luansing, who works for Hastwick as a sculptress in the museum, goes to the Philippines to visit her sister Jovelyn. She had just come from organizing an exhibit of her sculptures depicting Filipino circumcision.

Jovelyn apparently turns out to be a psychotic nurse leading a massive operation in Tondo. Among those to be operated is Malaya’s nephew and Jovelyn’s son Kidlat, who dreads the operation.

In the story, Filipino boys are locked up in cages with the circumcisers depicted as thugs and sneering nurses.

Mr. Foreskin busts the operation, saving Kidlat, the other boys and their foreskins.

Malaya rescues Kidlat from his mother and brings him to Boracay Island where Jovelyn’s ex-husband and Kidlat’s father Nimuel lives.

Malaya is then surprised by Hastwick who was waiting for her outside, inviting her for a ride in the Filipino’s traditional mode of transportation – the tricycle.

And that’s how Mr. Foreskin saves the day – and the boys’ foreskins.