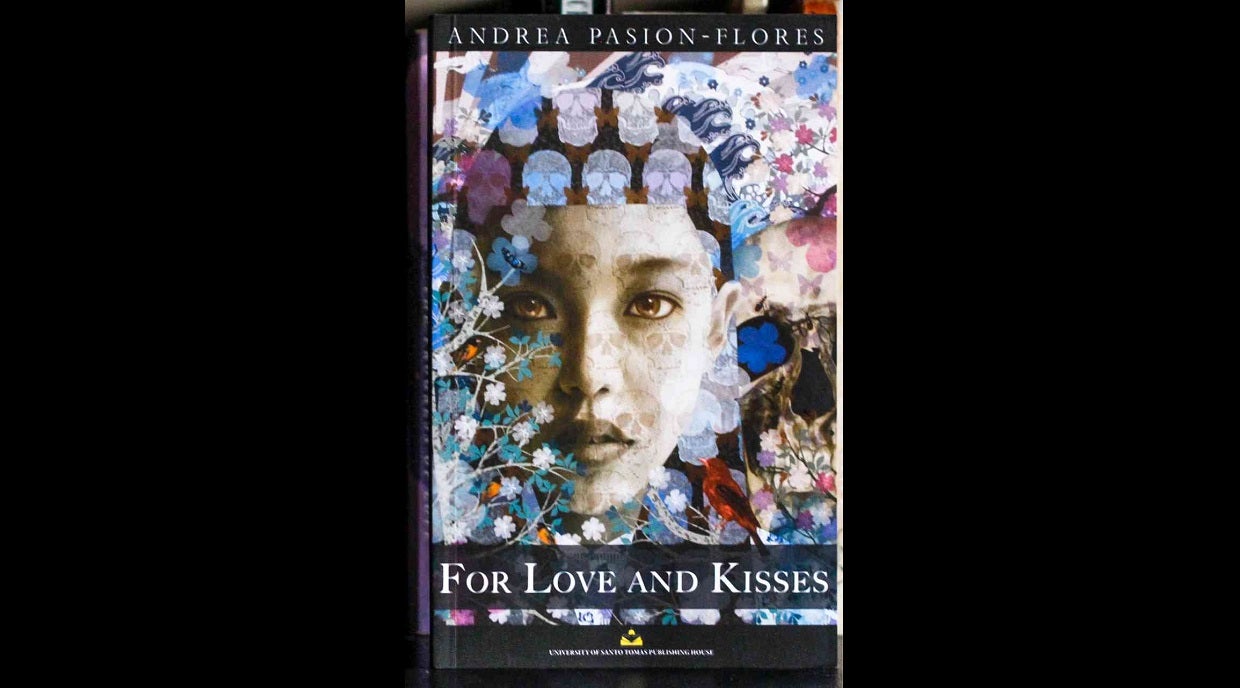 Growing up surrounded by books, Andrea Pasion-Flores seemed destined to work with books. What was perhaps unexpected was just how deeply involved she was going to be in the field. The award-winning fictionist and currently the only Filipino literary agent has been making literature as well as representing it.

Though she grew up with books, Maria Andrea Pasion-Flores, 43—the eldest of four children born to businessman Froilan Pasion and wife Emerita—had limited reading fare when she was young.

“My parents only allowed me to read Bible stories, Disney stories and the encyclopedia,” she recalls. On her own, she began reading Doris Lessing and found herself writing for her grade school paper. “One of my teachers singled out a composition I wrote about my Mickey Mouse watch,” she recounts.

A BA Journalism from the University of the Philippines Diliman only led her to more writing—this time, mostly short stories “because I wanted to do more than what I was doing for the (Philippine) Collegian and the newspapers.”

Pasion-Flores’ short stories would go on to be published and anthologized while earning her literary awards from the Philippine Graphic and the Philippines Free Press.

The alumna of the UP and Dumaguete National Writers Workshops later served as managing editor at Cosmopolitan Philippines and then associate editor at Good Housekeeping.  While at it, she also managed to publish a best-selling chick lit novel, 2004’s “Have Baby Will Date.”

When she took her masters degree in creative writing at UP, Pasion-Flores finally discovered Filipino writers. “That makes me sad, because I feel that if I had been introduced to them earlier, I would have been writing much differently.” Among her favorites were Gilda Cordero-Fernando, Cristina Pantoja Hidalgo and Kerima Polotan-Tuvera.

She also wrote a lot of stories during this period. “It was wonderful, I would sit down and write in a white heat. I’d start in the morning and finish at night.” She considers teachers such as Hidalgo, Jose Y. Dalisay Gémino H. Abad and the late NVM Gonzalez to be major writing influences.

After finishing her masters in 1998, she took up law at UP and passed the bar in 2003. “I think that I’m wired differently because I’ve always wanted to help people,” she says. “I thought that law was the way to go.”

Working in an Ortigas law firm however gave her second thoughts. “I wasn’t happy there because all I was doing was firing people, breaking up marriages and handling the wrong cases. I was not for The People.  A lot of people who are wired that way enjoy it, but it’s not for me.”

She went back to books and applied for and was appointed Executive Director of the National Book Development Board (NBDB) where, for six years, she helped local authors, publishers and readers with her leadership and creativity.

When describing her time at the NBDB, Pasion-Flores quotes Charles Dickens: “It was the best of times, it was the worst of times. I wouldn’t exchange it for anything (because) I really learned a lot.”

In 2010, she sought out and met Jayapriya Vasudevan, founder and managing partner of the literary agency [email protected] LLP in Singapore. They got along very well, she recalls.

“She has the patience I don’t have,” Pasion-Flores says, adding that she constantly joked about joining Jacaranda. Watching what the literary agents were doing at the Jaipur Literary Festival had left her floored. “It was fantastic,” she said. “My God, this is what I want to do.”

Originally founded in India in 1997, Jacaranda now operates out of Singapore and has represented some 60 authors. Vasudevan herself operated out of Nairobi, Kenya.

In 2013, Pasion-Flores was hired as the agency’s fourth agent, all of them women working out of four countries.  “We tend to work with people like us, in this crazy and utterly lovely industry,” Vasudevan says. “Andrea is extremely well read and given her literary background with the Book Development Board and her love of reading, she seemed the perfect fit when Jacaranda looked to expand into The Philippines. Andrea’s love of reading, her commitment to the world of books, the fact that she is also a lawyer, all underlined with her wonderful people skills, makes her the perfect colleague.”

But what exactly does a literary agent do? “You come between two people, and you sell something. And in this case I am selling fiction or non-fiction works. I scout, I try to look for the talent or the work to sell. Technically, what I am doing is building a list of stories that I want to sell. I identify publishers around the world who would be interested in those,” says Vasudevan.

The idea is that Jacaranda can get the authors good deals, from which the agents receive a commission while Jacaranda gets the world English rights. If the book sells, the author gets an advance, hopefully US$5,000 plus the royalty, which varies although traditionally, the more printings a book goes through, the higher the royalty becomes. Each different language market adds more money.

There have been many people working as business managers or author’s representatives in the Philippines, but Pasion-Flores is the only one working full-time for an international agency. While she operates out of Manila, she handles books from around the world. “Two weeks into the job, I stopped looking at citizenship. It’s whether I like the story or not.”  Jacaranda got so many submissions that once, their website crashed.

Personally, Pasion-Flores is looking to bring Filipino authors to the world. “I am open to Pinoys because I am Pinoy and most naturally gravitate towards the Pinoy story. I’d like to sell a Filipino book. That’s the reason I got into this business in the first place.”

But she’s also looking at any Asian talent who could make it big. She’s still preparing for the Frankfurt Book Fair in October with her still-developing list.

But already, she has landed one big deal with F.H. Batacan’s masterful whodunit “Smaller and Smaller Circles,” which has been expanded and been bought by New York-based Soho Crime.

Pasion-Flores hopes it will be published next year. “It’s a fantastic revise,” she says, adding that she is also pushing the revised version of Criselda Yabes’ “Below The Crying Mountain.”   There are other Filipino authors in the pipeline and she is looking for more.

So far, the only Filipino writers translated into multiple languages are José Rizal and National Artist for Literature F. Sionil José. Several Filipino writers have also been been published by international publishers, among them Man Asia Literary Prize-winner Miguel Syjuco (“Ilustrado”), Samantha Sotto (“Before Ever After”) and Marivi Soliven (“The Mango Bride”), all of whom, Pasion-Flores notes, are already represented by literary agents. She now intends to find the next ones.

Filipino stories hold much promise, says Vasudevan. “The future for writing from your country is bright because of the myriad voices and styles, and an old, old culture. The relationships with China and America will also bring us some great stories. It’s all about good stories and good writing.”

Current Filipino novels, she notes, need to undergo some changes to be acceptable to international publishers. Sometimes the editing needs to be done for a particular market, and I think the Filipino writers need to be less touchy about their work being touched. I must also be able to work with the writer. For an editor to pick up your book, they must love it, Vasudevan notes.

She also observes that books by Filipinos need to be translated into different languages and that novels need to be much longer. She understands that Philippine publishers are wary of what she represents, but insists it’s a brave new world for Filipino writers and publishers alike.

Pasion-Flores is currently the only Filipino agent working with a literary agency but she is not the first one. Anvil Publishing’s Karina Bolasco recalls meeting a successful Filipino agent named Janet Cadsawan at the Frankfurt Book Fair in the 1980s, but she eventually left Germany for the United States and she is now a successful jewelry designer.

What Pasion-Flores intends to do won’t be easy, says Bolasco. “The biggest challenge is still that the Philippines hardly figures in world consciousness. Manny Pacquiao, our beauty queens, our indie films, our disasters, once in a while put us on the international radar. But our fiction and writers may take longer.”

Bolasco believes Pasion-Flores will eventually professionalize the trade. “It is an idea whose turn it is to bloom, maybe in time for the ASEAN economic community, or maybe because the globe has really shrunk and any place is literally at the tip of our fingers.”

Pasion-Flores certainly knows how to keep herself busy away from being an agent. Earlier this year, she had her short story collection, “For Love and Kisses,” published by the University of Santo Tomas Publishing House. Containing stories that come from different points in Pasion-Flores’ writing life, it is “a fine collection” according to Cristina Pantoja Hidalgo in the book’s introduction.

When she’s not busy tending the home fires with husband Javier Flores, a lawyer, and their three children aged 10 and a set of twins aged 3, Pasion-Flores teaches freshmen and sophomores at UP Diliman’s Department of English and Comparative Literature.   She’s also reading a lot of submissions, aside from stuff from such authors as Jhumpa Lahiri, Yiyun Li, Mashin Hamid, Zadie Smith and Junot Diaz.

Ever vigilant and hopeful, she’s casting a wide net in search of the next big Filipino novel, ripe and ready for a world of unsuspecting readers. That’s what drives her through the many manuscripts and long evenings of reading.

“I’m obviously not doing this for the money, because if I am, I’d just go back to lawyering. But I do feel that it’s about time the world reads Filipinos, and I do know they want to read books in a certain manner,” says Andrea Pasion-Flores. “So there must be a place where they both meet. It’s not enough that people read the big literary winners; there’s more stuff out there. I do feel the world is missing out on it.” •

I have a list in my head for commercial fiction and another for nonfiction,” she says.

Here is her “not definitive, ever changing, ever growing” list of 14 authors and books she would love to represent for agency [email protected] LLP:

2. Jose Y. Dalisay (he has an agent, but I keep asking anyway)

3. Sarge Lacuesta (yes, he does short stories but I bet there are a few novels in him)

5. Elena Paulma (though she doesn’t know this yet and she doesn’t have a book yet; her short stories are just fantastic. I’m sure she will work on a novel someday)

8. Anyone who will competently write Manny Pacquiao’s story—and Pacquiao’s women (Dionisia and Jinky, who else?)!

10. A war story—I have a war hero in mind, actually. I’d think of something historical, but a bit off the beaten track.

11. A humorous novel—whoever’s writing one

13. Essays from a sassy, young voice

14. A big, sad martial law novel (something a Pete Lacaba would write if he wanted to do a novel)