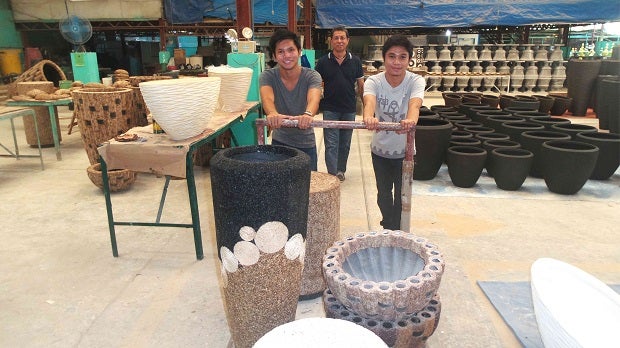 HANDS-ON: Pete Delantar (center) has exposed his sons Carlo and John to the rigors of the family business. Photo by Carissa Villacorta

From green and gullible to world-class greentrepreneurs

Tired of being corporate stiffs, Pete and Cathy Delantar started their own business in the 1990s, using a cheap and accessible material they had developed from local sources.

But being green and naïve in the business, the couple soon found that a competitor had appropriated their invention and claimed it as his own.  Without the intellectual right to their product, the Delantars soon found themselves deep in debt and in desperate straits.

Undeterred, they decided to start anew, this time by doing business in an abandoned warehouse where they found heaps of twigs and shrub cuttings that they were loathe to treat as trash.

What they did with such disposables turned their life around. It also turned them into greentrepreneurs, business innovators with an eye not just on profit, but on the environment as well.

For four years, Pete Delantar worked as operations manager, while Cathy toiled for six years as materials management manager in the manufacturing and export industry, until they decided to become their own boss.

“We decided to start a business because we’re entrepreneurs by heart and we thought we could make a difference,” Pete said.

From the one-car garage of their apartment on Highway 77 in Cebu streamed out rattan furniture which were popular at that time.  But the Delantars caught the tail-end of the rattan export boom and found stiff competition.  They needed to adapt to the changing times.

Although he was new in the field, Pete Delantar knew that one way to make business cost-effective was to source raw materials locally. Limestone in Cebu was cheap and accessible, and with research and imagination, he and wife Cathy developed Stonecast, a material that looked like solid and heavy stone but was in fact lightweight.

With a starting capital of P30,000, the couple bought a compressor and a pick-up truck for their new business.  To their dismay, they found that a competitor with more resources had copied their stonecast technology and claimed it as his own.  All they had left were unpaid shipments and a dearth of customers.

“It was a difficult time for us, especially since we were both starting a business and starting a family. My wife and I knew we just had to rise again,” recalled Pete.

While still recovering from these unfortunate events, the couple was asked to bid on a warehouse in the town of Compostela, a third-class municipality north of Cebu City. The warehouse was in the middle of an abandoned industrial zone, with hardly any source of water and electricity and only a few households around.

It was a risky move, but the Delantars thought they had nothing much to lose and took it.

While they were cleaning up the warehouse, they found in their trash heap a pile of twigs and shrub cuttings which Cathy was loathe to burn, as it would be bad for the environment. Was there a way to recycle or repurpose these materials? she asked herself.

“It was the best decision we ever made,” she recounted. “We could have easily disposed of those scraps, but Pete and I, we’re always up for challenges. We both have traders for ancestors, and though we’re trained in the corporate setting, Pete is adventurous while I’m a bit nerdy. So we just embraced that moment when we realized that we wanted to recycle these disposable materials.”

After five years of research and prototyping, the Delantars’ company, Nature’s Legacy (NL) launched in 2004 in an expo in Germany a lightweight material made of botanical scraps like twigs, leaves and seeds that they called Naturescast®. With the use of a proprietary binding substance, the material can be shaped or sculpted into practically anything.

Having learned their lesson from their Stonecast experience, the couple made sure to apply for local and international patents for Naturescast.

The innovative material quickly caught the attention of the Sustainable Furniture Council (SFC), a US-based non-profit coalition of industry players that promotes sustainable practices among manufacturers, retailers, and consumers. Delantar became the first and only Filipino invited to be a founding member of SFC in 2007.

The following year, the company’s iconic chair made of mango seeds and forest waste called Club Chair was used at the celebrity lounge of the 50th Grammy Awards. The Club Chair’s retro appeal harks back to the trendy ’60s high arm chair.

Since that global exposure, Nature’s Legacy has become a proud Filipino brand of world-class furniture and furnishings that also exports home accessories to 41 countries, and fashion accessories under the brand Floreia to 28 countries.

Floreia was coined from the names of the couple’s mothers, Florencia and Victoria.

On a regular week, NL ships their products for export in four containers, each carrying 400 to 700 units.  The products are available at high-end home stores in the US and Europe, among them West Elm, Pottery Barn and Neiman Marcus. Locally they are available made to order, although some pieces can be found at Rustan’s and Echostore.

Despite global recognition, Delantar is prouder of how the company has developed a business model that, in his words, “affects people’s lives for the long haul.”

The use of locally-sourced raw materials ensures business sustainability, but sustaining the community around also matters to the Delantar couple who made sure that their employees are provided subsidized housing.

Of the seven hectares of land in Compostela that the company owns, a little over one hectare has been converted into a family park and mini-forest,  while another hectare hosts two phases of 40-door apartments. Each subsidized home, rented out to employees for P380 to P500 a month, has a floor area of 40sqm to 60sqm.

With employees within walking distance from their place of work, their carbon footprint is reduced and so is the stress level of commuting daily to and from work.  Productivity is thus enhanced, Delantar pointed out.

The long-term effect is apparent in the company’s employee retention rate of five years on average. A significant number of employees has been with NL for at least 10 years.

Manuel Mendoza, who was with the company for over 20 years, rose from the ranks—from associate or worker at the warehouse to production head, and has sent all his children to college with his earnings.

The children of some NL associates are also invited to apply for jobs or to be interns in the company who are given paid summer jobs while being immersed in company culture.

It’s a business exposure that the Delantar children enjoy as well, as in the case of their second child, Carlo, 22, who now manages the fashion and accessory line Floreia.

Initially a CSR (corporate social responsibility) initiative, Floreia attracted attention for providing livelihood to over 10 rural communities in Cebu and for its clever use of Naturescast and Nucast® (similar to Naturescast but made of scrap paper). Paper beads are mixed with botanical scraps and transformed into trendy and classic eco-friendly accessories.

In recognition of its unique and creative eco-friendly designs, Floreia won a Special Citation for Eco-Design at the Katha Awards 2014 at Manila FAME in March 2014.

Though some people have expressed curiosity on why he had chosen a female-dominated and-targeted business, the younger Delantar is clear-headed about the objectives of the brand.

“It took me just one trip to the villages in Carcar (in Cebu) to say yes to taking on Floreia. My mom’s from Carcar, and to be an instrument to give back to people of her hometown is such a privilege for me,” he said.

Carlo also believes that more than just providing livelihood, NL’s innovations have close to limitless applications. “We continue to innovate and find new applications for Naturescast and Nucast because we haven’t reached the product’s full potential yet,” he said.

He added: “With such a versatile, and sustainable material, we can have different uses for various industries such as architecture, engineering and art. We can keep reinventing and repurposing these materials while taking care of our people.”

The family business is rapidly expanding, with other Delantar children joining the company.

Peter Michael, 28, a multi-disciplinary major in marketing, and engineering student John Dayle, 21, are expected to specialize in sustainable construction and design.

Meanwhile, Maria Katrina, 19, who just got back from studying fashion jewellery design at the Instituto de Europa Design MODA in Milan, Italy, is being groomed to be NL’s in-house design guru.

“I think family succession is important so this kind of business makes it long term, for the industry and for the communities it serves,” said Carlo.

Pete and Cathy said that their kids do not need much convincing to be part of Nature’s Legacy.  “They have seen how and why we, their parents, are doing what we do,” said their father.

“I also know that even when they follow their own path, they will always find a way to pay it forward, whether through our business or through other opportunities,” he added. •