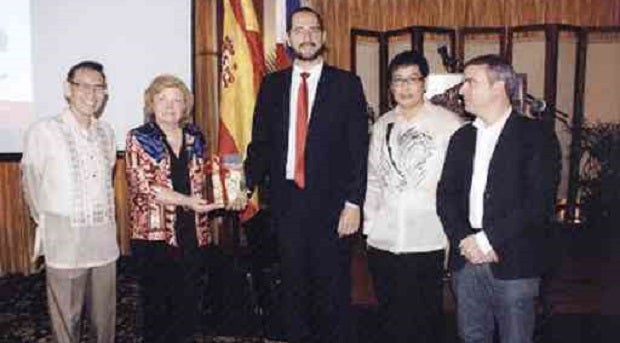 A masterpiece comparable to Rizal’s novels lives on

The book was launched last year at the Ayala Museum by Georgina Padilla y Zobel de Mac-Crohon. Georgina flew to Cebu for this occasion.

In 1929, his novel won first prize of the Premio Zobel—the oldest and very prestigious literary recognition given in the Philippines.

“La Oveja de Nathan” covers the early years of the American occupation in the Philippines from the 1910s to the 1920s and is considered worthy of comparison to Rizal’s novels for its portrayal of mores and manners during that particular time.

Long out of print, Georgina retrieved it for the younger generation of readers.

Published in both Spanish and English, it has been translated by Lourdes Brillantes, a dedicated Hispanist and herself a 1998 Premio Zobel recipient.

A hundred copies brought in by Vibal’s sales team were sold long before the event ended.

Present among the writer’s kin were his children—son Gemino and his wife Mercedes with their sons David and Diego; Antonio and Marina Abad; Edmundo and Fides Abad; as well as their cousins Onker Abad Pido, Victoria Abad Bugarin, Carlota (nee Abad) and Kenneth Pimentel; Msgr. Roland Jimenez and lawyer and Mrs. Teodoro Almase.

Amparito delivered the welcome remarks while Gemino or “Jimmy” spoke about his father.

Shortly before his death, Abad was working on a multilingual dictionary of several Philippine languages with Spanish and English.

Carlos Madrid, in eloquent Spanish, stressed the importance of publishing gems of Philippine literature in Spanish.

Georgina is in search of another Abad masterpiece, “El Ultimo Romantico” which also won the Premio Zobel a year earlier.

Also out of print, she hopes a copy would be found somewhere.

She plans to publish next “La Carrera de Candida” (Candida’s Career), a collection of short stories, poems and essays by Guillermo Gomez Windham that bagged the first Premio Zobel in 1922.

Publisher Vibal later took the mic and introduced in eloquent Spanish an updated video presentation about the Zobel family and the literary prize that proudly bears their name.

The continuity of Premio Zobel now lies in the hands of Georgina who is inspired by her mother Gloria Zobel de Padilla’s words that “never shall the Spanish language die in the Philippines.”

Lilia is the daughter of Fernando Hernandez, another Premio Zobel recipient who won in 1927 with J. Hernandez Gavira.

Treasurer Julina Pando Muertegui told Georgina that their families sailed on the same ship from Spain to the Philippines after the war.

Marilou and Georgina had dinner with Margie the previous night at the French restaurant La Maison Rose.

Other amigos onboard were Rafaelita Pelaez, president of Liceo de Cagayan (de Oro) University; Annie Osmeña Aboitiz who was with Val Arculli, Paqui Aboitiz and Quina Melendez; Diana Belaunzaran, Anne Marie Conejero, Pilar Cusi, Anna Marie Dizon, Cristin Ebrada and Cielito Elliott; Marichu Garcia and architect Tessie Javier who read one chapter of the novel before the day was over.

“La Oveja de Nathan” would soon be available in Cebu at the Fully Booked branch of Ayala Center’s The Terraces.

The store accepts reservations at the sales counter.