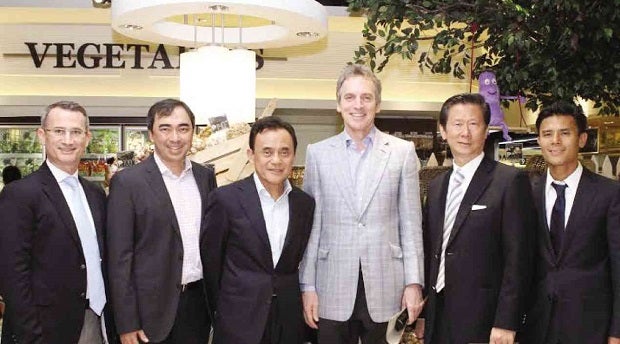 With its arsenal of the world’s—and the country’s—freshest, premium and rare finds, world-class design, and sophisticated shopping experience, Marketplace by Rustan’s continues to prove why it is the hottest supermarket destination in the metro for discerning shoppers and foodies with the launch of its Everyday Gourmet campaign.

The campaign includes a creative photo exhibit, “The Art of Fine Food,” which features some of the country’s most popular personalities who are known for their passion for food.

A special affair marked the launch of both the campaign and photo exhibit at Marketplace by Rustan’s that was attended by Rustan’s executives: Rustan Supercenters Inc. (RSCI) chairperson of the board Rico Tantoco, president and CEO Donnie Tantoco, RSCI chief operating officer Pierre Deplanck and VP for Rustan’s Supermarket Manuel Alberto. Also spotted at the event were Dairy Farm International Group CEO Graham Allan and Regional CEO for South Asia Alex Tay.

“We are happy to have tapped some of our most respected and well-known foodies, food photographers and food stylists for ‘The Art of Fine Food,’” said Tantoco. “While Marketplace by Rustan’s has quickly become known as the metro’s destination for unique finds, hot food novelties, upscale service, world-class design—basically becoming every foodie and shopper’s ‘happy place’—there’s no better way to reinforce what we stand for than by having these wonderful individuals, who are experts in food and flavor appreciation, affirm our thrust as a supermarket.”

The exhibit gathered images by noted food photographers Mark Floro, Mylene Chung, Rico Jose, Jun Miranda and Stanly Ong that showcase the world-class ingredients one can find at Marketplace by Rustan’s, as well as insights from the featured foodies on their “food personalities” based on the taste and ingredients they most prefer.

Actress, host and model Solenn Heussaff said, “The flavor that best describes me is spicy. I love everything that makes my taste buds dance and brings heat to my day. If I were an ingredient, I would most likely be cayenne pepper. It’s not too subtle or too strong but it gives you the right hit.”

Her brother, the restaurateur and celebrated food blogger Erwan also offered his own take. “I’d be salt, because it’s necessary everywhere, even in the sweet dishes. I am a lot like salt in a sense that I feel like I need to be on top of everything, all the time. My favorite ingredient has to be salted butter, because its simple complexity makes anything better,” he said.

Events whiz Tim Yap said, “I’m spicy, because I like that burst of flavor that assaults your sense, tingles your taste buds, gets you in the mood, makes you sweat and say ‘Whew!’”

Guests also had the chance to explore Marketplace by Rustan’s firsthand, going around the different areas and stations of the supermarket. Finally, a thrilling opera flash mob led by actress Pinky Marquez capped the event with a grand flourish, providing shoppers with a fun and refreshing surprise that further highlighted the distinct and topnotch shopping experience at the supermarket.

Since it opened its doors to shoppers last year, Marketplace by Rustan’s has taken freshness to a whole new level via a wonderful repertoire of products from all over the world. There are fresh fruits, produce, meat and dairy essentials, as well as imported groceries housed in a store-within-a-store concept called the brand shop, which boasts exciting brands such as Stonewall Kitchen (an award-winning US-based food company), Tea Forte, Ghirardelli, Rustan’s-exclusive brands Casino and Waitrose, and many more.

Also available are international health and beauty picks, as well as an extended ready-to-eat section featuring a pasta bar, baked potato bar and carving station, among others. There is also a wide array of Old World and New World wines; and even the first Eric Kayser bakery in the Philippines.

“At Marketplace by Rustan’s, we’re all about celebrating a balanced and enjoyable lifestyle,” said Alberto. “With campaigns like Everyday Gourmet, we hope to encourage Filipinos to eat well and live well through what the supermarket has to offer.”