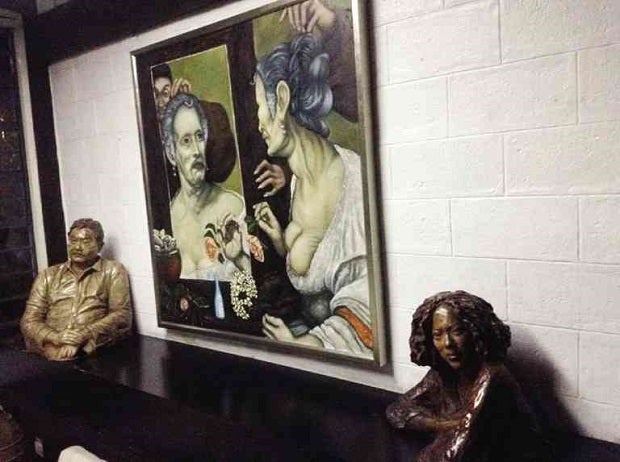 THIS is the Robert Langerneger painting Raymond “Moira” Lee and I co-own. I have it sixmonths and he has it the next six months, and so on. When I die it goes to him. It is a lovely arrangement for a lovely piece

Gifts of love and remembrance

An old santol tree. A narra laden with blossoms. A pandan tree grown so tall you cannot recognize it except for its hard, exotic, inedible fruits. A stunted chestnut. A golden shower in dazzling bloom. A Bangkok santol dropping its pulpy, charmless fruits all over our yard yet never outdoing in sweetness the hundred-year-old native santol by the gate.

A pink calachuchi. A botong tree with thigh-size branches, obtained from a vacation in Camarines Norte, lording over the garden. A cypress. A mahogany.  A sineguelas. A sparse clump of bamboo. A champaca. A pomelo tree. A palmera. An anahaw grown so huge its leaves can fan a royal wedding.

Those are the trees my husband planted in our medium-size lot. I used to wonder why he kept planting all those trees, what was he creating, a forest?

Now I know why. Today, the trees, well on in years, cocoon us in green foliage, absorbing the dust and the smog of the street. (Every tree allegedly absorbs two teaspoonfuls of pollutants daily.) The trees attract butterflies and birds of all kinds, native and also migrant ones that make me wonder what kind of a winter they were escaping from.

Mornings I sun in the garden, reading the bad news in the day’s paper. I remember my departed husband and send a prayer of thanks to him.

Trees used to be how people identified a house, not by its number, and surprisingly, a lot still do. Your driver will easily locate your friend’s house “with the two tall coconut trees,” or “the one whose fence is covered with cadena de amor.”

In a rural area, relates Lina Gueco, you can ask a barrio-mate to please deliver something to Aling Paring “who lives by an old santol tree with a pig tied to it.”

Trees have always been guideposts, even to the seasons. Coming home from vacacion grande (semestral vacation) as a kid, we would surely be welcomed by caballero trees abloom with fiery red crowns (now called fire trees). Or another wayside is lined with banaba trees thick with light-purple flowers.

One would encounter kapok trees, their long, pointed pods bursting and releasing wisps of cotton fluff to the winds. Kapok was used for stuffing pillows before Styropor took its place. Kapok is cottonwood in English.  A subdivision in Antipolo, Cottonwoods, has been named so because there are kapok trees around it.

A lot of places were named after the habitat of certain plants, or where these proliferated. Antipolo City was named after the tree on which a miraculous statue (Milagrosa) was supposed to have been found. Calumpit in Laguna is named after the kalumpit tree, as were Lumbang (Laguna), and Dao (Pampanga).

Quiapo comes from kiyapo, a cabbage-like water plant, Maynila from the nilad, a sturdy tree that grew in the swampland that Manila then was.

My horticulturist daughter Wendy says that Diliman was not named so because it was dark. There was a diliman plant—actually a fern, with long, sturdy rhizomes that was once used for tying fish traps.  She’s growing its cuttings. Wouldn’t it be lovely if the diliman plant could find a home, say, by the UP Diliman lagoon?

“Philippine Native Trees: 101 Up Close and Personal” is an absolute charmer of a source book peppered with personal tree stories. It’s published by Foundation for the Philippine Environment with Pablo Tobiano and Lamberto Un Ocampo as sponsors. All the following material comes from the book.

The Antipolo tree is sister to the breadfruit and its brother is the jackfruit. It has a milky sap once used for snaring birds.

The endangered ipil tree (Ipil Road in Forbes Park—yes, posh subdivisions also want Filipino identity) is an evergreen. Its lumber is used for heavy construction (posts and beams) and furniture.

The kalumpit tree (Calumpit town in Bulacan) has fleshy edible fruit used for jams and preserves. It also sweetens lambanog.

Guijo (for which a barrio in Malolos is named) is an important commercial lumber used for ceilings.

Kamagong (a street in Makati is named after it) was called “a tree of weighty dignity” by contributor Aliposa. It is prime hard timber used for house construction, fine furniture and hand crafts. A highly respected wood, now very rare.

Kamuning “was named after a little tree.” It used to grow abundantly in Philippine forests and of course in Kamuning, Quezon City. But due to urbanization and over-harvesting, it has almost disappeared.

Betis (the tree after which Betis in Pampanga is named) had a legend about a huge betis tree that stood on the site where the church now stands. The tree was said to be so huge that it cast its shadow as far back as Minalin town. When the tree was cut down for construction, its lumber was said to have been utilized for the beams, trusses and flooring of the church.

Molave (another street in Makati) is a tree with high-grade wood used for construction, quality furniture, and carving. Its hardwood is also good for agricultural implements. It’s also an ornamental tree. Status: endangered.

Pili (in Albay): Its edible nuts are made into sweets or salted confectionery. The oil of pili nuts is comparable to olive oil and used for suntan lotion and for cooking. The pulp of its fruit can be eaten raw or boiled.

Talisay (town in Batangas) is called an almond tree. Talisay is an evergreen with hard and heavy wood—alas, attractive to termites. Pulp of fruit wall is sweet and edible. Its kernel tastes like almond but is difficult to remove from the shell.  Leaves are medicinal.