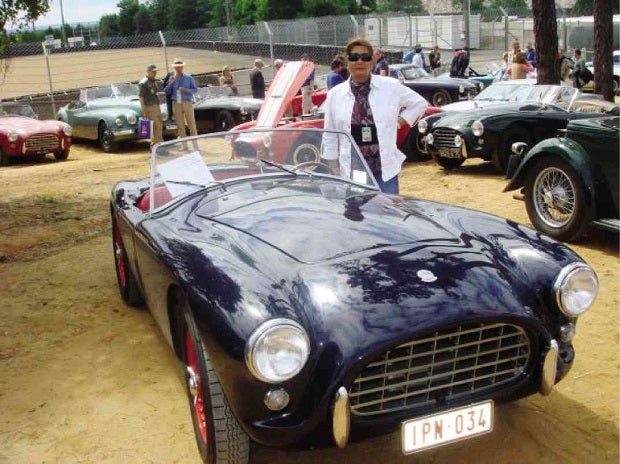 “MAINTAINING a car could cost as much as an education in Europe, especially if you are very OC,” says Tetta Agustin

In Europe, she drives a 1956 Mercedes Gullwing or a 1960 Bentley Continental Flying Spur across thousands of kilometers on roundabout roads, through bad weather and cracked pavements. But it’s not just to enjoy the glorious panorama of the continent.

“I like these rallies (rally racing) because you see nice cars and nice countries and meet nice people,” said model-turned-businesswoman Teresita “Tetta” Agustin. She has been acquiring vintage cars and joining rallies for classic cars the past 16 years.

“The drivers are international—Japanese, English, French and Belgian—who have the same passion as yours,” she added. “It’s like being with collectors of paintings who share the interest.”

The France-based Agustin has scored a couple of trophies for owning the best-looking cars. Her Ferrari 50 GT Lusso won the Mini Miduit for the Best Car at the Zoute Grand Prix in Belgium in 2004. The 1934 Packard Roadster, purchased from three-time Olympic skating champion and Hollywood star Sonja Henie, won in the 2012 Concours d’Elegance at Valescure in St. Rafael, south of France.

The concours is held after a racing competition in which the car is adjudged for its perfect restoration and appearance.

The prize? “Champagne with the trophy,” Agustin said with a laugh. “The car becomes more expensive if you want to sell it. Most winners don’t want to part with their cars.”

Agustin and her French husband, Christian Baverey, have just spent five months in the Philippines to escape the winter. She welcomed us in her home in Greenhills wearing a white hanky linen dress, her wrists dripping with charm bracelets.

Showing photographs of her 1964 Mustang Cabriolet, 1956 Mercedes Gullwing, and herself practicing on the driving circuit, she said, “I don’t want to look as if I’m bragging.”

She was not coy about her age. “I’m pushing 64. I’m an adult now,” said the husky-voiced ex-model.

Much has been written about Agustin’s eight-year modeling career for the houses of Givenchy and Saint Laurent in Paris which ended in 1982.

Over the years, she has been involved in business, running a remittance company for Filipinos in London, and a travel agency. In between, she lived the life of a jetsetter, hobnobbing with the rich and famous, including being the consort of former French President Valéry Giscard d’Estaing.

But no matter how much the press prodded her about her glamorous life and connections, Agustin always demurred.

“It’s complicated,” she would say, adding that her discretion was an acquired European trait.

In the early ’80s, she married an Englishman—“for convenience,” she admitted—to get a British passport. Their marriage lasted eight years, as she was always traveling.

She met Baverey, who is 12 years her senior, in the jetset circle. His family was into food manufacturing before it was acquired by Group Danone and subsequently Nestlé. He also owned a property management company which he sold off.

He’s a retiree who loves to travel.

With 50 years of experience with classic cars, Baverey was president of vintage car associations, among them the prestigious Bugatti Club. He bought his first car, a Ferrari, at age 25.

He once kept 44 cars in the family warehouses in Belgium and in the South of France. When he and Agustin decided to spend more time in the Philippines, half of the cars were sold.

Among the remaining prized possessions are prewar cars such as the 1929 Delaheye type 175. Of their younger cars are a 1955 AC Bristol and a 1960 Lancia Flamenia Cabriolet.

Baverey is also the proud owner of a 1929 Royce Schneider which has traveled only 18,000 kilometers. When he joined a rally from Lyon to Marseille, he traveled at 80 km in one day.

“I also have a 1929 Hispano-Suiza. It’s for collectors of antiques like myself who understand this type of car. But the new generation, they want the Mustang or cars made after 1960, because they are easier to drive,” said Baverey.

Some people acquire old cars as a status symbol instead of appreciating the vehicles’ heritage, he added.

In Europe, classic cars are considered investments, their value accruing from their provenance. People collect vintage cars as they would paintings.

“They can cost 100,000 euros and up to 2 million euros, depending on their history and rarity. Collectors’ cars were manufactured in limited editions, not mass produced,” said Agustin.

“When you buy a Mustang, you can sell at a profit with no tax. In France, if you buy a villa, you pay at least 50-percent tax,” said Baverey.

Remodeling a vintage car could easily fetch as much as P12 million, said Agustin. As with owning a modern luxury car, maintenance of historic cars is expensive, especially when it comes to replacing a spare part. If the motor of a vintage Mercedes Gullwing breaks down, for instance, the repair would cost 20,000 euros.

“Maintaining a car could cost as much as an education in Europe, especially if you are very OC,” said Agustin.

To learn how these vintage cars should be driven, collectors join specialized rallies.

“Each rally will have a place in your heart. You drive through important places like where Magellan was born. There’s a lot of jokes, laughter, history and spontaneity,” she added.

Rallies gather collectors of  prewar and postwar cars who share the conviction that it’s even better to drive their collectibles rather than just admire them. Held every spring and autumn, the races usually run from two to four days.

The events aim to relive the town-to-town races of the early 20th century and give drivers the thrill of authentic vintage driving while keeping to a standard speed over a set distance. It is also a test of teamwork between the driver and the navigator.

Joining these upscale rallies is not cheap. The cost is from 5,000 to 10,000 euros, which covers the driver, navigator and car. When Baverey and Agustin joined the Les Rallyes de l’Impérial in India in 2013, the entry fee cost was over 40,000 euros because the car had to be shipped from Europe. The participants shoulder their airfare and gasoline, and sometimes they prefer to bring their mechanic.

Agustin’s entry was a 1970 Mercedes 280 SL, a fairly young vehicle compared to other luxury cars, most of which were built before World War II. But Baverey maintained that their Mercedes was just right for the race since some of the roads were pockmarked.

However, the splendor of Udaipur, Jodhpur and Jaisalmer in Rajasthan made up for the tough roads and the lorry.

The car rally is governed by a time-speed-distance system.  Following a route book, the driver drives a certain route within a specific time, on a specific average speed. The route is split into stages, with checkpoints at the start and finish.

Meanwhile, a navigator guides the driver through the course and keeps track of the programmed arrival time.

Agustin explained that the driver is penalized for every second he or she arrives early or late at the final checkpoint. The goal is to be on time.

The next day, the drivers move to another location.

A typical day at the rally begins with breakfast in a fabulous hotel. Cars are flagged off at one-minute intervals to start on the morning leg, covering about 240 km. The lunch break is in a charming inn or restaurant to give the cars a rest.

After they freshen up, the drivers return to the road for the day’s final leg. At sunset, the drivers repair for cocktails and chitchat before dinner in a Michelin-star restaurant.

It may seem fun, but, Baverey said, rallies can be challenging especially on unfamiliar roads. There are hazards such as encounters with animals, the police or local drivers.

“It can get scary when the car breaks down,” said Agustin. “We’ve seen friends who died in accidents. They lost control or they drove too fast and didn’t check their cars thoroughly.”

Participants face the competition with different degrees of earnestness. Baverey is passionate and gets upset when he is recorded as second to the last. In contrast, Agustin doesn’t even take her timing too seriously.

“This is embarrassing. We join rallies but we’re not very serious competitors,” she said with a laugh.

Nonetheless, they’ve just been on the road for Les Bastides in Ireland this May with their 1960 Aston Martin DB4.

Asked who’s the better driver between her and her husband, Agustin replied, “Women have faster reflexes.”