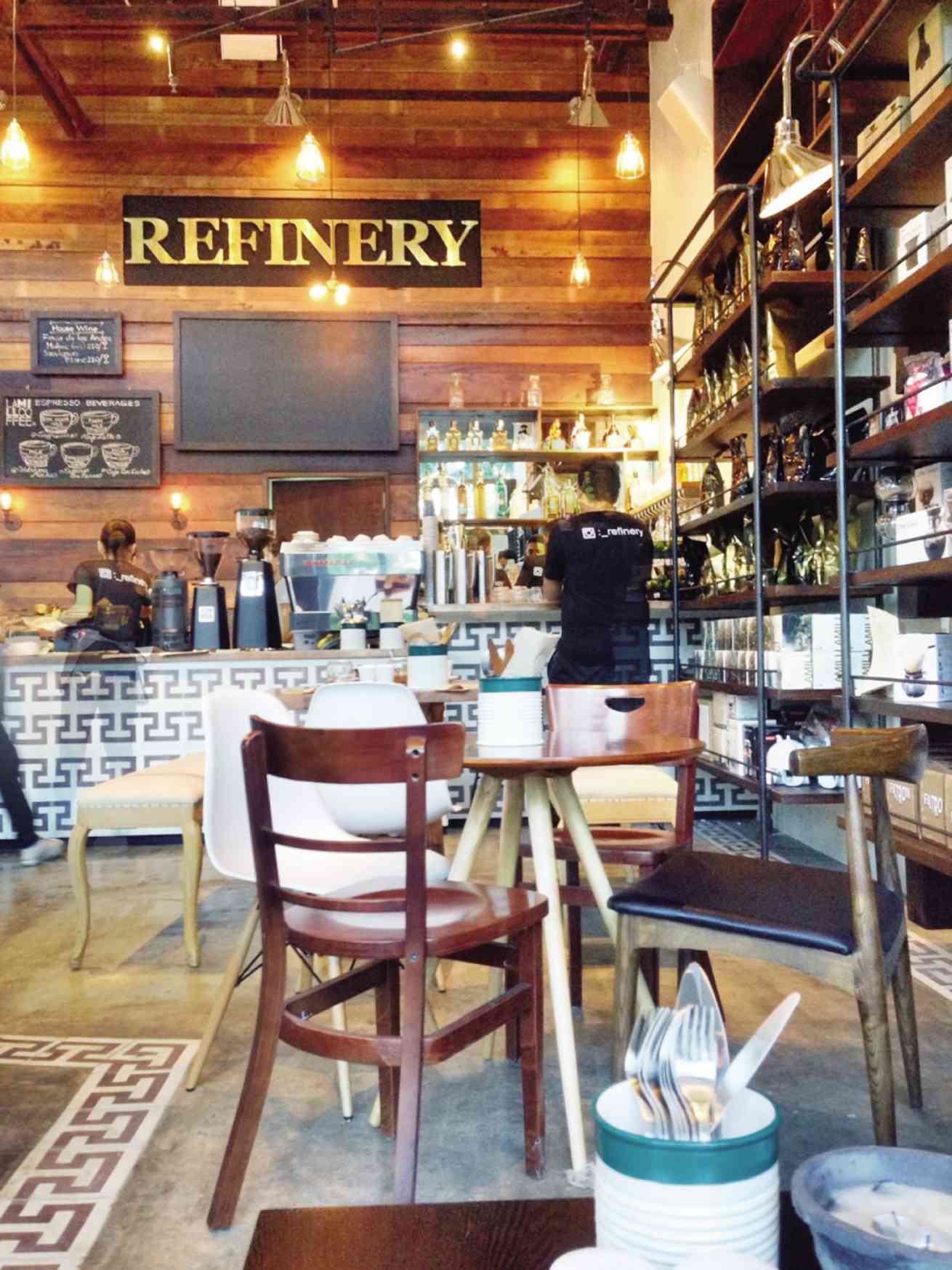 The coffee is really good. I’d like to get that out of the way and down on paper first thing, because I believe in focusing on the positive.

Refinery, the new café and restaurant at Rockwell, has plenty of potential, and may soon grow into its role as upscale artisanal coffee shop and hangout.

I’m writing this review backwards so that readers don’t have to skip to the end to read the conclusion, and also because they might be tired of reading the same review over and over. I started out the normal way but I realized that I’d written this review before; which was perhaps because I feel like I’ve visited this restaurant before, even if I haven’t.

The décor, which is New York industrial with Edison lamps turned down low and exposed cabling and ducting, seems to be every other restaurant in Manila these days: there must have been a bargain sale on these blueprints on Alibaba. I am desperate to see a ceiling these days; exposed plumbing was a nifty idea the first 100 times around, but the concept is well past its sell-by date.

The menu is also wretchedly trite, a collation of what every other new restaurant that’s opened the past year has been doing. Yet another upscale burger? Eggs Benedict? Steak and eggs? Present and accounted for.

They serve nearly the same stuff from across the road at Hatch 22, where the service is more coherent, and from many restaurants across the highway at BGC.

I do try my best to give new restaurants a bit of leeway in terms of spotty service, although I can name quite a few restaurants that were able to operate smoothly from day one, or at least faked it till they made it. A lot of the time it has to do with incompetent waitstaff, and here is where restaurateurs with several restaurants under their belt have an advantage, because they can shift their best people to the new opening.

Unlike most new restaurants, though, Refinery doesn’t seem to have bad waitstaff so much as very confused ones. One brisk young lady came up to us and said straight off the bat that the burger and pasta were not available. Another one bustled up and recommended, specifically, the burger and Hangover pasta, so we ordered those, as well as Rooibos tea and orange-flavored cappuccino.

A third came over and reiterated that the burger was not available, though the pasta was, and complimented us on our choice of the Rooibos because all their teas were loose-leaf teas. Shortly afterwards, someone came over with hot water and a teabag.

I don’t want to go on too long on this tangent because the staff were all very nice and accommodating, and gave the impression of competent people trying their best to maintain a semblance of knowing what they were doing despite a complete absence of information.

The food ranged from uninspired to confused, or at least confusing. On a chopping board arrived our shirred eggs, their interpretation of which consisted of a thick piece of soft bread with a hollow gouged out in the middle, which was filled with gloopy, rich, vibrantly orange egg. (A shirred egg is an egg baked in a vessel of any sort, usually a ramekin.) You could either choose to eat all the egg first without any bread, or cut into the bread, which releases the egg yolk over the bread, the chopping board, the table, the floor, and one’s clothes.

This is the kind of food that looks very good on Instagram but is of little use as something that one can actually eat.

The Hangover pasta seems to be, more or less, carbonara pasta with a false identity and a new name; it also tasted like carbonara pasta, but without much flavor, which is perhaps what one requires when one has a hangover. Or perhaps it was created under the influence of one.

But, to reiterate what I said at the beginning, the coffee really is very good. I don’t pretend to be a coffee connoisseur, and much of the Third Wave stuff really goes over my head, but this was truly excellent coffee, and I would recommend those queuing for the Starbucks across the road to go a couple of steps north and have one of their deceptively mild injections of caffeine into the bloodstream.

The teas are plentiful and interesting as well, and the cup of Rooibos that we did have was very nice indeed. For those who drink, I hear that the alcoholic beverages are worth the price of entry.

It’s truly a pity they don’t have good food, let alone food with a sense of originality. It seems to be such a grudging afterthought to the drinks and the coffee; yet I’m sure there are plenty of chefs out there who are longing to flex their creative muscles in the kitchen, so why do a carbon copy of a carbon copy of a menu that was popular two or three years ago?

The bill will also come as something of a shock, though a pleasant one this time: It’s actually less expensive than many of the restaurants in the mall basement. For drinks and coffee and plush pleather couches I’d meet friends here, but the food is a wasted opportunity, and the servers are desperately in need of a leader to guide them out of the haze in which they stumble.

Despite its name, what this restaurant badly needs is a great deal of refinement, and perhaps a new menu with actual food. In the meantime, the coffee is very good.