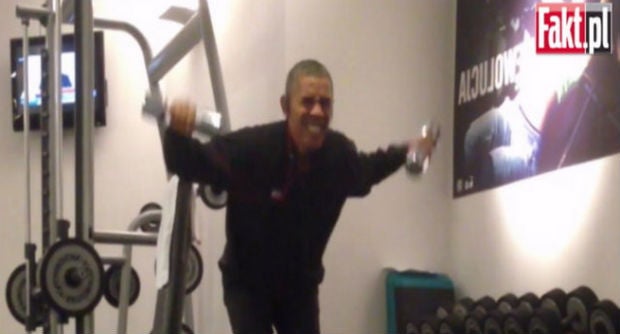 Obama captured on video working out in hotel gym

WARSAW, Poland — Like millions of gym goers, President Barack Obama grimaces while lifting weights. Like millions, he does lunges and step ups and tests his cardio on an elliptical machine. Unlike millions, he is surreptitiously captured on a video that goes viral on the Internet.

A one-minute, 25-second clip of Obama exercising in the gym at the Marriott Hotel Warsaw in Poland surfaced Wednesday, offering an unusual glimpse of the president in full workout mode. The clip, made by a hotel guest, shows Obama in a black gym suit, ear buds in place, choosing weights and working through an exercise routine that includes shoulder presses and deltoid lifts. Obama stayed at the hotel Tuesday night at the start of a three-country European trip.

The Secret Service, whose agents accompany the president at all times, confirmed the legitimacy of the video. No guest was asked to refrain from taking pictures.

Obama routinely works out at hotel gyms during his travels. Hotel guests are permitted to remain in the gym during his workouts. Anyone who stays in a hotel where Obama is spending the night must pass through a metal detector. The Secret Service did not consider the Warsaw hotel incident a security violation. Secret Service spokesman Edwin Donovan said the gym visit, which was not on Obama’s official schedule, was no different than the president’s surprise attendance at a restaurant where other diners can gawk and take pictures.

The night our editor came face-to-face with President Obama