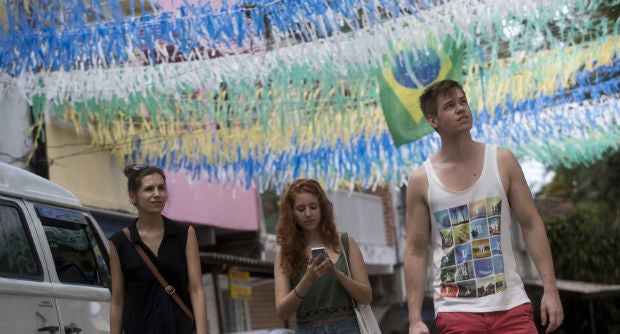 In this May 23, 2014, photo, tourists walk on a street decorated for the upcoming World Cup, in Rio de Janeiro, Brazil. Visitors to Brazil will find the land of soccer, sun and surprisingly sky-high prices. It’s not just hotels and flights that are wallet busters. It’s the $35 pepperoni pizza, the $10 cocktails and $17 cheeseburgers, standard prices around the country. AP

If one’s budget isn’t immediately busted by the flight or the hotel, it will soon be done in by the $10 caipirinha cocktail, the $17 cheeseburger or the $35 pepperoni pizza. And those are the prices city-dwelling Brazilians saw even before the World Cup set off a new standard of sticker shock.

“Prices in Rio are absurd,” Maria Anda, a Norwegian artist who has lived in Brazil for a year, said while enjoying the sunset on Ipanema beach. “I still like it. It’s worth being here, but it’s not paradise.”

The dizzying prices are referred to here as the “Custo Brasil,” or “Brazil Cost” — the mixture of high taxes and steep import tariffs, combined with bad infrastructure, a dose of inefficiency and a thick shot of bureaucracy.

Demand leading up to a big event like the World Cup naturally raises prices. But, since costs already were high to begin with, tourists should prepare to dig deep into their wallets and not be too miffed to receive goods or services of inferior quality, said Rafael Alcadipani, a business administration professor at the Getulio Vargas Foundation, Brazil’s top think tank.

“Anything you buy in Brazil will be more expensive than in the United States or Europe, but the quality is going to be worse,” Alcadipani said.

Here is a sample of the charges awaiting visitors coming for the World Cup:

—Single room at four-star hotel in Copacabana: $400 a night.