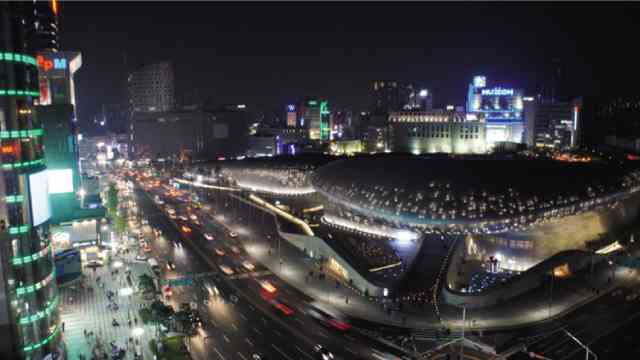 GO IN the evening and see why the Starry Garden’s view is a favorite among photography enthusiasts.

Dongdaemun in Seoul is one of South Korea’s most popular shopping districts, while Gangnam draws many people who hope to get a glimpse of their favorite K-pop stars.

These fans, however, should make Dongdaemun one of their first stops because it offers the latest attractions that will make their Hallyu dreams come true.

At the ninth floor of the Lotte Fitin shopping center is Klive, an interactive concert experience currently featuring Big Bang, 2NE1 and Psy.

Look up the elevator panel and you will see an augmented-reality screen with 2NE1’s Sandara or Big Bang’s Tae-yang waving at you to come and see them.

The elevator doors open to a life-size mural of Big Bang, ready to start your Instagram diary of the Klive experience.

According to Sung Jin, our tour guide from the Korea Tourism Organization (KTO), Klive opened just three months ago, but it has already attracted such a huge number of visitors that it’s become one of KTO’s top tourist spots.

Entrance to Klive is about $33; you can reserve tickets online or purchase them at the booth on the ground floor of the mall.

There are three to four concerts a day, starting at 2 p.m. Each show runs for about an hour each, with featured artists or groups performing two songs apiece.

While waiting for the concert to start (make sure to come two hours ahead of show time to enjoy the other attractions), Klive has several tricks up its sleeve to excite K-pop fans. On display are memorabilia from Big Bang’s concerts; various merchandise spread out in a big  area; and photo booths with 3D screens where you can pose with Psy and your favorite members from Big Bang and 2NE1.

There are other cool augmented-reality stations. The square AR show allows you to get inside a limo van where your favorite K-pop stars are hanging out, while the star photo box gives you carte blanche to pose and have photos taken with your favorite group.

At the secret window, meanwhile, you face blank, flickering screens. Move behind the secret viewing area and the screen comes to life with special unseen footage of K-pop idols.

At the top floor is a gallery where you can see the works of featured Korean artists.

A café serves snacks before the concert. Though the crowd is thinner during the afternoon shows, we recommend you go in the evening because the Starry Garden, or the balcony area, affords a view of the street’s busy intersection overlooking the futuristic Dongdaemun stadium and the avenues filled with cars whizzing by. The view is so fabulous that the rails are obstructed by photography enthusiasts toting tripods for long-exposure shots. You may have to elbow your way for a good spot on which to take a snapshot.

But nothing will prepare you for the space-age hologram concert. Just like a live gig, there’s a DJ opening act, as well as three amazing dancers.

The concert hall is flanked by photo booths; don’t skip this part, and have your photo taken for a great surprise.

The first artist who appears is Psy, and the hologram is so realistic that he looks as if he’s just a few feet away from you. Klive’s hologram technology blows Obi-Wan Kenobi and Jerrica/Jem out of the water.

Of course, “Gangnam Style” and “Gentleman” play on, with dialogue interaction in between.

Everything is virtual reality, right down to the artists’ interaction with the concert audience. What’s truly amazing though are the dancers who move seamlessly with the holograms, dancing like they are really onstage.

Those who have their photos taken at the booths will have the opportunity to “join” the stars onstage. A Japanese fangirl is so thrilled when Holo-T.O.P gives her a hug that she and her friends scream; the chosen ones not only get to interact with the hologram versions of the stars, they also get to take home a special token from Klive.

Though there are only three K-pop stars headlining the “concerts,” Klive plans to add more artists soon.

Getting there via Cathay Pacific

IF YOU want to visit two destinations in one go, fly to Seoul via Cathay Pacific’s “twin-city” experience. The airline gives you access to the gorgeous Hong Kong International Airport (it’s the best airport to be stuck in), when the plane makes its scheduled stopover.

Cathay Pacific’s luxe Hong Kong lounges let you take a shower, stuff your tummy with dim sum and noodles, or extend your trip for a day by stepping out the airport to do last-minute shopping.

For more information on specific tour and travel packages, contact Cathay Pacific’s Manila office at 7570888 or Korea Tourism Organization at 8800312.