The kids are all right | Inquirer Lifestyle 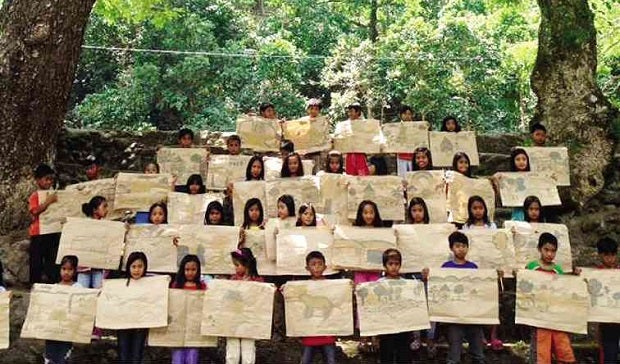 KIDS pose with their artworks.

The kids are all right

TINGLAYAN, Kalinga—Stories of activism are for 9-year-olds to tell, too.

During the summer break, children and teenagers displayed their flair for the arts at the Eco Arts Exhibit here last April 21-24, with works that called for the preservation of culture and nature.

A grade school pupil drew, with clay, a young man wearing a baag (G-string) and playing a nose flute; another student rendered environmental martyr Macliing Dulag. The works displayed on the Tinglayan Central School patio are among the products of a soil painting workshop.

Masks, charms and sculptures also hung on a tree and a bamboo installation nearby, as much talked-about theater shows on the eves of April 21 and 22 were undergoing final touch-ups.

“Tinglayan is one of the municipalities in the Cordilleras that have maintained their forests,” said Hector Kawig, the Eco Arts Workshop coordinator of Cordillera Green Network (CGN). This is why the nongovernment organization hit the winding, eight-hour road from Baguio City to tell youngsters about eco-friendly art.

On the CGN jeepney, a team of young artists brought textile scraps, old newspapers and Manila paper. The community provided the rest of the materials: clay for the soil painting and sculpture workshops, plus the plots for the theater showcase, among others.

The workshops culminated in the exhibit.

“They are full of stories and imagination,” Kawig said of the kids. The events culminated in the native rice or Unoy festival.

The soil paintings would introduce visitors to local gems beyond the mambabatok Fang-od, the most visited attraction here. Kids drew the Chico River, whose rushing water produces an ambient sound. They also illustrated the coexisting legends of a mountain, aptly called Sleeping Beauty.

“The kids [made] stuff they saw … and what they wished they had,” said Tara Natividad. The artist from Tam-awan Village in Baguio took charge of the mask making and sculpture workshops, which produced bulol and pottery as well as cartoon characters—and a cell phone.

“Every day was a performance,” recalled Rey Angelo Aurelio of the theater workshop. “There were significant developments for our plots and acting abilities every hour.” Teachers, community leaders and pastors became cultural advisers for the three stories, one tackling family dynamics and two taking on overhunting and dynamite fishing.

On the eve of April 21, the meek Nanette-May Uleygan, 15, morphed into a wide-eyed narrator. A newbie like most, if not all the theater students, the activity was “challenging but fun.”

The teenagers had to overcome the inhibitions of young age and cultural diversity—the seven tribes here speak different variants of the Kalinga language—but “proud delivery made the plays special,” said Aurelio. “The diversity became a tapestry of hues.”

Uleygan said the workshop strengthened her pride. Respecting nature “has been taught to us growing up,” she said. “These [Eco Arts] events help us live them out.”

“They are artists in their own way,” said Natividad. After brief lectures on the basics, the participants were practically on their own. “These kids have a lot of talent,” added Aurelio.

“They can mold, stitch and tie like artists,” Kawig agreed, but one other thing stuck in his mind.

“A kid tore a sack and took the strings during a god’s eye workshop. She made a god’s eye and gave it [to a facilitator] as a gift… If all the kids [can] show the same initiative, that is real impact.”