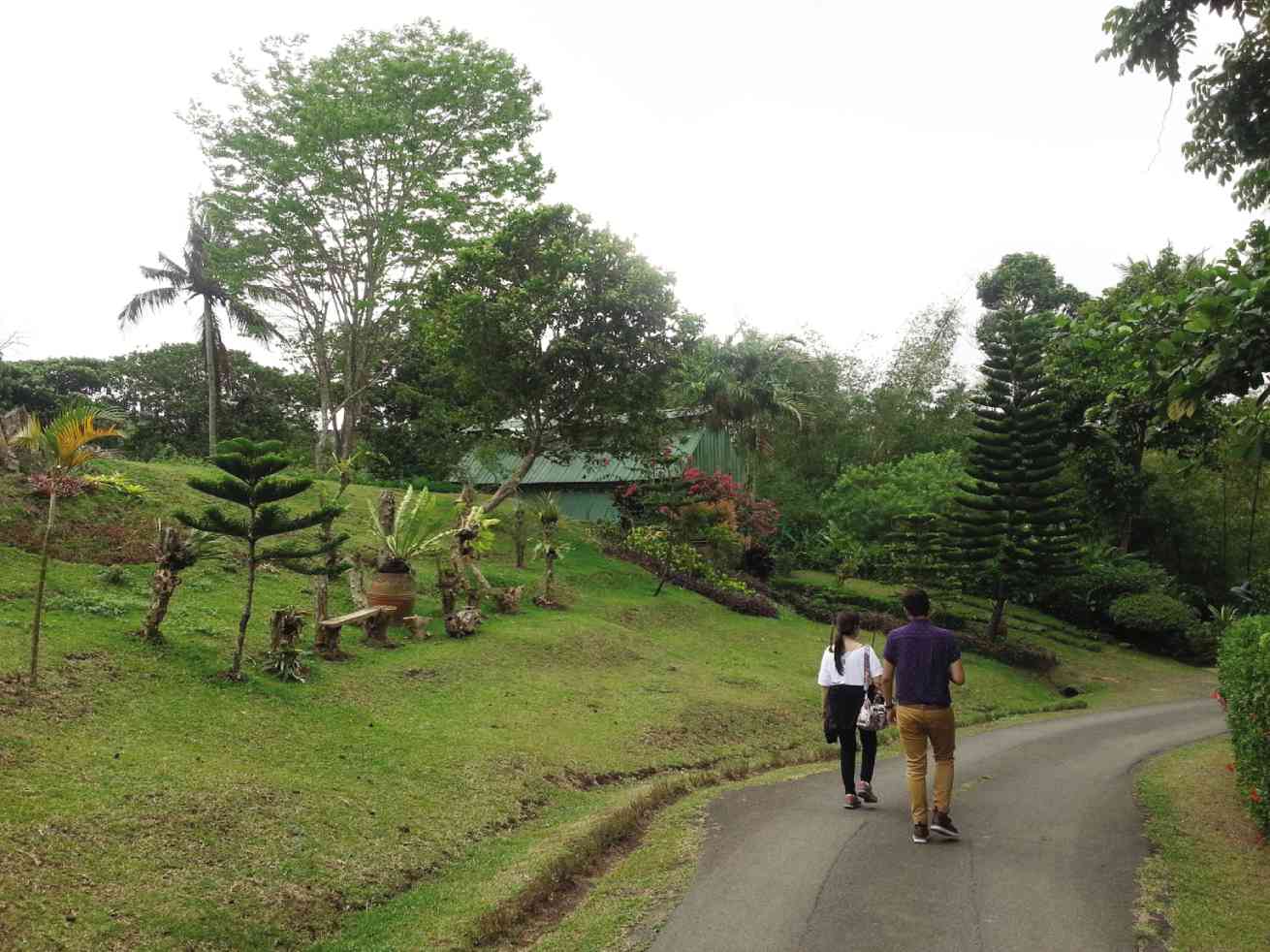 GOURMET Farms, a sprawling 10-hectare estate, offers activities that will rekindle one’s appreciation of nature and its bounty. PHOTOS BY POCHOLO CONCEPCION

The rainy season may have arrived, but the weather still gets uncomfortably hot on most days. There are two ways to escape the heat: one is by frolicking on the beach; the other, by hiking up a mountain.

But you might end up feeling tired, if not more stressed, getting to and back from these destinations that are quite a distance from the city and rather expensive.

Fortunately there’s another option—a place not too far from urban dwellers where a cool breeze blows, healthy cuisine can be had, and peace and quiet can prove conducive to a weekend retreat that nourishes mind and body.

This is Gourmet Farms on Aguinaldo Highway in Silang, Cavite, 45 kilometers or about two hours’ drive from Manila.

It’s the same site of the original Gourmet’s Cafe and Restaurant, where people used to stop for snacks and coffee before driving on to Taal volcano or other tourist spots in Tagaytay.

But these days, the place is no longer just a stopover but a tourist destination itself.

Gourmet Farms offers activities that will rekindle your appreciation of nature and its bounty. The place sits on a sprawling 10-hectare estate, six hectares of them devoted to organic farming. Romaine and green ice lettuce compete for space alongside culinary herbs tarragon, curry parsley, flat parsley, lemon balm, citronella, dill and basil.

From Mondays to Fridays, students and professionals can opt for a farm tour that includes: lettuce picking and herb planting; a salad demonstration from professional chefs at Gourmet’s main restaurant, The Dining Room; free drinks, and a five-percent discount on Gourmet Farms Inc. products at the old Cafe, now known as the Country Store.

Also within the estate is St. Joseph Sanctuary or simply The Sanctuary—a landscaped compound composed of a 10-room guest house, a chapel, a conference center and an outdoor pavilion.

The sight of trees, flowers, plants, grass lawn, a duck pond and meandering streams in the area is guaranteed to soothe one’s nerves.

The Sanctuary is the venue of a weekend program called “Solitudo,” that Gourmet Farms owner Ernest Escaler described as “a spiritual retreat combined with the wellness aspect of physical detoxification. The idea is to create a spiritual and physical experience of cleansing to jumpstart the body into a healthier lifestyle and a clean spirit.”

A Jesuit priest presides as retreat moderator, while meals consist of loading up on vegetables and juices for the physical detox. Arrangements can also be made for groups of 10 to 15.

Escaler, a businessman who is also a patron of the arts and sports development, said that his estate used to be an orchid farm until he turned it into a coffee-roasting facility.

In the 1980s, he was the biggest coffee trader in the country. “When the world price of green coffee (used for making instant coffee) dropped, I asked myself, ‘why are we exporting coffee, why don’t we develop the taste for fine coffee in the Philippines by roasting it and telling people to drink brewed coffee,” he recalled thinking.

At the time, Escaler recalled that California cuisine, which focused on a healthy diet, was also becoming a trend. “Gourmet’s Cafe and Restaurant was put up to educate people on how to eat salad and drink the perfect cup of brewed coffee,” he said.

At the back of the estate, a coffee-roasting facility was built to help farmers affected by the diminished demand for coffee in the global market.

“We’d buy the raw coffee beans from farmers, then we’d roast and package them for sale,” said Len Reyes, vice president for food and beverage of the Escaler Company Inc. Group which operates Gourmet Farms.

Roasted coffee, organic lettuce and herbs, as well as salad dressings, pasta sauces and indigenous tea, have become household names under the Gourmet’s and Kitchen Exclusives brands—all of which are also available at the Country Store by the roadside of Gourmet Farms.

The Country Store, which remains a favorite stopover for pasalubong, also serves salads, sandwiches, pastries, and, of course, the now-famous Gourmet’s brewed coffee.

“I think we were ahead of Starbucks,” said Escaler, who ordered a cup of espresso at The Dining Room as he and Reyes expounded on the virtues of drinking coffee.

Reyes noted that the old notion of caffeine in coffee being bad for the heart has been disproved by research showing that in fact, coffee has powerful antioxidants.

“Arabica is the best variety. The taste is balanced, it has sweetness, bitterness, acidity. It’s aromatic,” he explained. “Robusta is used for instant coffee.”

Aside from coffee, pasta and a do-your-own veggie salad are highly recommended in this place.

The sense of euphoria from the caffeine is heightened as one takes an exhilarating walk on the winding, uphill road to the farm. But don a light jacket as the weather can turn nippy in the afternoon, almost like that of Baguio.

As you amble on and encounter the lush vegetation and wide-open spaces, you’re bound to get into a contemplative mood and might just find yourself being lulled into imagining a refreshing nap in one of the guest rooms at The Sanctuary.

“When I built the Sanctuary,” Escaler recounted, “it was a payback to God for the graces He has given me. This is His place. And I’d like to think that people who come here are called by God because He wants to talk to them.”

People who sign up for the “Solitudo” program, he said, would appreciate shutting down the noise and clutter that hound their daily routine. “Just lie down. Don’t think of anything and maybe God will talk to you through the rustling of the leaves or the sparkle of the stars…”

Though he is well-traveled, Escaler said he’d never live anywhere else but in the Philippines. “Because there’s something about our tradition that you don’t find anywhere else in the world.”

There are many things one can learn in life, he pointed out, and every day is a new discovery.

One of those discoveries is that a visit to Gourmet Farms, whether for a few hours or a weekend, could be more satisfying than rushing to overcrowded beaches and treacherous mountain resorts.