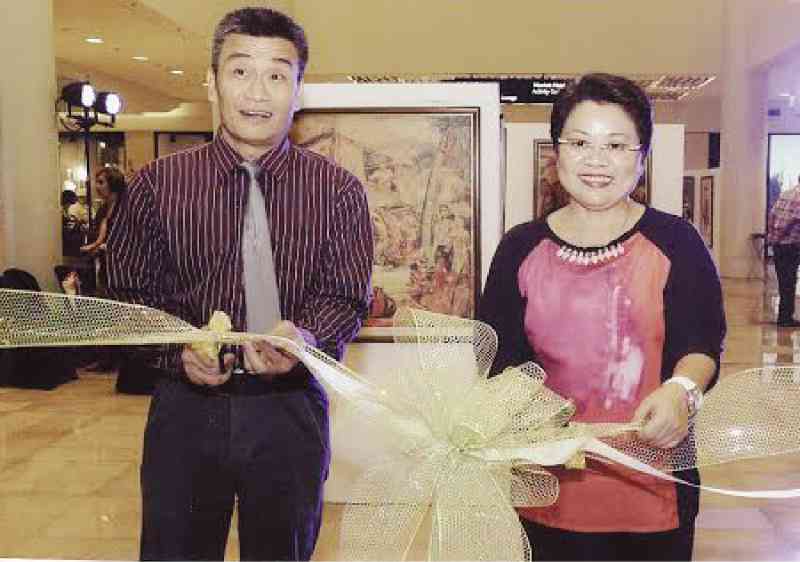 On this occasion Georgina came with good friend Marilou Prieto Lovina with whom she had also come seven years ago. That long? They asked, resolving to come more frequently. When’s the next book launch?

For the occasion, Carmen adorned the dinner table with her colorful shell craft place mats and tasseled napkin holders. They sell like the proverbial hot cakes at her Ayala Center Cebu booth, Carmen’s Linens.

Present at the dinner were Michel and Amparito Lhuillier, Rosebud Sala, Teresin Mendezona, and Margie Taylor whom Carmen had consulted for the wines served. Catching up with the group (their plane had been delayed) were Carlos Madrid and Jose Maria Fons of Instituto Cervantes.

Chef Adrien Guerrey was congratulated for the excellent French menu prepared. There was pâté de foie among the starters, followed by a well-condimented salad. For entrée, the guests had a choice of sea bass or duck confit.

As stated in a previous column, copies of Antonio Abad’s Zobel Prize-winning novel in bilingual edition (English and Spanish) was exhausted at the book’s launching. The good news from Georgina is that it is now available in Cebu at Fully Booked and National Book Store at Ayala Center Cebu.

For those residing in Manila, Georgina reminds them “La Oveja” is also available at the Ayala Museum in Makati City. Speaking of the Ayala Museum, it recently had an activity in collaboration with the Ayala Foundation.

This had to do with the observance in 2014 of the birth centenary of National Artist for Visual Arts Carlos Francisco, better known as Botong. Part of the celebration was a traveling exhibit, “Botong Francisco: A Nation Imagined.”

It stayed for a week at The Gallery of Ayala Center Cebu. At the opening, the ribbon was cut by Ayala Museum senior curator Kenneth Esquerra and Bong Dy, deputy general manager of the Ayala Center.

A 15-minute documentary film by Peque Gallaga about Botong was shown on opening day. Guests admired the 25 scaled reproductions, among them “Bayanihan,” “Harana,” “Maria Makiling” and the unfinished “Camote Diggers.”

Speaking of art exhibits, Qube Gallery’s Jon Gotiong and Maris Holopainen welcomed guests to a group show to mark the 77th anniversary of the Cebu Art Association (CAA). It is titled “A New Beginning” and runs up to June 12 at the Henry Hotel.

The CAA was established on Aug. 22, 1937, with the late Julian Jumalon as its driving force. It was then called the Independent Artists’ Guild. Among the first members were Oscar Figuracion, Ricardo Avila, Fidel Araneta, Silvestre Orfelia, Emilio Olmos and Jose Alcoseba.

The group gathered to paint beneath a big mango tree on the road to the Provincial Capitol, now the site of the Cebu City Museum and Library under the care of the city’s Cultural and Historical Affairs Commission.

Mel Tamayo attended the Qube Gallery opening with his wife Baby. Dennis “Sio” Montera, CAA president, asked Mel to say a few words which he gladly obliged. He admonished the artists to avoid trending. He also encouraged them to obtain excellence “by being yourselves.”

In the future, Qube Gallery may have an exhibit by Sio Montera. He is one of the top abstract painters of his day, but he can also do vivid portraits. We mentioned one he did of the late Lydia Ibañez. He smiled as he said, “I have done two of her.”

Mel Tamayo admitted that failing eyesight prevents him from painting. Collectors drop by his place in search of his famous “Tartanillas,” inspired by the horse-drawn vehicles typical of the Visayas.

Maybe a retrospective on Mel’s tartanillas can be organized, somebody suggested. Someone else gave the idea that perhaps CAA members can do a series of tartanilla paintings in tribute to Mel, at the Qube Gallery.

Twenty ballet and contemporary dancers took part in the ultimate and most comprehensive dance workshop ever held in Cebu under the aegis of the Metropolitan Ballet Theater company of Fe Sala Villarica.

It was held from May 29 to June 1 at the dance studio of Mango Square. Intermediate, advanced and “pas de deux” classes were conducted by Osias Barroso, co-artistic director (with Lisa Macuja Elizalde) and ballet master of Ballet Manila.

The sessions on contemporary dance were given by Faith Javellana, the artistic director of the School for Theater Arts and Dance in Cagayan de Oro City. The workshop also offered a session on Pilates by Maia Franco, a lecture on nutrition by Dr. Vivina Yrastorza; and mime/acting classes by Benjie Diola.

Chris Manlunas, premier danseur of the company, lectured on ballet history and vocabulary, many of those terms being in French.

We had the opportunity to meet Osias and Faith over lunch hosted by Fe Villarica at the Beehive restaurant. We also learned that the Metropolitan Ballet Theater will perform some time in August at the Marco Polo Plaza Hotel’s ballroom. In the program are a sequence from “Sylvia” and the dreamy “Le Spectre de la Rose.”