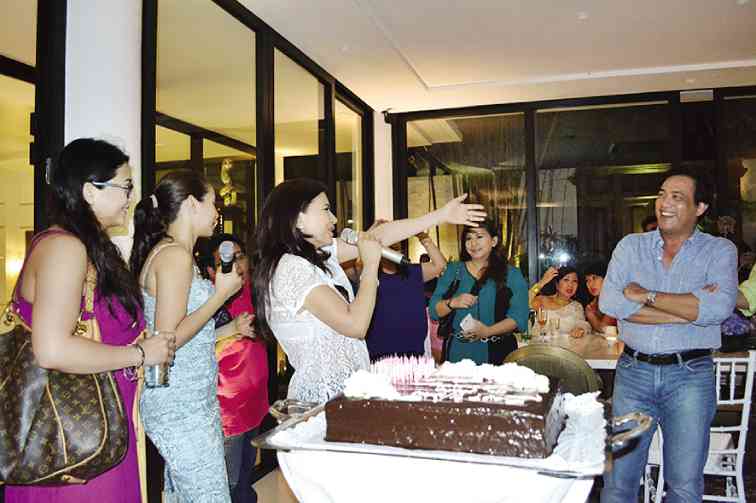 ZSA ZSA Padilla prepares to blow the birthday cake with 50 candles, with daughters Karylle and Zia behind her, and Conrad Onglao before her. PHOTOS CATHY RODRIGUEZ

To be clear and honest, I wasn’t there at last Sunday’s dinner hosted by Conrad Onglao for his love, Zsa Zsa Padilla. I was in another sweet couple’s milestone affair, the 30th wedding anniversary celebration of Chito and Anna Sobrepeña.

But friends I ran into last Sunday kept asking me if I was going to Conrad’s dinner. It was obviously a talked-about affair, even if it was private and only for a few of Zsa Zsa’s friends in show biz, her family, and a select few of Conrad’s buddies.

Fashion designer-turned-entrepreneur Jeannie Goulbourn of Silk Cocoon said she was hopping over to Conrad’s dinner from the Sobrepeñas. Jeannie is a close friend of Conrad. Both have been together in good times and bad.

When Jeannie’s daughter Natasha (in whose honor the Natasha Goulbourn Foundation was formed) died in Hong Kong some years back, Conrad was one of two friends who accompanied Jeannie on the painful trip. The other friend was Nena Tantoco.

The dinner was held in Conrad’s beautiful home, which this leading architect designed and built. It was special because Zsa Zsa was turning 50, and this was her first birthday celebration since they became a couple a few months ago.

According to Cathy Francisco, who works with Zsa Zsa, most of the guests were the actress’ colleagues from the TV series “Dyesebel” and “Budoy,” the Sunday show “Asap,” and some of her old friends in the music scene including Basil Valdez. (Cathy provided the photos.)

They sang the night away:  Gary Valenciano and Zsa Zsa in a duet in “Used to Be”; Basil, “Sana ay Ikaw na Nga”; Christian Bautista, “I Left My Heart in San Francisco” and “Maria”; Rajo Laurel in a duet with Agot Isidro in “Unforgettable.”  Zsa Zsa and her daughters Karylle and Zia, “Happy.”

And for Conrad, she sang “You.”

It was two days later, on Tuesday, that we were with the couple at the launch of “Best of Cocoon,” the coffee-table book of Cocoon magazine published by Hinge Inquirer. Zsa Zsa accompanied Conrad to the launch at Kuysen showroom.

Zsa Zsa enjoyed meeting Conrad’s colleagues and even had her book autographed by them. If in the past weeks, Conrad has been accompanying Zsa Zsa to “Asap” and be in starstruck mode, this Tuesday night, Conrad said, it was Zsa Zsa’s turn to be “architect-struck.”

But why were we not surprised that Zsa Zsa was looking that night for Manny Miñana, among all the architects?

Manny has this ability to decipher your character, past, present and future by reading your penmanship. He “reads” handwriting. For instance, he even did a lecture on the handwriting of José Rizal.

He “read” the handwriting of Conrad and Zsa Zsa for compatibility a few weeks ago. What did he find out?

We’re not telling, but the couple looked happy and content that night.