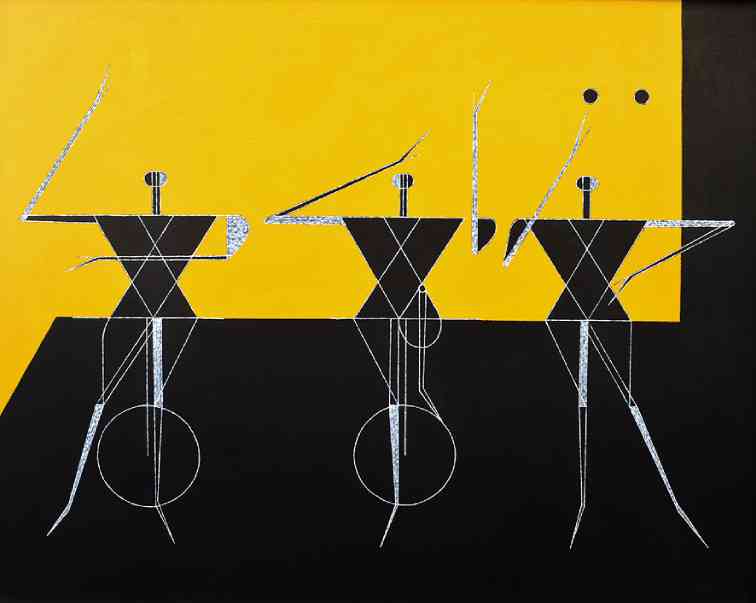 In connection with the 116th Independence Day of the Philippines, Art+  Magazine  teams up with The Podium to present an  exhibition of the works of National Artists Federico Aguilar Alcuaz, Arturo Luz and Abdulmari Imao, and those by Presidential Medal of Merit honoree Juvenal Sansó on the second level of the mall, until June 12.

Imao is considered the most “Asian” of National Artists. His pioneering practice uses recurring folk motifs drawn from his Sulu heritage, which connects to the wider world of Southeast Asian mythological traditions.

Thus, this consistent and successful use of folk themes goes beyond the cliché appropriation of genre scenes common in Philippine art—creating and assuming Southeast Asian archetypes to retell the myths and legends of the culture of his birth.

His most familiar motif, the sarimanok, is essentially a link to the story of a rooster in the first of seven heavens. That motif persists in various Southeast Asian cultures, as in the serpent naga of Malaysia, the most evident example.

These regional thematic linkages set the practice of Imao apart in the Philippine art community as something truly unique. Imao’s art represents a visual rendering of the Philippines’ place within the community of Southeast Asian art and characterizes an important aspect of the national artistic trajectory.

Luz distills figurations into their essential lines, shapes and forms, in effect becoming the pioneer of Philippine minimalism.

Transforming the acrobatic jugglers, circus performers, and cyclists of the perya or carnival he used to visit in his youth into blocks, circles, colors and lines, Luz shows he is a firm

His series of circus performers is representative of his abstract approach. The abstraction of the human figure is compared to the abstraction of the instruments, and in this sense we have a sensibility of music and fun that is surprising given the artist’s reserved  demeanor.

Alcuaz is a titan of Philippine visual art. Recognized for having influenced an entire generation of artists with a body of works that is critically lauded both here and abroad, Alcuaz has the soul of an artist, attaining the pinnacle of mainstream artistic achievement.

His complex and nuanced personality—the music lover, the bon vivant, the astute observer of the world around him—has cemented his legend as an artist without peer.

He has been recognized as an artist whose career spanned a multitude of subjects, forms and mediums—including painting, sculpture, monumental tapestries, ceramics.

Sansó embodies in his works the Expressionist branch of Philippine Modernism.

He has had a long and stellar career capped by a number of awards and recognition, including a King’s Cross of Isabella knighthood from the King of Spain, membership into the Order of Chevalier from the French government, and a Presidential Medal of Merit from the Republic of the Philippines.