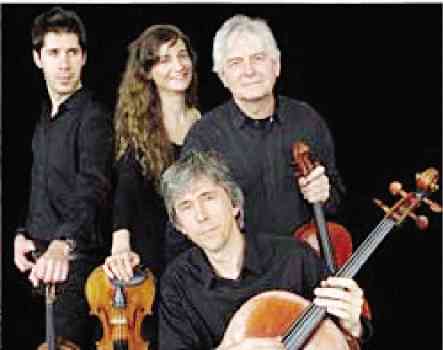 Manila to be treated to French music, cinema

Within the first decade of performing together, the group won in major competitions in Banff, Canada; Munich, Germany, and Evian, France. It has graced performance halls and arts festivals in Europe, East Asia, Africa, South America and the US.

To celebrate three decades in the industry, Parisii Quartet has embarked on an Asian tour, sharing with audiences their 18th-21st-century repertoire that includes the music of Haydn, Schumann and Beethoven, as well as French composers Debussy, Reynaldo Hahn and Regis Campo.

Concert tickets are at P500 for orchestra section and P400 for balcony, with 20-percent discount for AFM students and members, and groups of at least 20.

Hours before the Parisii String Quartet show, the latest edition of the French film festival will open with the 1 p.m. screening of “Une Autre Vie” (Lovers), directed by Emmanuel Mouret and starring Virginie Ledoyen (“The Beach,” “Farewell, My Queen”), Jasmine Trinca (“The Son’s Room”) and Joey Starr.

Romance is the recurring theme in this year’s lineup although it wasn’t intentional, said Martin Macalintal, audio-visual attaché of the Embassy of France in Manila.

More than love and romance, the selection of currently released films reflects contemporary French society, including the relationships of young couples in modern-day France, explained Macalintal.

The third day of the festival will have an all-Filipino lineup of films which have been screened at the Cannes International Film Festival. These are “Maynila: Sa Mga Kuko ng Liwanag” (1975); “On the Job” (2013); and “Norte: Hangganan ng Kasaysayan” (2013).

The events are presented by Alliance Française and the Embassy of France in Manila.