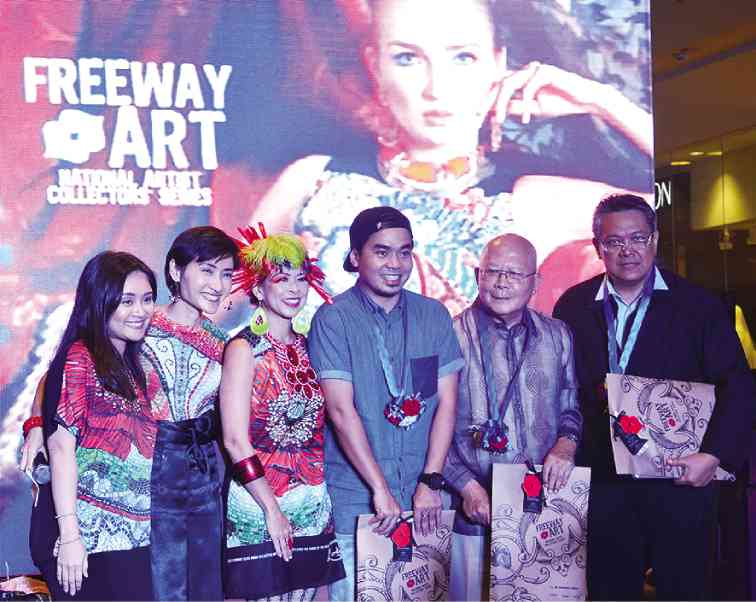 National Artist for Literature Bienvenido Lumbera is a believer in the Filipino language.

So much so that in keeping with his interest in popular culture, he has admitted to being a fan of Filipino rap music. Which is why the presence of Gloc-9 during the launch of Freeway’s 11th National Artist Collection Series featuring ladies’ wear with design inspirations from Lumbera’s famous works should not have come as a surprise.

Gloc-9 (Aristotle Pollisco), whose songs “Upuan,” “Sumayaw Ka,” and “Sayang” have won awards, would even tell of a time when he saw Lumbera lining up in one of his shows to buy a CD. Lumbera, one of the few living National Artists of the Philippines, was just like any of Gloc-9’s fans that day.

While the fashion launch event was, indeed, packed with those familiar with the rapper and his songs, the true star was undoubtedly Lumbera. His resumé includes well-received works in poetry, criticism (including the seminal “Tagalog Poetry,” which single-handedly founded Philippine Studies), and theater (as proven by his hit dramatic works such as “Tales of the Manuvu,” “Rama Hari,” “Nasa Puso ang Amerika,” “Bayan: Apat na Dulang Musika”).

Lumbera took up Philosophy and Letters at University of Santo Tomas and obtained his PhD in Comparative Literature at Indiana University.

In 1993, Lumbera was bestowed the Ramon Magsaysay Award for Journalism, Literature, and Creative Communication Arts. He was named National Artist for Literature in 2006.

But it was never easy for the Lipa, Batangas-born Lumbera. Barely a year old, he lost his father Timotheo to a freak accident while his mother Carmen died of cancer years later.

Lumbera expressed his gratitude for having been chosen to be part of Freeway’s ongoing campaign to promote nationalism through fashion. He encouraged those who were present to

spread the Filipino language, including its many colorful regional dialects.

Having his works inspire Freeway’s designs is just one way of doing that, Lumbera said, as the fashion collection would introduce his writing to a new generation of readers and writers.

“We were inspired by the warmth of his writing,” Elite Garments International CEO Sheree Roxas-Chua Gotuaco said. “He and his daughters were very easy to talk to and very makabayan. What amazed us about Tatay Bien was that he has a very open mind and that he has a wide appreciation of Philippine culture.”

Also present during the launch, which was hosted by Philippine Daily Inquirer’s Tessa Prieto-Valdes, was Philippine High School for the Arts director Vim Nadera, who highlighted Lumbera’s important achievements.

In keeping with its artistic and nationalistic theme, Freeway also presented the winners of its recent Art Bag Design Contest: Batok, by Elito Job Mirasol; and Tanglaw, by Felicidad Plata. Both are now available at Freeway stores nationwide.