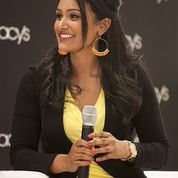 SAN FRANCISCO, California — Popular international retail brand Macy’s last May partnered with the Miss America Organization, hosting an appearance by reigning Miss America, Nina Davuluri, to express support for the diversity of the United States and bring awareness to the importance of embracing and taking pride in one’s culture.

“Miss America 2014 is a reflection of the changing fabric of American culture, which is ethnically diverse and culturally rich,” said Dineen Garcia, Macy’s vice president of Diversity Strategies.

“By partnering with Miss America nationally, Macy’s is not only celebrating Davuluri’s rich cultural heritage, but is also providing an empowering forum for women and young adults to learn about how Davuluri broke barriers and redefined the concept of the girl next door,” Garcia explained.

her ethnicity, she performed a traditional Bollywood dance for the talent portion of the pageant.

At the Macy’s event, Bollywood performances were also showcased in tribute of Davuluri’s efforts to raise interest in ethnic traditions.

Davuluri’s pageant performance and victory sparked controversy and scrutiny. “There was a bit of backlash after the pageant,” she noted.  “I created this project #circlesofunity so that people in the community and around the world could connect via social media.  I wanted to create a positive dialogue on cultural awareness.”

Davuluri added, “I also wanted people to be able to tweet me thoughts, pictures and videos of what they think it means to be culturally aware.  I wanted to get everyone engaged and when I check it, I see quite a few tweets in cultural clothing, dances, some funny videos about my win and interracial couples as well.”

In the Asian communities, specifically the Filipino community, embracing culture is shown in a variety of ways.  Participating in community events, such as concerts, program, and charity functions illustrates the strong pride of Filipinos both young and old.

Davuluri spoke of the importance of the younger generation accepting their heritage: “America is known as the melting pot of the world, especially representing a state like New York.  But I grew up with so many struggles, I suppose, in a sense that my parents were from India.  You must find a healthy balance and understand that assimilation has to happen from both sides so that you can stay true to your roots, heritage, and culture while simultaneously be an American.  I believe that’s the beauty of being in America.”

As Davuluri puts it, the image of “the girl next door is evolving.”  She, like many others, believed that certain jobs and roles had a stereotypical look.  For example, Miss America is often expected to be a blue eyed, blond haired girl.

She advises all genders, ages and racial groups, “Be yourselves because we all come from a different background, heritage culture, and tradition, which is easier said than done. Just know who you are and then stand up for who your are.”

Davuluri will continue her speaking tour after her reign ends in September, being already booked and slated to be on the road through March, using her title as a megaphone to spread the message of diversity and tolerance.