Yoga teaches kids to focus while having fun | Inquirer Lifestyle 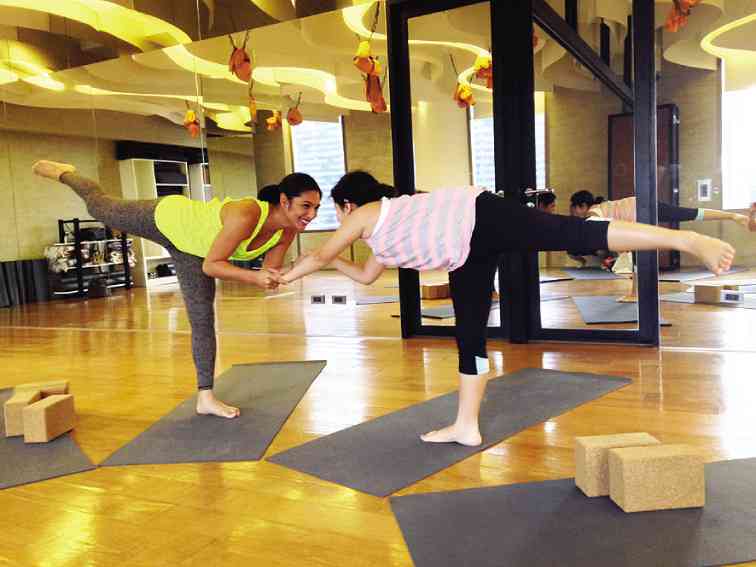 Yoga teaches kids to focus while having fun

We live in a harried world. Parents are popping in and out of their children’s lives, while children try to cope with absentee moms or dads, excessive shyness, school pressure, competitive peers, and overbearing classmates. This blitzkrieg of influences may appear trivial to adults, but oftentimes, to children, they are not.

Kids Yoga, a 45-minute class designed specifically for children, may help kiddies navigate life’s challenges a little better. It teaches the little ones, for example, to breathe deeply if they’re upset.

“We teach them how the breath affects how you feel. Bata pa lang, you’re training them to be calm, to not be too aggressive,” said the chirpy Bubbles Paraiso, model/actress turned certified yoga instructor for children.

Paraiso earned her certification to teach Kids Yoga from Yogi Beans New York associate director of programs Jessica Noe. Noe was in the country to give a series of workshops at Beyond Yoga.

There are many benefits children can reap from yoga. It can strengthen them physically, mentally, emotionally and psychologically. They develop better coordination, and become mindful of themselves and their surroundings. It also promotes flexibility, and helps them maintain it as they grow up.

While it’s true that all children are born naturally flexible, many lose their limber bodies when they hit school age and begin to spend long hours studying and sitting. That’s why it’s not unlikely to have children in gym class who can’t touch their toes.

“Just because they’re malikot doesn’t mean they get to stretch their muscles. My nephew just turned 9, and when I made him stretch, he was having a hard time. To think he plays football,” Paraiso said.

She said yoga also helps children focus, although she admits one of the biggest challenges she encounters so far is keeping the children still for a few minutes. But the self-confessed “child whisperer” has everything under control.

Paraiso has always loved children. One of her lifelong dreams since high school, in fact, was to become a preschool teacher or pediatrician. Her dream of becoming a doctor flew out the window when she discovered her fear of blood.

Teaching Kids Yoga is the closest she’s ever come to achieving her dream, and she’s having a grand time.

The 5’7”, 125-pound yogi keeps fit by practicing Muay Thai and lifting heavy weights; she can do an impressive 100-lb squat, and if you’re a gym rat, you know people judge you by how

heavy you can go with your squats. She’s also into Fight Form (caveman training), the Insanity workout, and gravity and Bikram yoga.

So it’s not surprising that she’s now in the wellness/fitness industry, joining the ranks of passionate instructors and trainers in the country. With her love for children—“I super love kids. I have this big smile when I’m teaching”—Paraiso has hit two birds with one stone.

‘Quiet as a mouse’

Kids Yoga is not exactly the same as yoga classes for adults. Sure, there are sun salutations, but the names have been changed so that children can relate to them easily. In this class you’ll hear of poses like “frog pose,” “bird on a wire,” or “quiet as a mouse” (instead of Child’s Pose).

Replacing the names of traditional yoga poses with that of an animal also keeps the child’s imagination working. After five to six poses, the class shifts to game mode. Each class includes two games, all centered around the poses they’ve learned.

“Everything is always new for kids; every day is a discovery. If they look at the sky they see a thousand and one things. It’s not about them having to perfect challenging positions. It’s about children having fun,” she said.

The energy of the class drops before it ends, as it moves toward mindfulness and meditation. This part teaches children to become attuned to their senses and bodies, and they learn valuable lessons, as well.

There is a large flower, for instance, that is passed around from one student to the other during Circle of Things. But before the flower leaves the hands of the child, the child will first

have to say the things she or he is thankful for.

It also teaches patience in children. In this age of instant gratification, a child’s limit will be put to test. The marshmallow test, for example, requires children to not eat the marshmallow set up in front of them until Paraiso gives the go signal.

“There’s this one kid who said, ‘You’re torturing me!’ So I replied, ‘I’m not torturing you. I’m teaching you patience,’” Paraiso said, smiling.

Kids Yoga is also a good opportunity for children to exercise their social behavior skills. It’s a good after-school activity for children, an alternative exercise for the child’s development.

Kids Yoga accepts children from 3 to 10 years old. Paraiso said that, in time, classes will be segmented according to age brackets. For now, however, all children will be in one class, with the class pace adjusted accordingly.