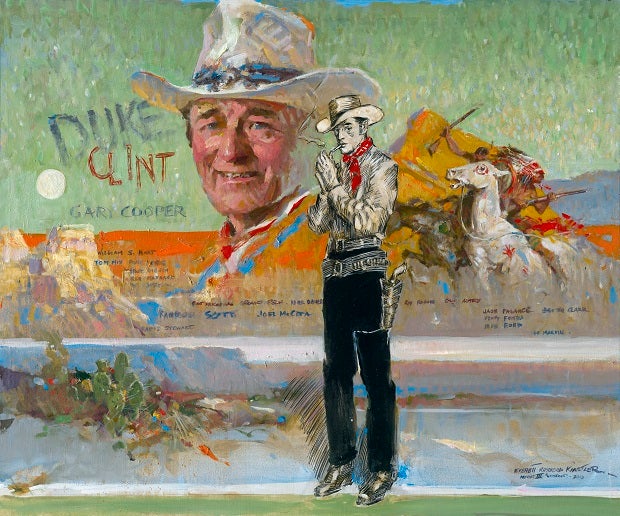 This photo provided by Amazon.com shows a 2011 oil painting on canvas by American portraitist Everett Raymond Kinstler depicting John Wayne surrounded by other western imagery. It is available for purchase on Amazon Art, an online marketplace launched last year offering over 60,000 original and limited edition artworks from some 300 galleries and dealers. AP

Now 24 of his portraits — 22 of which have never been offered for sale — are available for purchase on Amazon.

They include drawings, portraits and studies and two lithographs from the New York artist’s personal collection of Katharine Hepburn, James Cagney and other stars of the big screen.

“Kinstler & Hollywood,” a month-long exhibition of the 24 works is on view through July 7 at the Mountainsong Galleries in Carmel, California.

Some are signed by the subjects, including a pencil sketch of Hepburn priced at $30,000. A life-size oil portrait of the actress, who posed for Kinstler many times, hangs in the Smithsonian National Portrait Gallery.

Kinstler, whose work has also appeared at the Metropolitan Museum of Art, has many anecdotes about his subjects.

With Hepburn, he said, he didn’t have a clue how to interpret her.

“She was very much like the image of her in the movies: She was feisty, opinionated, difficult and an extraordinary person,” he said.

“I told her I’m not a salesman” — and that broke the ice, he said. “She said to me: ‘Of course you’re a salesman. I’m a salesman. What’s wrong with being a salesman?'”

All the works are available for purchase on Amazon Art, an online marketplace launched last year offering over 60,000 original and limited edition artworks from some 300 galleries and dealers.

The 87-year-old Kinstler said he decided to part with the works after asking himself “What will happen to these sketches and drawings when I won’t be around?”

They include one of Ronald Reagan, who is included in the Hollywood collection because of Reagan’s many years as an actor. The portrait is for sale for $80,000 and is an oil study from life of Reagan for his official 1990 White House portrait.

“These are pieces of American history,” said Stephanie Plunkett, chief curator at the Norman Rockwell Museum, which presented an exhibition of Kinstler’s works in 2012. “His portraits are very strong in the sense of personality of his sitters, and certainly in the likenesses. They also reflect important aspects of our American culture and history.”