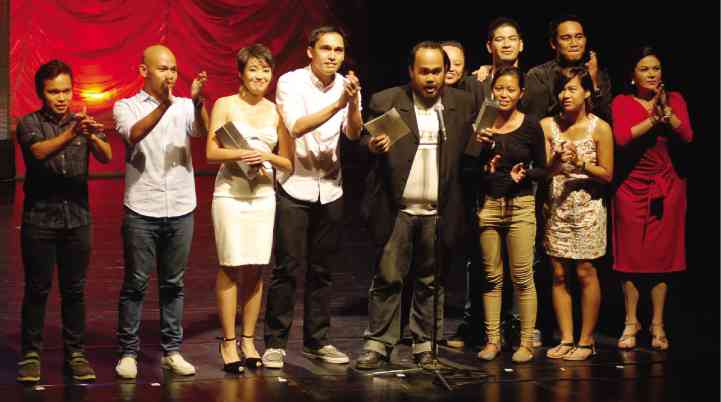 Ribbing, repartee and remembering at the 6th Gawad Buhay!

In his speech during the Philstage Gawad Buhay 2013 Awards held last week at the Cultural Center of the Philippines (CCP), Chris Millado, the artistic director of that institution, hailed the event as more of a “celebration” and “not a competition.”

It was apt description. The awards night was held to celebrate the many talents—actors, ballet dancers, directors, playwrights, writers, librettists, choreographers, designers, stage managers, etc.—who appeared in productions of the member-companies of The Philippine Legitimate Stage Artists Group, or Philstage, last year.

The talent present at the Tanghalang Aurelio Tolentino filled the venue nearly to the brim. As the awards night progressed, members of theater companies unabashedly cheered for their own once their names were read and their trophies awarded. And while stage people are legendary for their discipline, this was a time for them to let loose, in a manner of speaking, and applaud for their victorious theater peers.

Strictly speaking, the Gawad Buhay 2013 Awards was an event that represented but a portion of the performance community; the nominees and winners were only from Philstage productions. Among the major theater companies not yet in the Philstage roster are Atlantis Productions and New Voice Company. Stalwart university groups such as Dulaang UP and Tanghalang Ateneo are also excluded.

But the breadth of the membership and influence was already considerable; the productions in contention—and the talent involved in them—were some of the biggest last year, among them two nifty Shakespeare adaptations—Tanghalang Pilipino’s “Der Kaufmann” (The Merchant of Venice) and Peta’s “D’Wonder Twins of Boac” (Twelfth Night); as well as Trumpets’ original musical “The Bluebird of Happiness” and Repertory Philippines’ local staging of the Broadway blockbuster “The Producers.”

An independently constituted Philstage jury watched all these performances, came up with quarterly citations, and from them chose the nominees and eventually the winners. (See sidebar for complete list of winners.)

Presenter Ricci Chan cheekily noted that everybody knew everybody in the house that night, so “please huwag na mag-enumerate ng mga names. Enough na ang thank you sa staff, coactors, friends and family,” and no need to include the stage manager and nth stage hand, thank you.

Chan’s irreverent admonitions—“Don’t be boring. Keep your speeches short and sweet.  And please, jurors, please remember the alternates when you watch the plays”—set the tone for the evening, which saw presentors heartily ribbing each other and friends in the audience.

Karylle, who hosted the show with perennial partner Christian Bautista, quipped about how she and Bautista got passed over in the 2012 Ballet Philippines revival of “Rama, Hari.” Later on, Topper Fabregas piled on the mock exasperation by noting that he was the only major cast member from “The Producers” who wasn’t nominated. “I’m not sad,” he said. “I’m not happy either,” to cheers from the crowd.

The inside jokes, anecdotes and confessions kept the night on a good-natured keel, the sense of camaraderie palpable. Chan had the audience giggling when he expressed relief that Bart Guingona, who won the Male Lead Performance in a Play for his intense turn in Actor’s Actors Inc.’s “Red,” was engaged elsewhere and could not accept his award first-hand. Otherwise, Guingona would have broken the rule against long speeches, he said.

And when Audie Gemora, in full costume, casually revealed his son’s influence in his acceptance of the role of the flamboyant gay director in “The Producers,” many in the audience understood the context of that decision. The veteran actor, who has long been identified with family-friendly fare through his stewardship of the evangelistic theater company Trumpets, won for Male Featured Performance in a Musical.

Gemora and the ensemble of “The Producers” ensemble capped the evening’s performances with the riotous “Keep It Gay!” number from the Mel Brooks musical. The other musical excerpts were from nominated productions “Ibalong,” “Grease,” “Sandonesang Sapatos,” “The Bluebird of Happiness” and “D’Wonder Twins of Boac.” Against a bare stage complemented only by an LED screen, these performances were a collective testimony to the fact that, in the end, the performances, and the heart and spirit of the artists, are what make a show succeed.

Crame-Rogers, a legendary stage actress and educator, is best known for her role as Paula in the original production of Nick Joaquin’s “A Portrait of the Artist as Filipino,” opposite the late National Artist for Theater Daisy Hontiveros Avellana, who played Candida. Now in her 90s, Crame-Rogers was wheeled to the stage to receive her award, but otherwise delivered her speech in a strong voice, sans notes, and with admirable humility as she acknowledged the many mentors and fellow artists that she said had molded her throughout the years.

Villaruz, the second recipient of the Natatanging Gawad Buhay, is a choreographer, educator and dance critic who has at least 100 productions under his belt. His presentor, ballet luminary Nonoy Froilan, credited Mr. Villaruz as a mentor from the day he first “donned his first ballet shoes.”

The Bard writes that life is a stage. To the artists who trooped to CCP’s Little Theater last week, the stage is their life. The art of the theater lives both in their work and in the community they are continually building. With Gawad Buhay’s annual act of affirmation and remembering, the continuity of that art is hopefully assured.