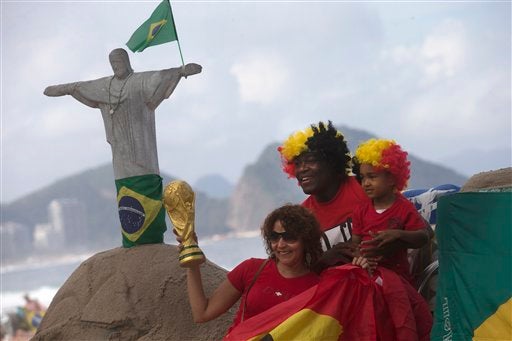 Soccer fans from Belgium pose for a photo with a replica of a World Cup trophy on Copacabana beach in Rio de Janeiro, Brazil, Wednesday, June 11, 2014. AP

RIO DE JANEIRO — Brazilian authorities have augmented the country’s long list of public holidays during the World Cup to let the football-loving country enjoy the tournament and also cut down on traffic problems.

Brazil is known for its generous number of public holidays.

There are nine national holidays every year, not an exceptionally large number. But it is supplemented by seven “optional” holidays granted at employers’ discretion.

Some of these apply to certain professions, such as Teachers’ Day, Commerce Day and Civil Servants’ Day in October.

Then there are the state and municipal holidays.

In Rio de Janeiro, whose citizens are known for their laid-back approach to life, there are three local holidays: Saint Sebastian Day, Saint George Day and Black Consciousness Day.

Other local holidays remember events such as the founding of towns, colonial massacres and a conflict known as the Ragamuffin War.

The World Cup has brought the phenomenon to a whole new level.

When Fifa demanded Brazil pass a wide-ranging “General Law of the Cup” regulating the organization of the tournament, Brazilian legislators used the occasion to add some more holidays in between provisions on trademark protection and special visas.

The law, passed in 2012 and widely criticized as too generous to Fifa, provides for an afternoon off every day that Brazil has a match, as well as a holiday for host cities every time they host a game.

Critics of the decision to spend a record $11 billion on the World Cup say the days off are just another way to hide the country’s overburdened transport systems and infrastructure problems.

Rio and Belo Horizonte in the southeast have three extra days off, the western city of Cuiaba and the capital Brasilia have four, Sao Paulo has six.

In Salvador in the northeast, the combination of weekends, national holidays, local holidays and match days means people will only have to show up at work for four full days during the three-week period from June 12 to July 2.

Many schools have also started their July vacations in June to let students take part in the World Cup party.