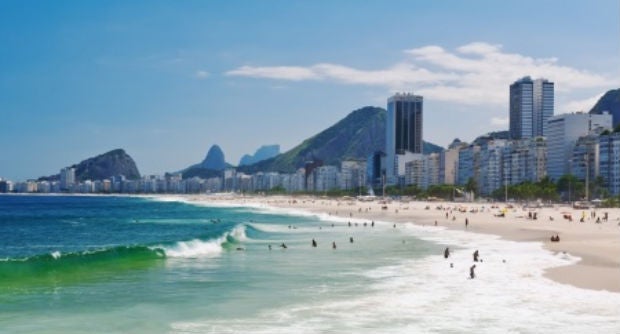 The rivalry between the two South American nations reaches fever pitch when it comes to football.

Argentines say Diego Maradona is the greatest of all time, Brazilians have Pele. This time, it’s Messi versus Neymar.

The contest could very well be settled with a potential clash of the titans at the July 13 final at the Maracana, a dream scenario for many fans.

“It took us three days to travel and we spent last night in tents on the beach,” he said near the Copacabana Palace hotel where one night costs $1,350 (1,000 euros) during the World Cup.

Roman and fellow Argentines prepared an Argentine “asado” barbecue between two cars with the renowned beef of their homeland.

Even beef, it seems, is a matter of competition.

“The meat here is no good. They don’t cut it well,” he said as the group drank a cola-based Argentine cocktail, though he hailed the “wonderful welcome” Brazilians have given them.

The makeshift Copacabana colony was bedecked in Argentina’s white-and-blue-striped flag, competing with Brazil’s yellow and green banners. Fans walked around in the Argentine team jersey.

One car, of course, flew a flag with the image of Maradona.

“This Argentine invasion doesn’t bother me as long as they don’t repeat the mess they made Saturday,” said Antonio Bordallo, a 34-year-old Rio designer.

That day, police used pepper spray to disperse throngs of Argentine fans who had blocked the avenue that lines the beach.

“The only advantage of having Argentines here is that I will be able to see their faces when they lose,” Bordallo said.

Argentina’s World Cup campaign started off well, however, with Lionel Messi scoring in a 2-1 victory over Bosnia at Rio’s historic Maracana stadium before an ebullient Argentine crowd.

Down the avenue, some rowdier Argentine fans shouted at passersby, asking people if they want to buy their football hats or jerseys because they were out of cash.

On the beach, Argentines mixed with visitors from other nations, posing for pictures with Greeks and Argentines on the water.

“People are nice and we are enjoying ourselves. Sex, alcohol and party!”

But Antonio Batista, a 64-year-old street vendor, was disappointed because he struggled to sell cookies and peanuts to the tourists.

“I’m not selling anything,” he said. “The fans are only buying caipirinhas.”