When Celia Diaz-Laurel bagged a ‘1’ from Fernando Amorsolo, and jousted in poetry with a suitor named Doy | Inquirer Lifestyle ❮ ❯ 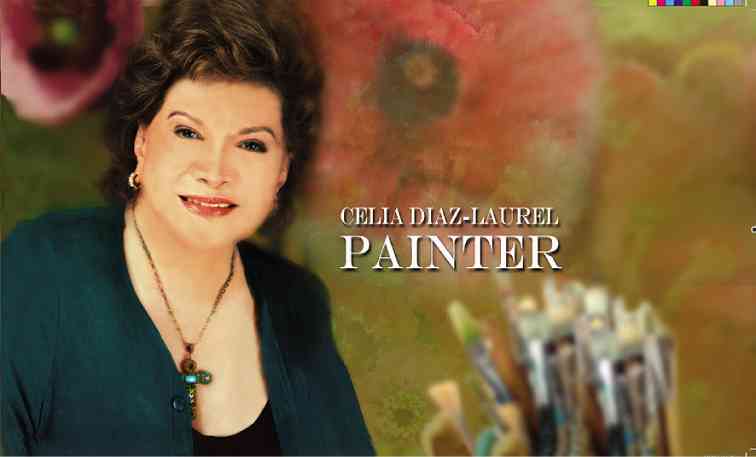 THE BOOK cover of “The Colors of My Life–Celia Diaz-Laurel, Painter” to be launched onWednesday

When Celia Diaz-Laurel bagged a ‘1’ from Fernando Amorsolo, and jousted in poetry with a suitor named Doy

At age 4, Celia Diaz picked up a box of colored chalk and began drawing circles on a blackboard.

As a fifth grader at the Assumption Convent, she unwittingly scandalized the mistress of class, Madame Gertrude, with “very sexy” and “voluptuous” drawings of Marie Antoinette and Cleopatra as she remembered seeing them in the movies.

The girl went on to discover how watercolor mixed with white glue created an emulsion more manageable for coloring pictures, not realizing that a commercial version called tempera was sold in stores.

World War II may have interrupted the young Celia’s academic life, but her artistic impulse lived on as she drew portraits of Clark Gable, Tyrone Power and Errol Flynn for classmates who missed going to the movies to see their idols.

Her recollections of how she flourished as a young artist are vividly remembered in the coffee table book, “The Colors of My Life—Celia Diaz-Laurel, Painter,” that will be launched by the UP College of Fine Arts Alumni Foundation at the Executive House of UP Diliman tomorrow, June 18.

UP president Alfredo Pascual will be the guest speaker. Artworks by Diaz-Laurel will be displayed during the event.

The book is the first of a trilogy. Now 86 years old, she is wasting no time writing the sequel that will focus on her work in the theater as actress and production designer.

The third book, she said, “will share the colors of the eight decades of a truly blessed life” that she has experienced so far.

“I am in the midst of writing my war memories, realizing that many of the generation(s) after us have no idea of what we went through during World War II,” she said in an e-mail to Inquirer Lifestyle.

She acknowledged the Japanese invaders’ deliberate attempt “to obliterate everything Western. As a result, Western history as well as literature—anything Western—were stricken out of our curriculum.”

Despite this restriction, the vacuum, as she called it, “was filled with studies on our own history and traditions.”

The Japanese occupation would always be remembered as a dark period in Philippine history, but she noted it was also a period when theater and stage shows blossomed since Western movies were banned.

“It was an awakening,” she noted. “A realization that we were indeed Filipinos (different from) the Americans we fancied ourselves to be from watching too many Hollywood movies.”

Her postwar development as an artist was not just about drawing.

As a freshman at the UP campus in Padre Faura, she was the ingénue who drew attention for having different skills. She wrote poetry (most famous of which was a conversation in poems with future husband Salvador “Doy” Laurel that appeared as an awaited series in the UP Collegian), starred in plays and bested the big boys on campus in an oratorical contest.

To think that she almost did not take up Fine Arts. Her high school literature teacher Mother Rosario (née Mary de Veyra) suggested she major in Literature at the University of Santo Tomas. Her friend Cecile Yulo, however, asserted before the nun that Diaz-Laurel would be better off taking Fine Arts because she was a “good painter” and because Amorsolo was the dean of the college in UP.

Her mother, the former Concepcion Franco, was impressed when she learned that Tolentino was also in the faculty.

Diaz-Laurel has fond memories of the two gentlemen artists. Tolentino, she said, also conducted an anatomy class and was insistent that students know “every bone, every muscle” in the human body.

“This was important not only for sculpture but for painting as well. Even a simple smile involved the movement of the muscle risorius,” she quoted the artist as saying.

Diaz-Laurel also remembered Tolentino as “loquacious as he was charming” and once held a grand demonstration of cooking spaghetti bolognese in front of an audience that included the young Pitoy Moreno and Bessie Kelly, mother of film legend Fernando Poe Jr.

Amorsolo, in turn, was always seated quietly at his desk, an amused smile “playing around his lips” as he overheard Tolentino tell his “lively perorations” in the faculty room. Diaz-Laurel surmised that Amorsolo had probably heard Tolentino’s stories many times before.

She also could not forget how Tolentino passionately defended Amorsolo from someone she only described as a “modernist painter fresh from his studies abroad.”

One vivid recollection was how Diaz-Laurel failed to purchase a proper canvas to capture the image of an orange fish for Amorsolo’s class. She did not have enough money for a canvas and had to settle for a Masonite board “so badly cut it looked more like a trapezoid instead of a rectangle.”

The student used the “wet-on-wet” technique to capture the freshness of the fish. An exhibit was held toward the end of the term and Amorsolo himself came to judge the works. Diaz-Laurel wanted to cover her face so badly when the great artist stopped to inspect her effort, and blamed herself for taking a Masonite board to work on.

Then, Amorsolo stuck something on her project. Classmates gathered around to see what it was when the artist left.

“Wow! He gave you a 1,” the kibitzers exclaimed.

Diaz-Laurel came from a generation of UP students that made an indelible mark on the fields they chose.

The ones a year ahead included dean of Philippine cartoonists Larry Alcala, while the older ones she saw on campus were Jose Joya, Napoleon Abueva, Ben Cabrera, Oscar Zalameda and Federico Aguilar Alcuaz.

Moreno acted as matchmaker to Laurel and Diaz, then as courier of the love letters that the couple sent to each other.

At the UP campus, Diaz-Laurel was popular and became the muse or “sweetheart” of the Upsilon Sigma Phi fraternity when her future husband was a neophyte. She recalled how he behaved audaciously, at one point calling her sweetheart to her face when they had barely been acquainted, in his attempt to woo her.

When her poem “The Porcelain Tragedy,” about a brokenhearted doll, saw print in the Collegian, he responded with his own verses in “The Unsuccessful Heartbreaker.”

This exchange caught the attention of the entire campus, with everyone eagerly awaiting the next installment in the university paper. At one point, a very impressed “terror” professor, Emilia Malabanan, urged Diaz-Laurel to transfer to the English department because of her written work.

After painting and poetry, Diaz-Laurel found herself dabbling in theater, though this was unplanned.

The playwright Guerrero saw Diaz-Laurel act out the part of “Lilay” in his play “Newer Years” on campus. When the actress who was to play “Tia Consuelo” in “Forever” walked out on the eve of premiere night, Guerrero offered the role to Diaz-Laurel.

Despite the lack of time and preparation, she accepted the challenge, noting Guerrero’s “liquid, bulging, pleading eyes” that made it hard for her to say “no.”

She also became his favorite leading lady for the rest of her stay in UP.

Diaz-Laurel’s exit from campus did not mean the end of her artistic endeavors. Many Filipinos would remember her as a stage actress. She had also written several books including “Days of Our Years: The Laurel Legacy—A Compilation of Selected Writings of Jose P. Laurel”; a mini-biography of Domingo Franco commemorating the 100th anniversary of the execution of the 13 Martyrs of Bagumbayan; and a coffee table book on the life of her husband Doy.

Looking back at the colorful story of the first installment of her trilogy, Diaz-Laurel agreed with sentiments that current concerns in the 21st century like global security jitters, peace and order and the environment should not distract people from culture and its life-saving graces.

She believes her and her colleagues survived the turmoil of their times “with the grace of God. And we emerged stronger as a generation.”

Culture at some point became a refuge. In many cases, focusing on this also became necessary for coping and survival.

“We should never forget culture. It is the heart and soul of a nation,” she stressed.