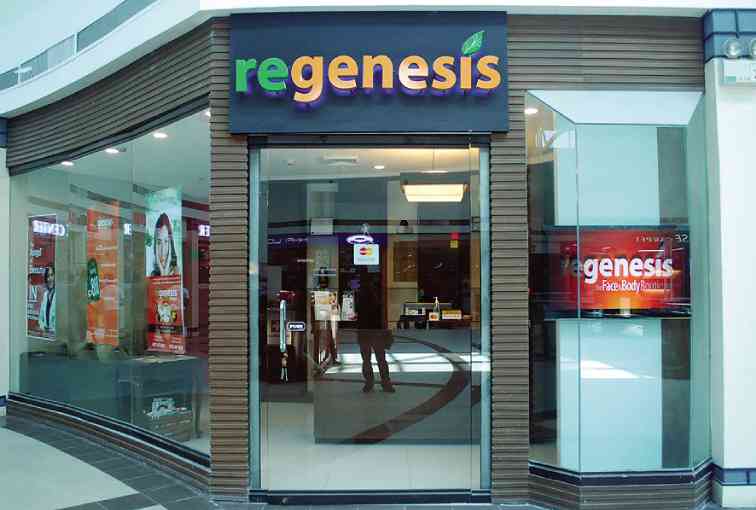 THE REGENESIS clinic at Festival Mall in Alabang. PHOTOS BY ARNOLD ALMACEN

Invasive beauty procedures are unlikely to fade from the scene anytime soon. But growing advances in regenerative medicine are giving doctors like Angela Gomez more options to offer patients in search of more subtle and natural ways to look and feel younger and thinner.

“Regenerative medicine isn’t really that new, but a growing number of doctors are going into this direction,” said Gomez, who owns and manages two beauty clinics aptly named Regenesis. “Regeneration involves stimulating new cells to grow, while at the same time helping damaged cells repair themselves.”

Silicone, for instance, wasn’t just a preferred material for breast implants during our grandmothers’ time. Decades ago, some doctors used the synthetic filler to deal with deep creases and laugh lines. It seemed to work well at first until doctors learned that silicone, once injected in the body, is permanent.

“If you had your face injected with silicone in your 40s, that silicone could slide or move somewhere else in your 60s and 70s once, say, osteoporosis sets in,” said Gomez. “Even without osteoporosis, a person’s bone structure changes as she ages. That’s why the direction these days is moving toward more natural procedures anchored on regeneration.”

Aging, after all, is also a process. You can’t undo wrinkles and sunspots accumulated over 20 years in just one day. Repairing and stimulating your cells to make you look younger will also take time.

“It’s just a matter of stimulating the right cells,” said Gomez. “You don’t stimulate blindly in the hope that every cell in your body would do the things you specifically want. It doesn’t work that way. Your doctor should know what ails you.”

At Regenesis (its clinics are at Festival Mall, Alabang and Metrowalk, Pasig), Gomez resorts to a number of lunchtime procedures to get the job done, from autologous platelet rich plasma (PRP) injections on the face, to cell therapy involving cell extracts taken from sheep and rabbit fetuses formulated in Switzerland.

PRP injections have been around. It involves getting the patient’s blood and processing it. Once the blood is processed, only its growth factors are later injected back to the patient’s anesthetized face.

“Many people call it stem cell, but the description has been so abused,” said Gomez. “For me, PRP is just a form of regenerative treatment using cells taken from your own body.”

But PRP has its limitations. No matter how much growth factors you extract from, say, a 70-year-old patient’s blood, you would still end up with stem cells that are as old as the patient.

“That’s why no single treatment can be considered superior over others,” said Gomez. “It’s a case-by-case basis depending on the person’s needs, age and lifestyle.”

That’s where cell extracts from sheep and rabbit fetuses come in. An elderly patient may derive little from PRP, but could benefit a great deal from various cell therapies pioneered and developed by the Swiss.

The cell-specific treatments, which come in frozen form, are thawed and injected intravenously or applied topically. Some, like “vegetal placenta” supplements stuffed in soft gel capsules, can be taken orally.

In contrast, cell extracts in a liquid base can be used topically because these extracts are small enough to penetrate the skin’s pores.

“Taking cell extracts is not a cure-all,” she added. “There’s also no pill or injection that can reverse the aging process. There’s no pharmacologic medicine to do that. The best way we can deal with it without going under the knife is to repair and hasten the production of new cells through cell-specific therapy.”

As the exclusive distributor in the Philippines of Swiss-made MFIII and MyoPep (a muscle-building peptide therapy designed to decrease fat buildup and contour the body), Gomez regularly flies to Switzerland to train and keep abreast of developments.

Through MyoPep, for instance, Regenesis offers plus-sized clients a noninvasive option to weight loss other than mesolipo. A Swiss pharmaceutical company has been able to isolate peptides, the building blocks of protein, and inhibit an enzyme called myostatin from doing its work.

“Myostatins are responsible for stopping further muscle buildup in our bodies,” said Gomez. “This is necessary so we wouldn’t bulk up like Arnold Schwarzenegger after doing everyday tasks like walking.”

As a myostatin inhibitor, MyoPep temporarily “stops myostatin from stopping muscle buildup,” she explained. As a result, an overweight or obese person’s muscle mass increases while her fat deposits decrease.

“Even diabetics could benefit from this therapy because it could help them process sugar better,” said Gomez. “Exercising isn’t discouraged. In fact, it is better if you supplement the therapy with regular light to moderate exercises.”

MyoPep has also no known side effects since the therapy is composed of peptides, which are small, natural components that make up proteins found in the body, she added.

After graduating from the University of Santo Tomas, Gomez first specialized as a pediatrician. She later took additional training in aesthetic medicine after encountering numerous cases of skin problems among her young patients.

She now divides her time between pediatric and aesthetic medicine. While her approach to children’s skin diseases is clinical, she limits it to purely aesthetics when dealing with adults.

“I love dealing with kids and their various health issues,” said the mother of three, who also practices pediatrics at Parañaque Doctors’ Hospital and Asian Hospital and Medical Center. “But at Regenesis, I deal with all sorts of people with problems and issues regarding their looks.”