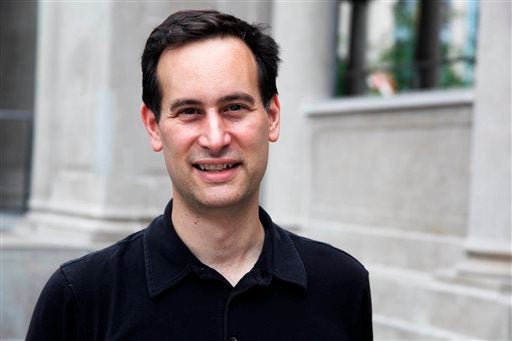 This undated photo provided by Scholastic shows author, David Levithan, posing for a photo in New York City. Levithan last year marked the 10th anniversary of his "Boy Meets Boy," a romantic teen comedy where the homecoming queen was once a guy and the gay-straight alliance was aimed at helping the straight kids learn how to dance. Levithan, also publisher and editorial director at Scholastic, offers his insights into parenting and books on LGBTQ-related themes for young people during an interview with Associated Press. AP

Writer David Levithan on LGBT books for the young

NEW YORK — Writer David Levithan last year marked the 10th anniversary of his “Boy Meets Boy,” a romantic teen comedy where the homecoming queen was once a guy and the gay-straight alliance was aimed at helping the straight kids learn how to dance.

And there was Paul, who meets Noah.

Since then, there’s been a burst of books featuring lesbian, gay, bisexual, transgender or questioning young people.

Levithan, also publisher and editorial director at Scholastic, offered his insights into parenting and books on LGBTQ-related themes for young people in an interview with The Associated Press.

AP: How does a parent who isn’t involved in the LGBTQ community but would like to foster an awareness and tolerance in children go about doing that through books, and at what age does that process begin?

Levithan: It’s never too early to foster kindness and equal treatment, for whatever group. So much of the pain that LGBT kids go through is because they feel distanced from all of the narratives they’ve been given. They’ve been told that everyone grows up a certain way, and now their own way is diverging from that.

The best thing parents can do, whether their kids end up queer or straight, is to acknowledge all of the different options that are out there, and letting their kids know that they support them no matter which options end up being theirs.

Books are a wonderful signifier and a perfect conversation starter. With my novel ‘Boy Meets Boy,’ I’ve seen it work both ways: I’ve had kids who’ve left their copies around for parents to find, as a way of ‘coming out’ to them. And I’ve had parents who’ve left their copies around for kids to find, so the kids would know they were supported and loved.

AP: Your fellow writer John Green said a Hollywood producer once told him: ‘The only thing audiences hate more than smart teenagers are gay teenagers.’ Does that extend to books for kids and teens today?

Levithan: That producer would be laughed out of one of my editorial meetings, for certain. Readers embrace all kinds of characters, as long as they are written with emotional truth.

Ten years ago, there may have been some hesitation on some people’s part. But it’s a different world now, and the best-seller list is full of novels with well-developed gay characters — not just in gay-themed novels like ‘Will Grayson, Will Grayson’ (co-written by Green and Levithan) but in works by best-selling authors like Cassandra Claire, Maggie Stiefvater and Ellen Hopkins, where the queer characters are part of the multifaceted worlds they are creating or reflecting.

AP: Are LGBTQ kids and teens fairly represented in books for those age groups? Are there enough stories where LGBTQ themes are taken on but also books that just happen to include such characters but are not about that experience?

The important thing is for the characters to feel real, and to be given the humanity they are due. That granting of humanity is what separates a full portrait from a stereotype.

I think it’s dangerous to talk about ‘Oh, that character just happens to be gay’ as some kind of goal for us and our literature. The important thing is to show as much of the spectrum as possible, and to continue to investigate it.

The Daily Show with David Levithan