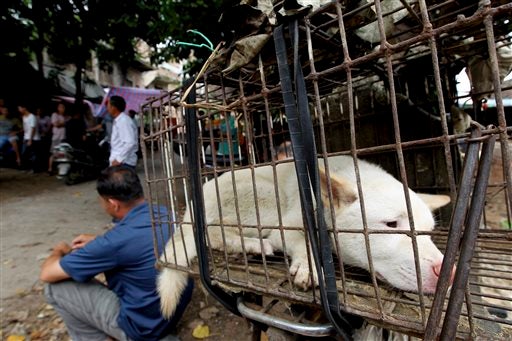 In this June 23, 2013 file photo released by the Human Society International, a dog waits to be sold for meat in a market in Yulin, in southern China's Guangxi Zhuang Autonomous Region. Residents in the southern Chinese city that's come under fire for an annual summer solstice festival in which thousands of dogs are slaughtered for food have held their feasts early to avoid attention. AP

BEIJING — Residents in a southern Chinese city that has come under fire for an annual summer solstice festival in which thousands of dogs are slaughtered for food have held their feasts early to avoid attention.

Some residents of Yulin started gathering last weekend and eating dog meat and lychees to celebrate the longest day of the year, ahead of Saturday’s actual solstice, state media reported this week. The residents wanted to avoid protests by animal rights activists.

In recent years, the festival has been targeted by activists who have drummed up public awareness of the event with posts on social media and online petitions, and descended on the city to protest outside slaughterhouses or markets where the dogs are sold.

The public uproar reflects the increasing affluence of ordinary Chinese, who keep pets, travel overseas and are changing attitudes toward traditions they may not have questioned before.

Photos on state media showed groups of Yulin city residents tucking into plates of meat and vegetables around dining tables strewn with lychees. Other photos, which circulated widely on Chinese microblogs, were of skinned, cooked dogs hanging from hooks at street stalls or piled on tables.

Under the Yulin tradition, eating dog and lychee and drinking liquor on the solstice is supposed to make people stay healthy during winter. It is unclear if the supposed health benefits diminish if the feast occurs before the actual solstice.

Animal rights activists say the event is a public health risk because the dogs undergo no quarantine to ensure they are free of disease, and that they are strays grabbed off streets around

the country, as well as allegedly stolen from pet owners. The dogs are often poisoned with toxic chemicals that could be harmful to humans, they say.

Deng Yidan, an activist with Animals Asia, said the public backlash hurts the image of Yulin and China.

“Negative coverage is growing — dog theft, criminal activities, food hygiene issues, and rabies fears — not to mention the division in society between those for and against the festival — together these have brought significantly more negative publicity to Yulin than economic benefits,” Deng said in a statement.

The Yulin government has sought to distance itself from the feasting, saying it is not officially endorsed. State media reports say the government told restaurants to remove references to dog meat from their menus and signboards — though it did not bar the sale and consumption of the meat, which is not illegal in China.

The government has denied the formal existence of such a festival, saying it is a culinary habit practiced only by some businesses and people.

Public pressure stopped another dog meat festival, in eastern Zhejiang province, which was canceled in 2011 despite dating back hundreds of years.