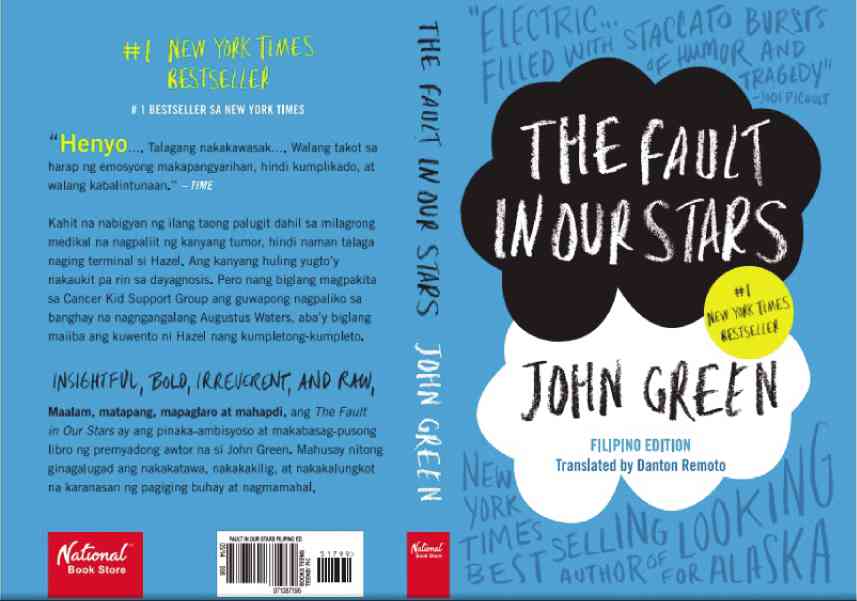 Eight questions for ‘The Fault in Our Stars’ translator Danton Remoto 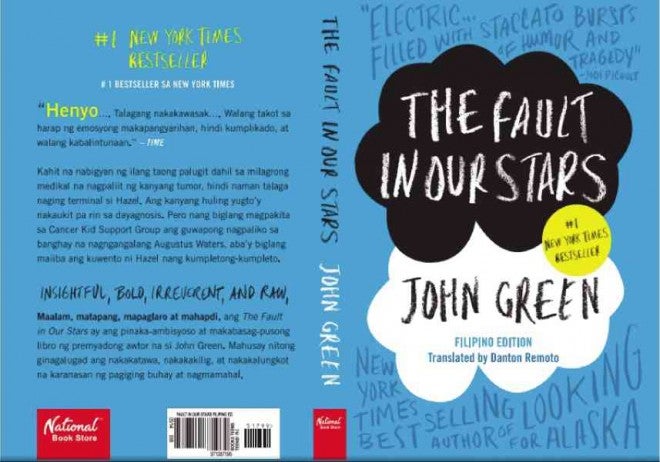 Danton, who was Xandra’s teacher at the Ateneo de Manila University, has published 10 books in English and Filipino, is the head of TV5’s news research, and the producer of the radio show “Remoto Control.”

Inquirer Super asked him eight questions about his translation work on TFIOS.

Were you familiar with John Green and his work before National Book Store approached you to work on the translation?

I was attending the launch of “Manila Noir” at Greenbelt when Xandra Ramos asked me if I could translate TFIOS. I told her, “Could I read the book first?” I haven’t read any of John Green’s novels, although I am aware of the buzz they have created.

When did you first read the book and how did you feel about it?

I read it and wolfed it down; I finished reading in two days. I liked it because it is not a cheesy novel. John Green knows how to create characters that seem to breathe in front of you. His prose—and this is what my bashers should know, if only they read John Green in English—can be difficult. It is composed of long sentences and lyrical flights, especially when he is writing about love and its wreckages. This is a philosophical novel, with allusions to Greek writers, with lines from Shakespeare, all the way to the modern master of 20th century poetry, T. S. Eliot. The challenge was how to translate these masters of the language—these great poets—into readable Filipino.

And since I never shy away from challenges—look, I sued Comelec in the Supreme Court when it turned down Ladlad in the 2010 elections—I said yes to Xandra.

Did your knowledge about the book and the author’s huge fan base add extra pressure on you?

I do not know Green and his huge fan base, and even if I do, it would never have intimidated me. I have written 10 books in English and Filipino. I taught Filipino at the Ateneo for four years. I have won awards for my poems in Filipino. I am not saying this to boast, but to say that I have been trained to write in both English and Filipino. I consulted at least two dictionaries when John Green’s sentence constructions and syntax stumped me.

How is the Tagalog version doing so far?

The Filipino version is selling 500 copies a week. So, in its third week, it should have sold 1,500 copies. In the Philippines, selling 1,000 copies of your work in one year already makes it a bestseller. We sold that in two weeks!

What are the most memorable things people have said about it?

Some people said my translation is difficult to read and so early 19th century. Others said, why did I use Taglish in some dialogues? It’s a mixed bag. I used Taglish in some dialogues because that is the way teenagers speak. I used lyrical Tagalog in some prose passages because that is the way John Green wrote. Green is not some silly romance writer. This guy is a master of the plot-driven narrative, and, boy oh boy, he could twirl you around his little finger when he begins writing about relationships—be they platonic or romantic.

Is it true a second printing is already in the works?

I think a second printing is in the works, if this amazing trend continues. The book is flying off the shelves of National Bookstore. Even the salesgirls at the store buy… They want their own copies. I met security guards in Loyola Heights who bought the translation, and read it during their night watch. I am happy that ordinary people are reading the book. It was not written for purists in the academe, or for some bashers with IQs below sea level, who comment irresponsibly because they are anonymous.

What did you think about the movie?

I finally saw the movie last Saturday and it is phlegmatic compared to the book. It missed some scenes that would have sharpened the novel’s poignancy—and the comedy, for this is a funny book, too.

Who is your favorite “Fault” character?

My favorite is Hazel Grace Lancaster, that bright and beautiful and brave girl. She is courageous in the face of such pain, telling the nurse her pain is a nine when it should have been a 10.

“The Fault In Our Stars” is available at National Book Store. Danton Remoto’s forthcoming books include “a novel, a collection of short stories, a collection of poems and a sheaf of essays.”