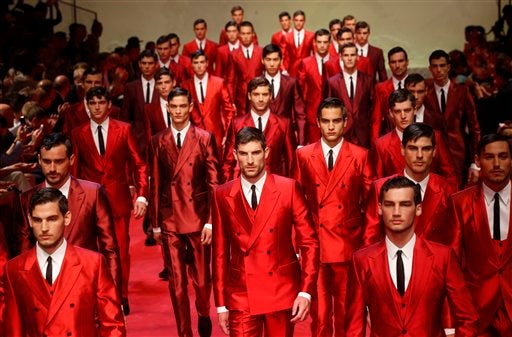 MILAN — It’s no time to be shy about color, men.

Since a group of butterflies is a flutter, it seems only fair to call a parade of Dolce&Gabbana models in tailored crimson suits a flourish.

The designing pair have departed, if briefly, from their fabled Sicily for Spain’s bullfighting country to gather inspiration for next summer’s looks. Still, their matador jackets embellished with swirls of lace, rutsched ribbon and velvet lapels offer the sort of baroque elements that often underpin Dolce&Gabbana style. Instead of traditional gold, these new accents are black. The jackets are worn with cropped trousers and slippers.

The designers offer a new version of their boxy top, often worn with skinny trousers, this one with pictures of charging bulls. Worn around the neck to accompany this fierce image is a delicate rosary, suggesting either the fervor it must take to enter an arena with a raging bull or gratitude for having survived.

The designers have incorporated decorations from the matador costumes into more urban suits, with swirls of ribbon and piping, worn with skinny ties. Shoes range from fuzzy sandals to high-top sneakers.

They distill these elements into a series of shiny three-piece suits with coop-neck gilets and skinny ties in a series of colors: cornflower blue, evergreen, emerald, purple and salmon pink — all giving way to a finale of crimson red.

This was a serious collection, heavy on ornament and light on beach wear. Unless you count a big boxer short worn with an oversized boxer’s belt.

When the announcement went out that Christian Pellizzari would be making his Milan runway debut at Giorgio Armani’s theater, the designer remarked that “it was like a bomb exploded.”

The 33-year-old native of Treviso, near Venice, has taken cues both from the disciplined sartorial brand Tonello, where he honed the skills of an Italian craftsman, and from the extravagance of Vionnet’s Paris couture, where he later worked.

Pellizzari’s looks seek to balance those two extremes. His tailoring gives a serious fashion underpinning to such extravagances as embroidered accents and sequined peonies. The designer says his goal is to create clothes that his friends back home would wear, not just fashionistas. So he combines cropped jacquard trousers with casual lace-sleeved cotton tops.

A jacket embroidered with a peony “could be worn at the beach with a pair of shorts,” he said backstage.

He called the looks American Gigolo and heralded the free spirit by sending models down the artificial turf runway in their bare feet, tassels dangling around their ankles in a tribal touch.

Pellizzari is the latest up-and-coming designer selected by Armani to preview their collections at his theater. It’s part of Milan’s efforts to inject fresh energy into fashion weeks.