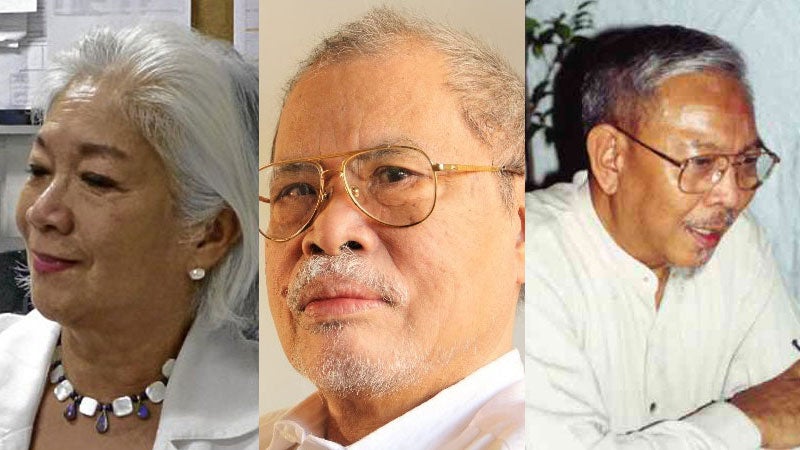 Malacañang released the list of the new National Artists late Friday night but one name was conspicuously missing.

Actress-producer Nora Aunor was dropped from the lineup composed of six artists that was originally submitted by the joint boards of the Cultural Center of the Philippines (CCP) and the National Commission for Culture and the Arts (NCCA) to Malacañang for possible proclamation as National Artists.

President Benigno Aquino III has named modern composer Ramon Santos as the new National Artist for Music, five years after then President Gloria Macapagal-Arroyo dropped him from the list in a controversy that reached the Supreme Court.

The last two would be conferred the Order of National Artist posthumously.

Bautista, a Palanca Hall of Famer who won first prize in epic writing in a national competition marking the country’s centennial in 1998, is the new National Artist for Literature.

Reyes, founder of Ballet Philippines, which brought recognition to Filipino dancers as part of the country’s cultural heritage, is the new National Artist for Dance.

The other new National Artist for Music is Feliciano, one of the most prolific and recognized Filipino composers.

Feliciano’s vast work included operas and music dramas and other compositions such as the prize-winning “Pokpok Alimpako,” a favorite piece of choirs competing abroad, among many others. In 1977, he was awarded the John D. Rockefeller III Award in Music Composition.

Posthumously named National Artist for Visual Arts was Coching, regarded as one of the pillars of Philippine comics while National Artist for Architecture, Design and Allied Arts was  Zaragoza, a pillar of modern architecture known for his works such as  Sto. Domingo Church, Casino Español and  Meralco Center.

The President has issued proclamations naming them National Artists in their respective fields.

“The President will confer the Order of the National Artist in an appropriate ceremony,” Communications Secretary Herminio Coloma said.

In 2009, Arroyo dropped Santos from the roster of National Artists elected by the joint board of the CCP and the NCCA.

The conferment had to wait after several artists questioned Arroyo’s proclamation in the Supreme Court in 2009.

National Artists Bienvenido Lumbera, Virgilio Almario, Napoleon Abueva and Arturo Luz, among others, challenged this before the Supreme Court, and got a favorable ruling in July 2013.

The high court ruled that Arroyo committed grave abuse of discretion and voided the proclamations of Alvarez, Caparas, Mañosa and Moreno as National Artists.

Santos was nominated again for the honor.

Santos is a known scholar on Southeast Asian artistic traditions, including traditional music of the Philippines such as that of the Yakan, Boholano, Bontoc and Ibaloi.

Malacañang, however, said it was not certain whether Aunor was part of the list of nominees submitted by the CCP and the NCCA to the President.

“I have no information on that. I was just given that announcement last night,” Coloma said on the phone, reacting to reports that Malacañang snubbed Aunor. He suggested that the media check this with either the CCP or the NCCA.

The CCP and the NCCA chairs preside over the final deliberation, which is attended by all board members and past National Artists. The joint board then submits the nominees to the Office of the President for the Chief Executive’s signature.

Coloma said, however, that a 2013 ruling by the Supreme Court on a case filed against then President Arroyo’s controversial proclamation of some National Artists recognized the President’s power to proclaim all, or none of the recommendees, without having to justify his or her action.

“The President has the prerogative to approve all or none, without needing to explain,” he said.

Coloma released to the press the list of the new National Artists late Friday night.

The proclamation did not surprise Emily Abrera, chair of the CCP board, who told the Inquirer on the phone yesterday that she was “informed about the final decision” late Friday.

The usual process was for the Office of the President to send a memorandum on the proclamation to the CCP or the NCCA, which will then make the announcement.

In this case, the Office of the President went straight to the media, and the proclamation was first made on Solar News and the government station PTV 4.

As late as 5:30 p.m. on Friday, before the end of the work week, the CCP called up the Office of the President to follow up on the proclamation, but at that time it was not yet available.

The announcement was eventually made at 10 p.m. on Friday.

“Perhaps the news came directly from Malacañang because of the questions and inquiries from different quarters,” Abrera said.

Abrera stood by the President’s decision. “He makes his own decisions. He is an independent thinker. The President looked at all the points of view. This issue shows that we have a leader who will not be swayed by popular sentiment.”

Abrera agreed with Coloma that the President “doesn’t have to explain anything.”

As expected, Aunor’s fans and colleagues were up in arms over the snub.

“They did not snub Ate Guy (Aunor’s nickname) … they ignored the cultural expression she represents, that of the downtrodden masses,” said filmmaker Joel Lamangan, who gave Aunor her best actress award in Cairo International Film Festival for “The Flor Contemplacion Story” in 1995.

Lamangan addressed the rumor that Aunor was denied the honor because of past controversies—from her tax woes in the 1980s to a drug case in the United States that was eventually stricken off the record in 2007.

“Morality is not part of the criteria; it’s the body of work that matters,” Lamangan said. “Not whom an artist sleeps with. Not what he or she smokes or drinks. What should be considered is the uniqueness and excellence of an artist’s works.”

“I am disappointed, but I am not surprised,” said filmmaker Jose Javier Reyes, who was part of the first deliberation of the panel of experts (which nominated Aunor as National Artist). “I thought we were choosing a National Artist, not a saint.”

“I hope the Aunor snub was not politically motivated because it would open a can of worms,” he said.

Veteran filmmaker Gil Portes, who handled Aunor in two acclaimed films (1984’s “’Merika” and 1990’s “Andrea, Paano Ba Ang Maging Isang Ina?”), said: “What about the other National Artists whose lives were not exactly ‘lily-white,’ shall we proclaim them unfit of the honor as well?”

“We seek people whom we can hold up, who can pass the scrutiny of the artistic community and the public at large,” she said.

She said being gay was not an issue and neither was being an alcoholic.

“I can assure you that we have liberal minds in the boards of both the NCCA and the CCP and among the past National Artists,” Abrera said.

“No, I don’t think political affiliation was an issue in this case, either,” she added.