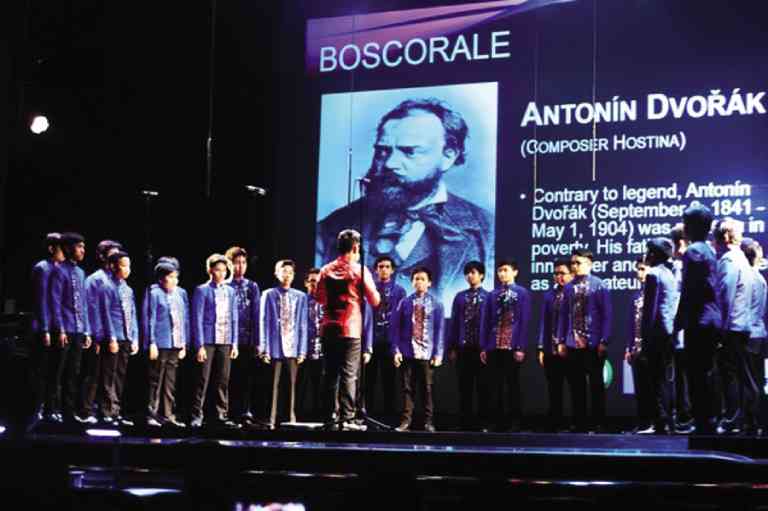 Farewell concerts, a ghostly musical and an EU choral fest

The music director of the Philippine Philharmonic Orchestra (PPO), Olivier Ochanine, closed the 2013-14 season at the Cultural Center of the Philippines with a heavyweight composition, the famous “Alsa Sprach Zarathusra” (think “2001: Space Odyssey”), complemented by a slew of lightweights like the “William Tell” Overture (think “Lone Ranger”) and music from iconic movies like “The Magnificent Seven” and “Star Wars.”

And Ochanine was in his element, prancing about, more energetic than usual, picking up the mike and annotating the pieces to be played, communicating with the crowd in what turned out to be a delightful evening.

The PPO 2014-15 season resumes in September, and the personable French-American conductor will be wielding the baton for the next three years.

“Ghost: The Musical” (Atlantis Productions at the RCBC Plaza’s Romulo Auditorium) was a fast-paced production directed by Bobby Garcia with flourish.

A stage version of the cult film starring the late Patrick Swayze, Demi Moore and Whoopi Goldberg, the show was often funny, at times moving and enhanced by special effects, strong visuals, effective lighting and snappy choreography, with precision dancing by the ensemble.

Christian Bautista and Cris Villonco threw themselves into their roles with gusto, as did Hans Eckstein as the villain and Ima Castro as the befuddled medium, who almost ran away with the show because of her kinetic performance.

Tenor Al Gatmaitan, opera singer and theater actor, is in demand as much for his singing and acting ability as for his hunky good looks. Once, in a Peta play, he bared his torso and his female fans screamed.

A mainstay of soprano Karla Gutierrez’s Philippine Opera Company (POC) for the past seven years, Gatmaitan, who a few years ago took up bel canto singing in Rome, has just left for New York to pursue further studies in New York University’s Steinhardt School for Music and Performing Arts Professions.

To raise funds, friends, family, colleagues and mentors staged a rousing concert for him billed “In Pursuit of a Dream.” This was held first at Opera Haus and then at LRI Design Plaza, both in Makati City. It was a glorious evening of operatic arias, Broadway favorites, kundiman and selected OPM.

The likeable Gatmaitan was visibly moved (in fact, he was trembling) by the outpouring of love for him.

The sultry Diño did two flamenco numbers, the second accompanied by the besotted Suguerra, who described her as “may-ari ng puso ko” (my heart’s desire).

Twenty-four choirs around Luzon participated in the sixth Musica FEUropa, the only choral competition in the country sponsored by the European Union.

Formerly a showcase only for choirs in the University Belt, the competition now features high school, college, university, church- and community-based choirs.

It was an “all-star battle” at the Far Eastern University Auditorium, one fan observed, as champions from previous years tried to regain their crown. The grand prize (1,000 euros) eventually went to University of the Philippines at Los Baños (UPLB) Chorale.

In the High School Category, the winner was the all-male Boscorale from Don Bosco Academy, which regained their title after two years and brought home the prize money of P25, 000.