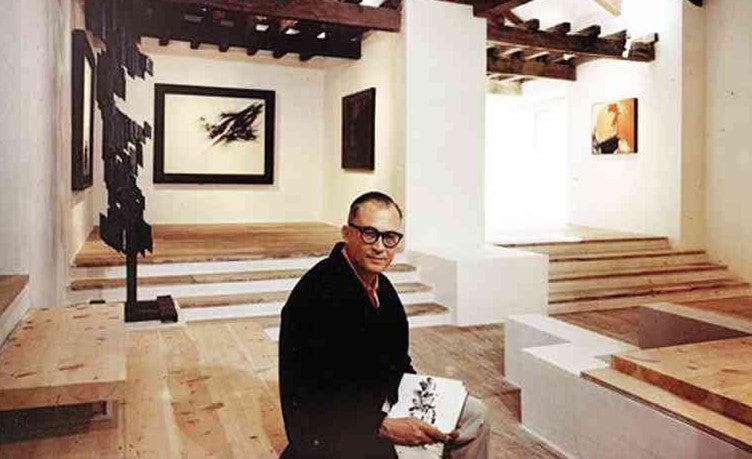 THE MASTER artist in 1966, in Museo de Arte Abstracto Español at Casa Colgadas in the ancient hill town of Cuenca. PHOTOS COURTESY OF AYALA MUSEUM

Exhibit to uncover the mystique of Fernando Zóbel

Fernando Zóbel, one of our pioneer abstractionists and a master of wispy form and subtle monochrome, has acquired a certain mystique.

Although there is a permanent display of his representative artworks on the third floor of Ayala Museum, many of even his ardent admirers still have questions about the man and his art: What really is his nationality? From where did he get his singular style and technique? How did he become an artist? What was his day job?

Some of these questions will be answered with the opening of the exhibit “Journey into Space: The Visual Odyssey of Fernando Zobél” on June 30 in the Third Floor Galleries of Ayala Museum, Makati Ave. cor De la Rosa St., Makati City.

The grand exhibition comprises his life’s work from the 1950s through the early ’80s, from paintings to drawings, prints, photographs.

Born in Ermita, Manila, on Aug. 27, 1924, to an industrialist father and an aristocrat mother, Zóbel fled the Spanish Civil War with his family and settled in the Philippines in 1936, where in a few years they were caught by the Pacific War.

Zóbel had pushed for the foundation of Ayala Museum in the late ’60s. When that didn’t push though, and as he was then emigrating to Spain, he donated his collection of Filipino modernist art to Ateneo University, where he had taught for some years. The donated artworks formed the core of the Ateneo Art Gallery Collection.

He was acknowledged as one of the Spanish modernists, “leading a group of young artists who were avowed enemies of corsi (cheap, pretentious, heavily pompous kitsch).” With some friends, he established the Museum of Abstract Spanish Art in Cuenca, Spain, which years later he also gave away to a foundation.

There you have it—a double identity of Spanish and Filipino.

A year before his death from a heart attack in Rome on June 2, 1984, he was bestowed the Medalla de Oro al Mérito en las Bellas Artes by King Juan Carlos of Spain. In 2006, he was awarded the Presidential Medal of Merit by President Arroyo, 22 years after his death.

Zóbel had no formal art training. He took up medical studies in University of Santo Tomas.

Back in Manila, he worked for a time with his family’s real-estate and development corporation. But, like with his nephew Jaime, the artist in him struggled with the business tycoon.

He had doodled images of knights in his early teens. During the war, while bedridden for a spinal deficiency, he took up sketching to pass the time.

He started painting in Harvard in the late ’40s, in the style of the Boston artists he met. In Manila in the early ’50s, he befriended the Filipino modernists and bought their works to give them support.

While briefly enrolled in the Rhode Island School of Design in the mid-’50s, he came upon an exhibition by Mark Rothko. And so he started imbibing the themes, styles and techniques of Abstract Expressionism in its early years.

This was when he committed himself to modernism and started the “Saeta” series.

The paintings allude to that Spanish liturgical song sung from the balcony and addressed to the passing statue of Christ in the Holy Week procession.

The title means “arrow” or “dart,” and the song is of such “mournful power, plaintive emotional intensity, and dramatic charge” that it could only have come from the pierced heart of the Mater Dolorosa. This Zóbel has captured on canvas with gradients, spiky lines, ethereal color tones, and the use of surgical syringe (to achieve lines he describes as “long, fine and controlled”).

In the late ’50s, he became interested in Chinese and Japanese art and studied East Asian calligraphy. It resulted in a series of paintings embodying his concept of black as a color, the “Serie Negra.”

Zóbel is thoroughly identified with abstraction, muted color tonality and monochromatics, of which, of course, he is a master. This has been reinforced by the popularity of the “Saetas” and the “Serie Negra.”

In fact, the artist has also done some figuration and landscapes. And in the early works, he achieves the color vibrancy of Rothko; while in the late works, he approaches the savage colorism of the Fauvists (as in “Self Portrait on the Wall,” his homage to Matisse, part of a series called “Dialogos” he was working on before his death).

This, from a critic: “The color masses appear to vibrate with a misty, magical quality. An ethereal luminosity suffuses the painting, dissolving all tensions of form and contrasts of tones into an inner glow. Restrained yet deeply evocative, it gives the feeling of containing some burning truth, as if it represents the embodiment of long and arduous meditation.”