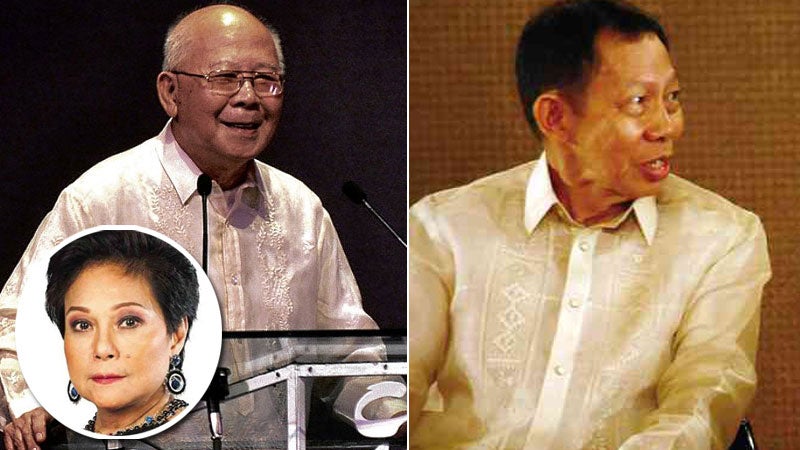 MANILA, Philippines–The fight is far from over, as far as the Superstar’s supporters are concerned.

Inevitably, the noninclusion of actress-producer Nora Aunor on the roster of newly declared National Artists has resulted in numerous complaints among artists and ordinary citizens alike—with the most vehement objection coming from a National Artist and the chair of the National Commission for Culture and the Arts (NCCA).

Some protesters took to Facebook and Twitter to express their dismay. But National Artist for Literature Bienvenido Lumbera took the case to the media, mincing no words in his statement.

“The Office of the President owes the CCP (Cultural Center of the Philippines) and the NCCA an explanation for the insulting disregard of the choice of Nora Aunor for national artist. I ask fellow national artists and other artists to protest this insult to the rigorous process of choosing national artists,” Lumbera said.

Past National Artists serve on the final deliberation panel, which consists of the chairs and the joint boards of the CCP and the NCCA.

Composer Ramon Santos (music) was also proclaimed a National Artist but he was elected as early as 2009.

“Nora is a popular choice,” Lumbera told the Inquirer in a phone interview on Sunday. “She was chosen as National Artist not by fans, but by a panel of experts who discussed, dissected and deliberated on the nominations thoroughly.”

Lumbera decried Malacañang’s dismissal of the selection process. “We want to hear the President’s explanation.”

The proclamation that emanated from the Office of the President, however, noted: It “is well within the President’s power to proclaim all, or some or even none of the recommendees … without having to justify his or her action.”

Emily Abrera, chair of the CCP board, concurred, saying that “the President doesn’t need to explain anything.”

Lumbera acknowledged: “That may be true, but the general reaction of the people is that we need a clarification. The President should have the decency to tell us what happened.”

Communications Secretary Herminio Coloma said the President’s choice of this year’s National Artists was based on national interest.

“We are certain that his decision was based on what will best serve the national interest because the Order of the National Artist gives recognition to those who excelled in the arts and letters, and embodied the goodness and nobility of the Filipino people,” Coloma said over Radyo ng Bayan.

De Leon encouraged Aunor’s supporters to start a campaign and “write to the President, to appeal for a reconsideration.”

“Concerned groups should initiate this move,” De Leon told the Inquirer in a phone interview on Sunday. “Even a President can change his mind.”

Abrera agreed: “People can appeal … in fact, there is an online petition now.”

She was referring to the petition started on Change.org by the Nora Aunor for National Artist movement. The online petition had gathered 1,960 supporters before it closed after exceeding its original limit of 1,000 a few days ago.

The National Artist Search Committee/Secretariat convenes every other year.

Is Aunor’s case similar to that of Santos, who was also rejected by former President Gloria Macapagal-Arroyo only to be reinstated by the Supreme Court?

“It looks similar at first glance, but [Santos’ case] reached the Supreme Court because there was grave abuse of power then. I don’t think the same issue (grave abuse of power) can be raised against the current President,” Abrera said.

De Leon and Lumbera disagreed with Abrera, saying that Aunor’s case is precisely the same as Santos’.

“Aunor’s name can be included in the next batch, and if the next President will not have any objection, she can become a National Artist,” De Leon said.

De Leon agreed with calls for a need to reform certain parts of the process—particularly, the involvement of politicians and the veto power of the President.

“The process should be shielded from politics. But it’s a presidential award,” De Leon said. “Also, the CCP and NCCA are government agencies.”

Lumbera recalled that, in 1989, during the time of the President’s mother, President Corazon Aquino, “she didn’t meddle in the decision of the joint boards of the CCP and NCCA”—even if one of the honorees then was National Artist for Music Lucrecia Kasilag, a known supporter of the Marcoses, political rivals of the Aquinos.

“Wala siyang pakialam (She didn’t meddle),” Lumbera said of President Cory. “It was expected that the President would respect the decision of the committee.”

Lumbera and De Leon addressed the “morality” issue that was reportedly used against Aunor.

“Issues of morality have nothing to do with the selection of national artist,” Lumbera said. “If you will study the lives of past National Artists, you can say that some were not exactly ‘moral.’”

Aunor was arrested for illegal drug possession at Los Angeles International Airport in 2005.

“The morality issue was raised during the deliberation, but it was quickly disregarded by the panelists and she eventually passed all the stages, including the final deliberation,” De Leon said.

“What stood out was that she deserves to be National Artist. Like what National Artist for Literature F. Sionil Jose said: ‘Nora’s performances are so exceptional that she makes even bad films look good.’”

Aunor’s name, along with those of the five other artists who eventually became National Artists, was submitted to Malacañang in October 2013.

Composer Santos was conferred the honor National Artist for Music after a five-year wait. Santos was elected in 2009 but was dropped from the list by then President Arroyo, who added the names of komiks novelist Carlo J. Caparas, theater artist Cecile Guidote-Alvarez, architect Francisco Mañosa and fashion designer Jose “Pitoy” Moreno.

The Supreme Court eventually upheld the elevation of Santos, Alcuaz, Francisco and Conde as National Artists, and voided the proclamation of Caparas, Alvarez, Mañosa and Moreno.

On Friday night, however, only Santos was proclaimed, while Alcuaz, Francisco and Conde were not mentioned.

Boy Palma, Aunor’s manager, said: “We’re not giving up. Just the thought that many people believe that she deserves this recognition is enough for us. In God’s time perhaps.”

On Friday, the night of the proclamation, Aunor was on the set of her latest movie, Joel Lamangan’s “Hustisya,” an entry in the Cinemalaya Philippine Independent Film Festival, which will be held in August.

Lamangan told the Inquirer: “We never discussed the National Artist issue on the set. She remained focused on her work and she was so good in all her scenes that day.”

Aunor has three other indie movies in the can: Adolfo Alix Jr.’s “Padre de Familia” and “Whistleblower” and Perci Intalan’s “Dementia.”

“She is at the peak of her powers,” Lamangan said. “In our hearts, we know she is a National Artist.”–With a report from Christian V. Esguerra