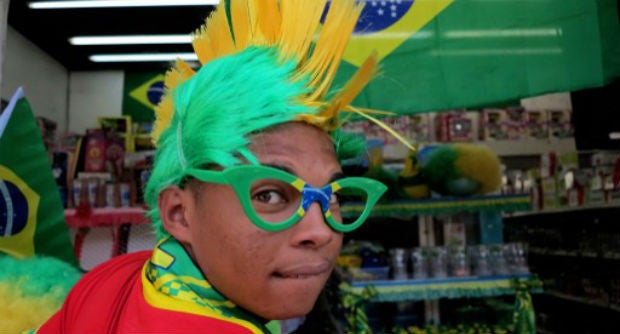 A Brazilian fan purchases souvenirs in a store in Belo Horizonte, on June 06, 2014, a few days prior to the start of the 2014 FIFA World Cup in Brazil. AFP

SAO PAULO — World Cup fans are expressing their love of the game in wild ways, wearing patriotic nail polish, dressing up dogs with jerseys and showing their passion under the sheets with Brazil-inspired condoms.

The usual football frenzy fashion is on full display in the South American host country’s streets and stadiums, from the inevitable replica team jerseys to colorful wigs and flag-themed face paint.

But pet owners, fashionistas and love-struck fans have found their own ways to wear their team colors, with Brazil football kits for dogs, designer clothes for women and caipirinha-flavored condoms for couples.

In the sprawling business hub of Sao Paulo, World Cup souvenirs — from the kitschiest to the trendiest — can be found anywhere, from upper-class neighborhoods to bustling street markets.

In one well-to-do district, the MVet pet store sells a yellow, round doggie poop bag dispenser with a football printed in the middle.

But the hottest-selling item is the $14 yellow dog shirt with the number 10 printed on the back, just like Brazil’s star forward Neymar. Eighty have sold so far.

“It’s cold here now and he looks cute, and we’re in the middle of the Cup,” said Regina Saccarelli, a 34-year-old architect who bought the outfit for her Maltese.

Around the corner, women get discounts to paint their nails in the colors of their favorite team, with Brazil’s yellow, green and blue the most popular.

A manicure with two nail appliques (choices include Rio de Janeiro’s Christ the Redeemer statue or leopard prints) goes for $13.

“In addition to dressing up for the games, we always want to have our nails done,” said Marina Jorkevics, the 28-year-old marketing director of the Nailsxpress salon.

“This is another reason to have them done and it looks nice.”

Local fashion designers have joined the party, making blouses, purses and dresses for women who want to show team spirit without having to wear a football jersey.

“Anything goes at the World Cup. If it’s to celebrate, cheer, it’s worth investing in fun objects,” Paula Acioli, a fashion consultant and professor at Getulio Vargas Foundation University, told AFP.

Italian, Dutch and Russian tourists have forked over between $26 and $35 for green and yellow sleeveless shirts with leopard and zebra prints at Mamy de Silveira’s Essere Fashion store.

“There’s a lot of patriotism in Brazil despite the protests and strikes,” said Silveira, referring to a wave of demonstrations against the costs of hosting the World Cup.

“People like to cheer for Brazil by wearing things that stand out.”

Love of country has even made it into the bedroom.

Sold under the Prudence brand, the condom is yellow with a green tip. The first 850,000 were supposed to last three months but sold out in 15 days. A pack of three sells for $1.40.

“I think there must be foreigners who will take it home as an inexpensive souvenir,” said Daniel Marun, DKT’s Brazil director.

“What’s important for us is to pass on a message of safe sex, but also fun and pleasurable sex.”

‘From head to toe’

Mariane Vicente, a parliamentary advisor, was sifting through a pile of football-shaped hats. For Brazil’s game against Mexico last week, the 27-year-old wore a sequin dress in the team’s yellow, green and blue colors.