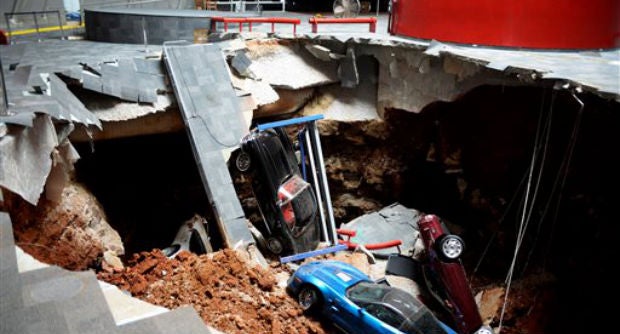 A massive sinkhole that swallowed eight cars at the National Corvette Museum in the US has become such a popular attraction that officials want to preserve it. They may even put one or two of the crumpled cars back inside the hole.

The board of the museum in Kentucky voted Wednesday to preserve a large section of the sinkhole that opened beneath the museum in February.

The damaged cars toppled like toys amid rocks, concrete and dirt. The cars carry a total value believed to exceed $1 million. The cars were eventually pulled out of the giant hole to great fanfare.

Museum officials say attendance is up nearly 60 percent from March to the start of this week. The museum sells sinkhole-related shirts, post cards and prints.

The museum struggled in prior years to keep its doors open, museum officials said.

Sinkholes are common in the area, located amid a large region of karst bedrock where many of Kentucky’s largest and deepest caves run underground.

Sinkhole swallows cars at Corvette Museum in US