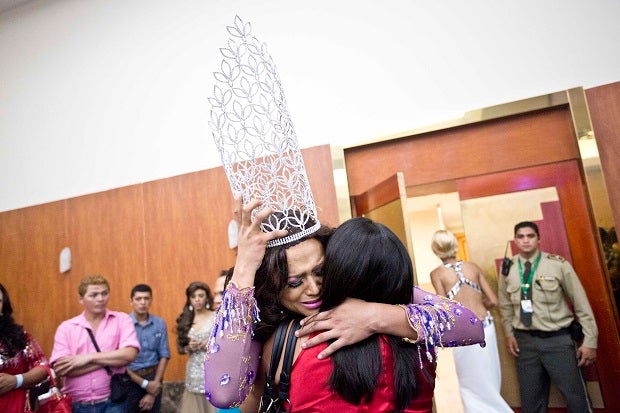 In this Friday, June 20, 2014 photo, Carlos Castro, 19, holds his crown as he hugs his mother Claudia Gonzales after winning this year's annual Miss Gay Nicaragua beauty pageant in Managua, Nicaragua. It was the culmination of a lot of work by the 19-year-old agronomy student, who represented the province of Leon, and received a tiara valued at $2,000, a $5,000 cash prize. Castro will now have the opportunity to travel to Thailand as Nicaragua's representative in Miss Queen International. AP

MANAGUA, Nicaragua — Carlos Castro hugged his mother and wept after the announcer named him Miss Gay Nicaragua 2014. It was the culmination of a lot of work by the 19-year-old agronomy student and the beginning of a lot more.

Castro, known as Amerika Ithzell Korkobas Berdrinadxy, will now visit several provinces in the Central American nation in the role of Miss Gay Nicaragua seeking to raise awareness about sexual diversity and gender identity and to help fight discrimination.

“I’m happy, ecstatic, satisfied because the work was not easy. There were months of catwalk, makeup that helped me and other beauty queens to prepare,” said Castro, who won the contest in a shiny purple gown decorated with beads and rhinestones. “I think the judges liked my charisma and my humility and that I’m crazy on the runway.”

Dozens of contestants paraded down the stage of a hotel auditorium in Managua last week wearing exuberant traditional dresses, evening gowns embellished with sequin and feathers and in swimsuits as they competed in the beauty pageant.

Castro, who represented the province of Leon, received a tiara valued at $2,000, a cash prize of $5,000 and the opportunity to travel to Thailand as Nicaragua’s representative in Miss Queen International.

For six months prior to the pageant, contestants attended workshops about sexual diversity and HIV. They also visited people living with HIV, and helped young victims of discrimination by buying them food and corrugated metal sheets to strengthen their homes.

“The event is important to raise awareness in society, for people who are sexually diverse to be united and for the girls to start enriching their gender identity,” said Miss Gay Nicaragua’s organizer, Julio Sanchez. “It’s is also a way to fight against homophobia.”