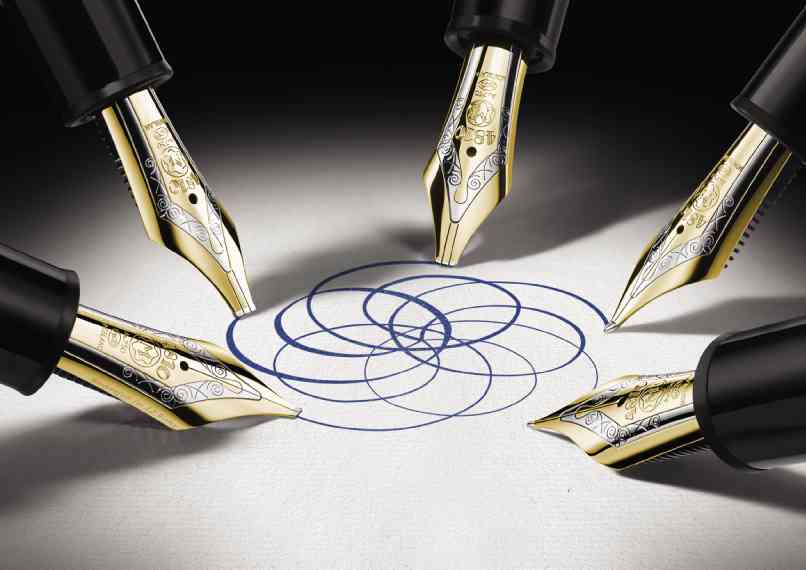 The preferred pen of Obama, Pope Benedict and the Dalai Lama turns 90

HAMBURG, Germany — It’s easy to dismiss the relevance of writing instruments in the digital age, when humans are seemingly inextricably bound to their mobile phones, tablets and other electronic communication devices.

But makers of luxury pens insist that, in fact, with every iPhone that’s sold, pens increase in value.

“It’s a strange thing, but maybe not too hard to understand,” said Christian Rauch, Montblanc International managing director for writing culture, leather and jewelry, at the Montblanc headquarters in Hamburg.

Rauch noted that people’s need to communicate has intensified, with practically everyone constantly writing—via text, e-mail, Twitter, etc.—be it on a plane, in a car, in a restaurant.

“They don’t necessarily do it on paper, but they write… a lot,” he stressed. “We’re all confronted with impersonal notifications. You receive text messages for your birthday, Christmas. Here in Europe, for Easter. Then you discover 20 other people are copied in the same message. What’s the worth of this message? The more of these messages we have, the higher the value of the handwritten word.”

He added: “We all love e-mail, but for some specific moments, when you really want to be personal, writing is more distinctive than ever before.”

Even in business, Rauch said, the simple act of handwriting the salutation gets better attention than when it is just e-mailed.

“More and more people are discovering that. It’s not a mass phenomenon,” he said, quickly adding, “and we are not a mass manufacturer.”

Montblanc is one of, if not the most, eminent manufacturer of writing instruments in the world. The Meisterstück, its iconic pen first created in 1924, is marking its 90th anniversary this year.

Rauch’s passion for writing implements stems from experience. When he graduated from university 20-odd years ago, just when the first generation of mobile phones were rolling out, his parents gifted him with his first Montblanc pen.

“I liked it but I didn’t know what to do with it,” he recalled.

These days, an iPhone or an iPad would be easy choices if you asked a kid what s/he wanted for graduation, noted Rauch, who joined Montblanc in 2009. But as soon as a new phone or tablet model comes out, “the desire for this will be from 100 to 20.”

He said he’s glad his parents got him that Meisterstück years ago, as it has seen him through every milestone of his life. “It’s worth more than ever before. Whenever I do something important in my life, like the first letter to my wife, I wrote with that. Every important document that I have to sign—and believe me, I have so many fountain pens now after all these years, from which I can pick—but for the important things, I always pick this one. It had increased in emotional and economic value.”

The current face of Montblanc’s global promotional campaign is Hollywood actor Hugh Jackman. But perhaps the luxury company does not even have to pay celebrities to sell its products, as world leaders from popes to CEOs have been photographed signing crucial documents using a Montblanc pen. (Think Barack Obama, Warren Buffett, the Dalai Lama, Pope Benedict.)

There’s one wall in the Hamburg headquarters displaying photos of these world leaders clasping a Meisterstück and its six-point Montblanc white star logo.

It’s notable how the German company has risen to such prominence, even as Rauch pointed out that Montblanc didn’t invent the fountain pen. “But we created a fountain pen that our founding fathers said had the quality level that can be compared with the highest craftsmanship standards in Europe, the highest mountain [Mont Blanc].”

Montblanc was founded in Hamburg in 1906 by three German men.

“Normally, they would’ve said ‘Made in Germany’ [to highlight] this highest kind of innovation and craftsmanship,” Rauch said. “Yet it’s not seen only as a German brand, but rather a European brand. The only thing that remains German is [the name] Meisterstück, which we never changed to any language because we like it so much.”

The word means “masterpiece” in German.

Montblanc is known for creating limited-edition pieces for its avid collectors around the world. Its product line has, through the years, expanded to include leather goods, timepieces and jewelry. (The most expensive Meisterstück pen to date is valued at 2.4 million euros.)

For the 90th year of the Meisterstück, one of the most recognizable symbols of luxury, Montblanc has created for the first time rose-gold nib fountain pens, and engraved with the number “90.”

Each is elegantly wrapped in a replica of the original 1924 yellow-gold sleeve, only now it’s in rose gold. There are also versions in roller ball and ballpoint.

Collectors are expected to zero in on the Limited Edition 90 of this collection, fountain pens and rollerballs in LeGrand size, limited to 90 pieces each. They feature a cap ring with 90 diamonds and mother-of-pearl emblem, valued at 29,000 euros apiece.

Montblanc is decidedly a masculine brand, with less than 10 percent of the merchandise geared toward women. But Rauch pointed out that 40 percent of Montblanc customers are women, because “women like to wear the same symbols of success as men do,” he said.

All of Montblanc’s writing instruments are still made in Germany, in a sprawling office complex and factory in the outskirts of Hamburg. (The watches are made in Montblanc factories in

Switzerland; the leather goods in Italy; the jewelry in France.)

Even as the company now offers a vast selection of merchandise, Rauch said the core of the business remains the pens. Montblanc is part of the Richemont luxury conglomerate.

Of the 105 steps to make a fountain pen, 35 are about the nib, the distinctive metal part of the pen where the ink flows out. Each nib is made of solid gold material with an iridium tip.

At the Nib Manufacture department in Montblanc, artisans work in almost clinical fashion. It used to be that it was only women who were stationed here, they who had the quiet patience to execute the precise measures in the making of a nib. These days, everyone is trained in every step so as not to disrupt production, though only a handful remain experts at two of the most crucial steps.

Unlike typical factories where only a few items are randomly tested for quality, here every single pen is tested before it leaves the factory.

Nearby is the Artisan Atelier, where all collector’s items are handcrafted. By the receiving area are prototypes of some of the most coveted and most exquisite pieces. None of them are functional pens, to underscore the fact that a limited edition is indeed a limited edition.

While Montblanc sometimes create market-specific editions, Rauch said the company has learned that it makes better sense for them to make customer-driven products. Montblanc’s approach is global, even as it comes up with different themes, said Rauch. Even the limited editions are evenly distributed in the world, he added.

This approach has helped the brand weather economic challenges; focusing on a few select and large markets has proved to be a bane for many brands during the downturn, Rauch pointed out.

In the Philippines, Rustan Commercial Corp. is the exclusive Montblanc distributor, its product line available in Rustan’s Makati, Shangri-La and Newport Mall.

It’s not uncommon to find Montblanc pens being auctioned off at Sotheby’s or Christie’s, because the brand has the most avid of collectors. One such fan in the United States, a doctor, doesn’t even open the packaging, according to Rauch, content to enjoy each pen in his collection under an X-ray machine. So as not to mess up with the economic value of such pieces, Montblanc doesn’t repair used and damaged pens.

A few years ago, Montblanc also launched its bespoke service, where it designed a software that looks into how a client uses a pen. Worry not, it doesn’t judge how beautiful or awful your penmanship is. It merely looks into the pressure, the speed, the rotation, the inclination angle and the swing of the pen as you write with the “electropen.”

Upon assessment by a Montblanc expert, a nib best suited to the client’s handwriting is recommended. There are some 300 clients for this service so far.

As for Rauch, he said that nothing will make him part with his first Meisterstück, surely echoing the sentiment of every collector.

“I will never sell that one, no matter how poor I become, [even if] live on the streets of Hamburg,” he said. “The iPhone, I love it, but the next one that comes along, I’ll love better. There’s an increasing hunger for things that keep their value, not only the economic, but the sentimental value.”