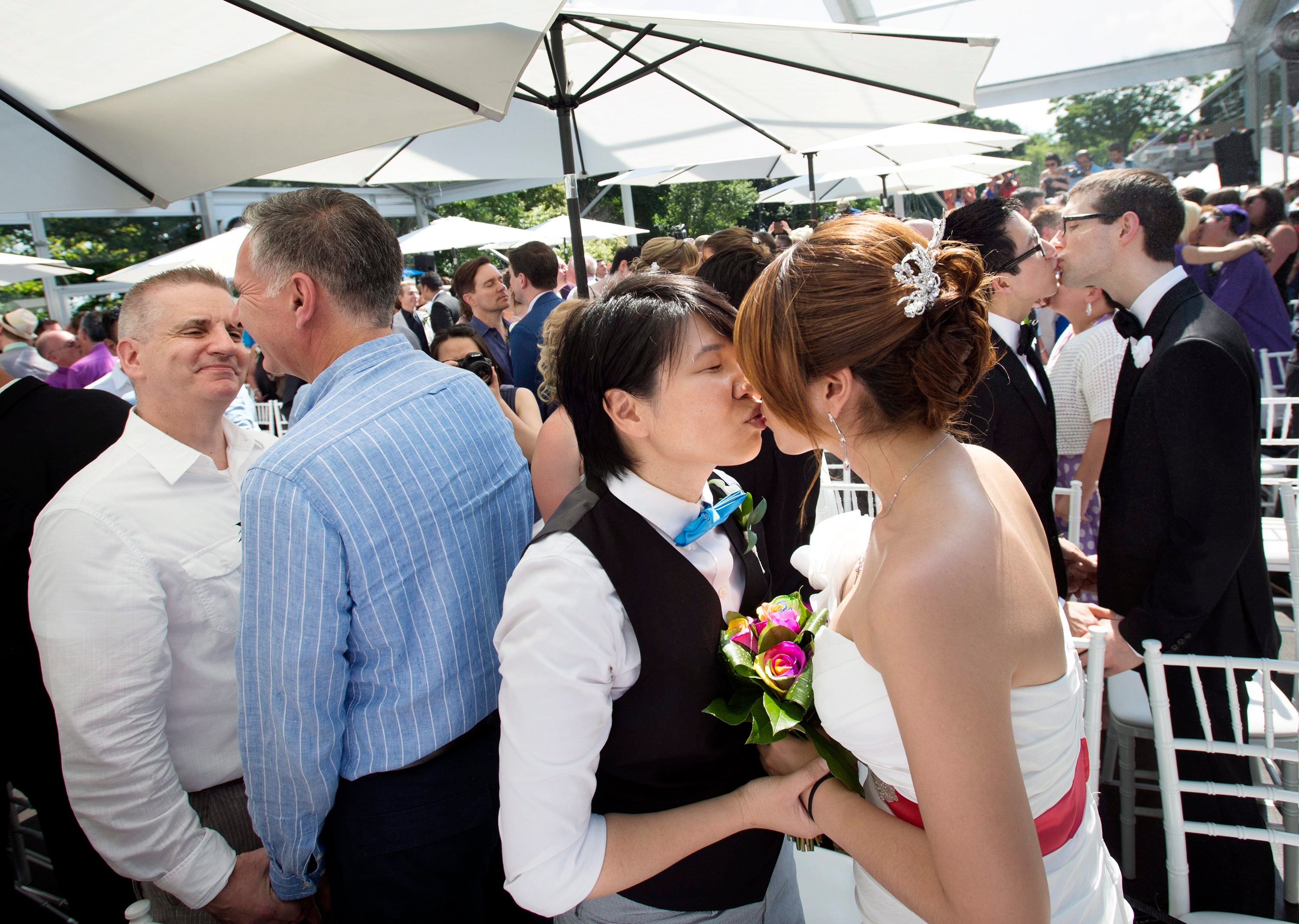 TORONTO–Australians Richard Laslett and Collin Gunther waited 37 years to say “I do” to one another.

The couple finally got their chance on Thursday in Toronto, at a mass wedding that brought 115 gay and lesbian couples together, as part of the city’s World Pride Week.

The pairs from around the world gathered in the garden of a midtown Neo-Gothic castle to “celebrate the power of love,” Toronto interim Mayor Norm Kelly said.

“After a while, you think it’s never going to happen,” Gunther told AFP moments before the men exchanged vows. “You settle into a relationship,” added Laslett.

Swept up in the moment while traveling abroad and confident that their marriage will someday be recognized back home, they took the plunge.

“We’ll call ourselves husband and husband,” said Laslett, “even though our marriage won’t be recognized when we go home” to Melbourne, Australia.

Canadian gays and lesbians have been tying the knot since June 2005, when a series of court decisions forced Ottawa to legalize same-sex marriages on the basis that denying them was discriminatory.

In Casa Loma’s magnificent gardens, couples dressed in white gowns and black tuxedos sipped champagne from flutes and chatted with guests among the flowers and water fountains, under a hot sun.

More than 200 couples were originally expected by organizers hoping to break a world record, but many were unable to arrange travel or obtain a local marriage license in time for the event.

“This is not a pretend wedding. It’s the real thing,” said host Nick Di Donato.

Couples traveled from as far as Australia, Ghana and Taiwan to wed.

“It’s an opportunity for them to publicly express their love and commitment to each other,” Di Donato said, even if their marriages may not be recognized or legal in their home countries.

The event also marked the first time a Sikh minister has presided over a gay marriage, according to Yogi Akal. No Sikhs, however, were married at the event.

The Sikh faith does not specifically decry homosexuality, “but there are personal and cultural biases that exist,” Akal added.

Nevertheless, “religion doesn’t belong in the bedroom,” he said.

‘No different from anybody else’

“I think it’s about time the world celebrated us and this kind of relationship. Because we are no different from anybody else. But we have to do something like this to make this statement to the whole world that our relationships are just legitimate,” said Nora, who said her vows at the mass ceremony.

A heterosexual couple at his mosque, for instance, were fine with being married by a woman, but not a gay man.

On the other hand, he said: “Some conservative Muslims also embrace gay marriage, because they believe gay men should not be exempt from the rules of Islam: everyone must be married to have sex,” he said.

Breaking in, his partner Troy Jackson suddenly got down on one knee and proposed to Khaki.

“I just called my mother (in Eastern Canada). She screamed, and congratulated us,” Jackson said later.–Michel Comte