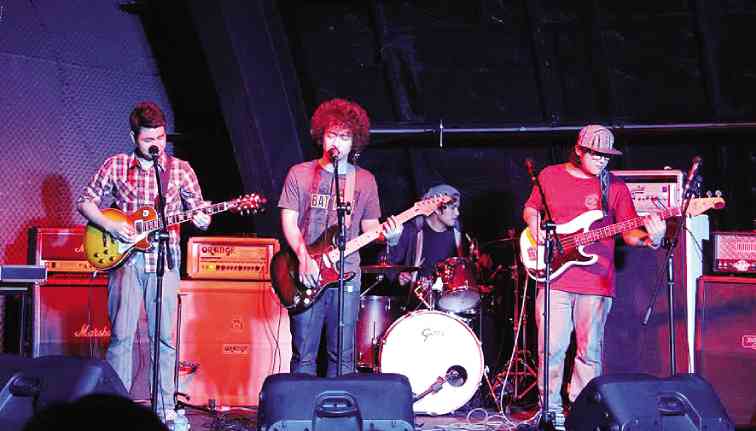 If there’s one thing we’d like to thank the French for, aside from decadent pastries, it’s Fête de la Musique.

We’ve been enjoying international acts through various music festivals lately, but the one event that we always looked forward to was Fête in Manila.

In our younger years we couldn’t attend some of its editions, but the ones we remember were the two that were held at El Pueblo in Ortigas Center about a decade ago. There were performances in the bars in El Pueblo while the main shows were held around the area outside.

In recent years we learned that Fête was being held in different, separate venues, which we weren’t happy with. The problem was, what if we wanted some hip-hop acts after watching rock bands? Surely they wouldn’t be in the same venue.

And since the fest is held on June 21, which is summer in other countries but unfortunately a rainy month here, we thought it was inconvenient to walk some distance from one stage to another.

It was only during Fête 2014 in Manila that we understood why it was no longer ideal to hold the performances in one place.

Fête de la Musique is actually a worldwide event held in different cities; we were fortunate that the local promoters mounted it in two locations this year.

Three main stages and 19 pocket venues in Makati and Manila showcased around 200 acts in celebration of Filipino music and, incidentally, the 20th anniversary of the festival’s Philippine edition. Imagine 200 acts, multiplied by how many music fans!

We checked out the indie stage in 12 Monkeys, a newly opened bar on the fifth floor of Century City Mall; the main stage on A. Venue’s open parking lot; and another stage at B-Side.

The indie stage was for young, upcoming talents. Unfortunately we didn’t catch The Ransom Collective and Ourselves the Elves, which joined a battle-of-the-bands competition a couple of months ago. The others that we saw, however, were worth the standing and peeking-over-shoulders just to get a glimpse of the action onstage.

It was amazing to see college bands playing their own songs. Sud Ballecer, frontman of Sud, was the winning vocalist in a form-a-band-search last year; he and his bandmates hail from the University of Santo Tomas Conservatory of Music.

One thing we noticed, though, was the amount of influence an established band could have on younger, impressionable acts. During one of the performances, a friend of ours asked, “Why do they sound like Up Dharma Down,” to which I replied, “That’s actually the third band that sounds like Up Dharma Down.”

The sky was getting a little dark, so we decided to check out the main stage at A. Venue lot. French Ambassador Gilles Garachon was there.

We were just in time to catch Radioactive Sago Project—bouncy horn section, frontman Lourd de Veyra’s wit and all. Joining them on stage were Queso’s Biboy Garcia and Kat Agarrado of Sinosikat. Sago’s spoken word/jazz-rock music had people dancing while laughing at De Veyra’s humorous lyrics.

There was a mixed crowd of local fans, expats and even bystanders.

It was already drizzling during Sago’s set, and the raindrops had gotten big by the time Agarrado sang. Many in the audience sought shelter in surrounding establishments, while we opted to go back to the indie stage.

But we had to go back to A. Venue to watch Pedicab. Diego Mapa and the rest of the guys got the crowd excited and dancing to the song “Automatic.”

Next on our itinerary was B-Side at The Collective along Malugay Street, where the rock, ska and reggae stages were. Aggressive rock ’n’ roll was performed al fresco, while a relaxed rasta vibe flowed within the indoor air-conditioned area.

The crowd here had skaters and punks in one massive congregation. Compared to the punk kids we moshed with and saw slam-dancing years ago, however, this was a more behaved, well-mannered bunch, obviously just there to enjoy the music.

We wanted to check out the ska and reggae bands, too, but there was only about two meters of space left to stand on.

We had never seen this many people in that place before; we couldn’t even see who was performing. But it was obviously a happy, feel-good crowd, as we saw people grooving to a Tropical Depression song even if we stayed for only a few minutes.

Fête de la Musique gave us reason again to go out, explore music and have fun. We didn’t get the chance to visit the other stages but what we saw was enough to be convinced that the event attracted a considerably large number of people.

We are fortunate and proud to have our country as one of  the venues for Fête de la Musique, but it brings us greater pride to know that the Philippines is home to hundreds of artists playing their own songs.

The performers didn’t include mainstream pop acts, yet there was apparently so much talent at the festival.

If the event’s sponsor, the Alliance Française de Manille, believes that there is enough Filipino musical talent to showcase in a day-long festival, we wonder why Filipino promoters have never dared to produce a local event of this magnitude.